You are here: Home / News / World Premiere Video: “The Mirror” by Laura Rabell

Growing up in Florida, Laura Rabell’s childhood was filled with music. She sang in the Pensacola Children’s Chorus, took piano lessons, and performed in musical-theater productions. But she never gave herself permission to pursue music as a career. Putting her passion for music on the back burner, Rabell ended up working a corporate gig in Charlotte, N.C., after college. But after a few years of careful planning to make it all possible, Rabell and husband EJ packed up and moved to Nashville. Once there, she finished writing the songs that became her first album. 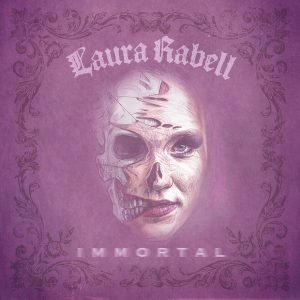 Rabell had proudly announced her debut record to fans, friends, and family via email blast in early 2019. The big reveal? The album would be called … Immortal. Three weeks later, she was diagnosed with breast cancer. She laughs darkly at the recollection: “I guess you shouldn’t call the Titanic unsinkable,” she says. “I guess you shouldn’t call your first album Immortal. You’re just asking for it.”

But Rabell battled through cancer treatment and the album was released in 2020. And now comes the world premiere video for “The Mirror.” Smoky, twisty and self-deprecating, “The Mirror” perfectly distills Rabell’s aesthetic. And the song’s new video is a fitting complement, comprised of footage from the last two years—just after she started chemo; later, after losing her hair; and more recently with her new short hair growing back. The video—in which Rabell and her bandmates smash a half-dozen mirrors—deals with body image and also how music gave her hope to persevere through this dark time in her life.

DittyTV is pleased to offer the world premiere for “The Mirror” here, and then tune in to The Curve on Wednesday night, March 3, for the DittyTV Debut at 11/10c on The Curve.