We have a two-for-one treat for you this week with Leslie Stevens. We hope you enjoy the world premiere video (above) for her new single, “Teen Bride,” from her album Sinner. Then tune to The Curve Wednesday night, Sept. 25, at 10 p.m. CDT for the Ditty Debut of the song on the network.

In addition to the world premiere video, DittyTV Senior Editor Tim W. Jackson caught up with Stevens for a DittyTV 5 Questions segment.

1) First, as we’re premiering your brand new video for “Teen Bride” (above), which has an awesome retro feel to it. What can you tell us about the making of that video?
Since pregnant teenage girls have been forced to marry by their families throughout the decades, we wanted to tell the story and have it stretch over time—for it to feel old and older at the same time—but not really stamp any specific year on it. We used a camera from the ’70s. But it’s got clothes from the ’70s, ’80s, and ’90s, and you just kind of can’t tell when it’s happening.
Sarah Hamblin directed it. It’s her second video and she shot it on an Ikegami, a tube camera from the 1970s. I was really lucky to work with her. She’s based in New York and has worked on a bunch of really creative shows, currently directing segments for The Daily Show. 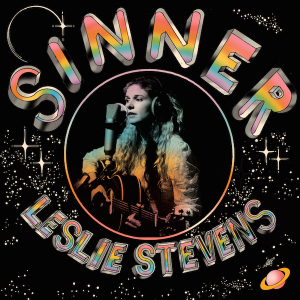 2) “Teen Bride” is from your new album, Sinner, just released last month and produced by Jonathan Wilson. What can you tell us about the other nine songs on the album and about that recording process and players involved?
I love Jonathan Wilson and have always been a fan of the way he records and plays, so it meant a lot to me that he dug the demos and wanted to produce the record. We had a great time. It wasn’t always comfortable but when you are challenging yourself creatively I think it’s nice to get used to being a little bit uncomfortable but also in a sort of peaceful mode, if that makes sense.
I’m a big fan of funk and lots of different genres (can I give a shout out to Tales From The Tour Bus?! Both season one and two. Love that Mike Judge show), and Jonathan Wilson had asked James Gadson to play drums and Gadson was on some of the songs on the very first mix tapes I ever had and I was in awe that he was going to play drums.  The other players from the record, are all monsters but wow it was not something I thought I would be lucky enough to do in this lifetime. 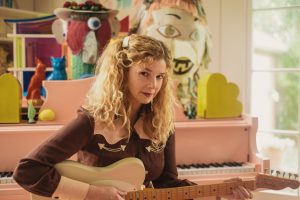 3) Because you’re based in L.A., I know you get comparisons to the Laurel Canyon scene of the ’70s, but who were your earliest musical influences?
I have been influenced by the Laurel Canyon scene, it’s true,  but I also have some diverse influences. One of the very first shows that really moved me was Neutral Milk Hotel’s In The Aeroplane Over The Sea. Seeing that show live is the reason I play the saw. Also Jim James of My Morning Jacket moved my soul deeply the first time I saw him play. I was completely heart struck by the beauty of the emotional connection between him and the audience. I have worked with Jim on a couple projects, a record he produced for Jonny Fritz, and I also sang on Jim’s record, which was on the ol’ bucket list for me. Dreamzzzz! I also love Gillian Welch and Emmylou Harris, John Prine, and Becky Stark, oh I love Billy Joe Shaver as of recently. Also, I’ve lived in Cali forever, since I was a teenager, but I’m from Missouri originally.
4) You’re on tour now in the U.S. and just finished a leg of the tour in Europe. What’s your most incredible tour moment over the past few months?
Having Sinner, the record, come out while playing festivals in Europe was an amazing feeling. It makes you feel pretty real as an artist. It’s just my personality to wake up every day and wonder if I’m still really a singer. I pinch myself and feel gratitude, but it’s also this feeling of I want to be better and keep getting better. The U.S. tour, I’m playing some places I have never played. But I hope you all can come see us before this tour is done!
5) You’ve performed with an array of acts from Florence + the Machine to Father John Misty (and including the two just mentioned), but if you could open a show for any musical act currently in existence, who would it be and why?
To set the record straight here, I didn’t ever sing live with Florence but I sang on her record. But that is a great question.  I would open for Fleetwood Mac. So many good answers to this question, though.