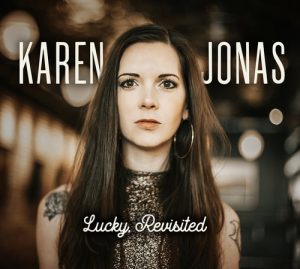 With her new album, Lucky, Revisited, just released July 19, DittyTV is happy to present the World Premiere for the Karen Jonas video “Ophelia.”

Catch the DittyTV Debut of this video during The Curve on Wednesday, July 31, at 10 p.m. CDT.

The song initially was on Jonas’ 2016 Country Songs album. Lucky, Revisited features two covers plus songs from Jonas’ previous three albums, re-recorded in a more stripped down, acoustic setting than the originals. This version of “Ophelia” sounds a bit more like the version you’ll hear when seeing Jonas live.

“Guitarist Tim Bray and I have been playing 150+ shows a year together for six years now,” Jonas says. “Our sound has grown and matured since the original recordings of these songs, so I wanted to make a record that reflects that. We didn’t ‘reinvent’ any of these songs for Lucky, Revisited, we just captured them as they are today. I’m really happy with how it turned out. The dynamic, nuanced play between Tim’s guitar and my vocal reigns supreme throughout the album, just like in our live show.”

As for the video, Jonas says it was shot in a friend’s old barn. “We climbed up a rickety ladder to the second floor there, and in our quest to move some old tarp-covered church pews out of the way, we encountered hundreds of wasps,” she says. “We muscled through with the help of our very patient videographer, Ryan Poe, and a few cans of wasp spray, and managed to make this boot-stomping fun video anyway! You may be able to see a wasp fly by if you watch really carefully.”

Check out the video and look for those wasps! And be sure to tune in during the 10 p.m. CDT hour on July 31 for the DittyTV Debut of this video on The Curve!