You are here: Home / News / World Premiere Video: “No Time to Get Bored” by Lara Hope’s Gold Hope Duo 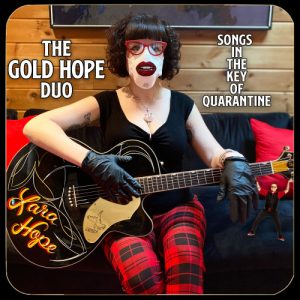 “Stuck at home?” asks Lara Hope. “Nowhere to go? Tired of quarantine? ‘No Time to Get Bored’ is the first single off of our new pandemic-inspired album, Songs In The Key Of Quarantine.”

Winner of the 2017 Ameripolitan Music Award for Best Female Rockabilly Artist, Lara Hope is known as the front woman of her band Lara Hope and the Ark-Tones. Lara and her husband, Matt, also play as a duo, Lara Hope’s Gold Hope Duo, and just self-released the very topical album called Songs in the Key of Quarantine, which is now available worldwide.

Describing their sound, Hope explained to Rockabilly Online, “I would say we are a new take on an old sound. It’s been described as ‘pan-Americana,’ which means we use many areas of early rock and roots music as a creative launchpad. Where it goes from there is anyone’s guess because, while we appreciate old music, we don’t want to write songs that have already been written.”

As for the video for “No Time to Get Bored,” Hope says, “We filmed the video from our new home—which we’ve had a lot of time to settle into—and worked with local filmmaker friends of ours. We had a blast making it. Take our advice, and follow along with the song. We promise you’ll never get bored at home again!”

And now, DittyTV is happy to offer the world premiere from Lara Hope’s Gold Hope Duo called “No Time To Get Bored.”