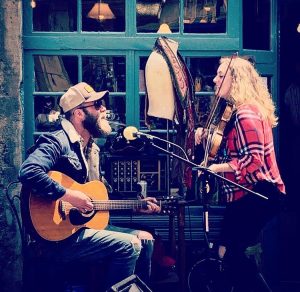 Rocks & Salt is the San Francisco-based roots duo of Jared Griffin (guitar, vocals) and Nicole Ridgwell (fiddle, vocals). As DittyTV offers the world premiere for the duo’s “Kentucky Straight Blues” video, Griffin says, “The video was definitely born out of necessity. We had just recorded the record with Brian Brinkerhoff and Frank Swart of Need to Know Music and needed a video. Having shot and edited music videos from previous bands I knew how laborious and time consuming it is, especially the editing, so we picked the shortest song on the record. We had our insanely talented friend Vitaliy Strokous direct and edit the video, but I’m sure he appreciated the brevity of the song.”

Griffin went on to say that the inspiration for the video came from the subject matter, which is indicated clearly in the title. “It’s about whiskey,” he says, “lots of it and the vicious, manic cycle that comes with that dance. While light-hearted in melody I assure you it’s quite dark.”

The video was shot at The Alley, a bar in Oakland, Calif. “We had about 7 hours to shoot it before the bar opened,” Griffin says. “Get in and get out, which is a lot like our live shows, so I think that helped capture the frenetic energy of the video. All the credit really goes to Vitaliy. He definitely kept the train on the track that day. Little did we know COVID-19 would shut bars down less than two weeks later so we really got lucky with the timing. Hope y’all enjoy it as much as we had making it. Couldn’t have done it without so many friends helping and believing in us. This video is for them!”

DittyTV is happy to present the world premiere video for “Kentucky Straight Blues” here, and then tune in to The Curve Wednesday night, June 24, at 11/10c for the DittyTV Debut. 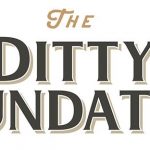 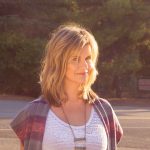 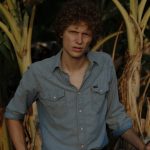