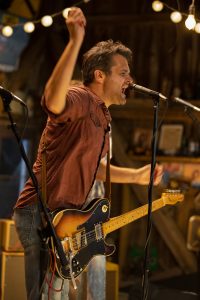 “I’m writing and performing the stories of my life — some truth, some lies, but all real American music,” says Nashville-based singer-songwriter Chad Harvey. “I want people to come away from my shows thinking this is a roots rock guy that plays with the energy of a punk rock band.”

Harvey’s new single is “Heyburn,” from his forthcoming Run From The Sound EP that’s due March 6 via Indie 500 Records. The origins of the song come from the small town of Heyburn, Idaho.

“This song idea came from a friend of mine, Craig Smith. He was traveling through Idaho and stopped for the night in Heyburn. He called me that night and told me about the place and how there was not much going on in the town, and how he imagined that if he lived there, he would want to get out. This struck a chord with me as it reminded me exactly of my hometown of Lynnville, Ind. — a small town of about 500 people in Southwestern Indiana that was built in the middle of the coal mines. Growing up there, all I wanted to do is get out and see what else was out there in the world.”

DittyTV presents the world premiere video for “Heyburn” here, and then you can catch the video on the network Wednesday night, Feb. 5, at 11/10c on The Curve.