You are here: Home / News / World Premiere Video: “Have Some Faith” by Ted Russell Kamp 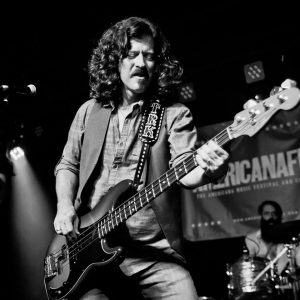 Ted Russell Kamp is a Los Angeles-based singer/songwriter, producer, and Grammy-winning bass player. Kamp also has been a member of Shooter Jennings’ band for most of the last 15 years and played on the 2020 Grammy-winning Country Album of the Year, Tanya Tucker’s While I’m Livin’.

As for “Have Some Faith,” Kamp says, “I co-wrote this one with Matt Szlechetka, a great singer-songwriter and guitar player based out of Nashville that used to live in L.A. I wanted to have a song that was moody and simple in the style of J.J. Cale. This one is about wanting to be loved and trusted. We all have times when we feel isolated and alone and I wanted to write this song about the possibility and the dream of coming together and be connected.”

Kamp went on to say that the song was recorded in his home studio, the Den. “Matt played the great acoustic guitar part, sang harmony, and played the shaker and the cool ethereal electric guitar as well,” Kamp says. “I played the kick drum, bass, Wurlitzer (piano), and sang it. The video footage was taken before a show I did in Uddevalla, Sweden, and was edited by Emily Zuzik.”

DittyTV is thrilled to offer the world premiere video for “Have Some Faith” here, and then tune in Wednesday night, June 24, at 11/10c to catch the DittyTV Debut of the video on The Curve.