Released in 2019, Desert Dove marked a bold new chapter for Michaela Anne, both artistically and professionally. While the songwriting is still very much rooted in the classic country she’s come to be known for, the record represents something of a sonic shift, incorporating more modern production elements than ever before in pursuit of a sound that owes as much influence to indie rock as honky tonk. Despite the bolder, more adventurous arrangements, her crystalline voice remains front and center on the album, a pure, airy beam of light shining bravely into the dark corners of loneliness, pain, and desire that we all so often to try to hide.

We’re happy to offer a world premiere video for one of the songs from that album. But before we get to that, we wanted to let you know more about this wonderful artist and her music in this 5 Questions segment.

1) While you reside in Nashville now, let’s get to know you a bit better. What can you tell us about where you grew up and how music influenced you at a younger age?
I grew up moving every other year from Washington state, California, Virginia, Italy, and back to Washington multiple times. My dad was a submarine captain in the U.S. Navy. So because of that, music was my solace in a way. We would often move in the summertime so I’d spend the months before school started with no friends. We had a piano, though, and making up songs or listening to songs in my room was how I passed the time and didn’t feel as lonely. I also was introduced to many different types of music from traveling and having so many different friend groups. For example, living in Italy I heard Euro-pop on the radio, different places I lived there were larger communities of Filipino kids and they’d introduce me to Filipino pop music and we’d make up dances. I was really into musical theater and jazz and my dad loved country music so that was a staple driving in the car with him. Looking back, it was a hodgepodge of influences that often don’t make much sense together but I think has kept me exploring genres and styles.

2) You’ve taught music, so obviously you encourage music for young people. What can you tell us about your experiences teaching music?
I’ve taught music privately and in class or camp settings for over a decade now. Since the pandemic has sidelined touring, I feel very lucky to enjoy teaching because that’s my main source of income now. Teaching music honestly keeps me connected to the pure innocent joy of music. I love playing and singing and writing songs, but sometimes, when you’re on the hamster wheel of touring, playing the same songs night after night and the business and promotion of music can start to dominate. Teaching is a really incredible reminder of why you started in the first place: when you experience the joy a 5 year old feels playing a minor chord for the first time, or even helping a middle-aged adult sing a song they felt uncomfortable with and challenged by before. I think it keeps my own relationship to music in a really healthy place when I’m working and focusing on others—nurturing, developing, and growing their skills and love for music. 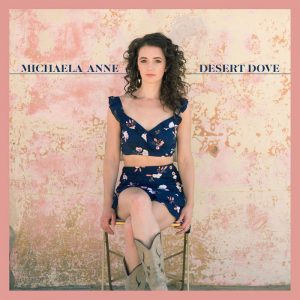 3) Let’s talk about your album Desert Dove, released in 2019 on Yep Roc Records. What can you tell us about recording that album and who were your collaborators on the project? I made that record out in San Clemente, Calif., with Kelly Winrich (of Delta Spirit) and Sam Outlaw. We stayed at the studio for three weeks. It was right on the beach, and had a bunch of incredible musicians play on it including Brian Whelan (Dwight Yoakam), Kristin Weber (Kacey Musgraves, Dolly Parton, Lorde), Whynot Jansveld (Jakob Dylan, Butch Walker, Brett Dennen) and Mark Stepro (Jackson Browne, Sara Watkins, Ben Kweller). It was a really fun experience and a project I’m really proud of because I felt like my intent and ideas were fully realized by everyone involved, which is really fulfilling and doesn’t always happen!

4) From that album comes the song, “If I Wanted Your Opinion,” and we’re happy to offer the world premiere for that song’s video. The song is both powerful and empowering. What motivated you and co-writer Mary Bragg to create the song, and how did the video come about?
I went to Mary with the first couple lines written. I heard the filmmaker Greta Gerwig say something about wanting to create work about women without the male gaze. It inspired me to keep contemplating how I’m influenced by the “male gaze.” Mary and I had multiple writing sessions trying to figure out what we wanted to say. We honestly had to have a few venting sessions, encouraged by some wine, about some of the overtly sexist experiences we’ve had. We wanted to make a point but we also wanted it to be fun and kitschy, almost like an homage to ’90s pop-country icons like Shania Twain (who I love).

For the video, I centered it around one of my students, 15-year-old Carlisle Wright. I’ve been working with her since she was 10 and she’s evolving into a really strong writer and performer. I wanted the message to be about strength and individuality and particularly to young girls to develop a kind of armor that protects them from listening too closely to outside opinions. I value constructive criticism but I think we all have to be careful about which voices we let inside our heads. I, for one, have struggled with developing a strong sense of self that isn’t swayed or influenced by others’ acceptance, approval, etc., so it’s as much a motivating and encouraging song for myself as it is for others. 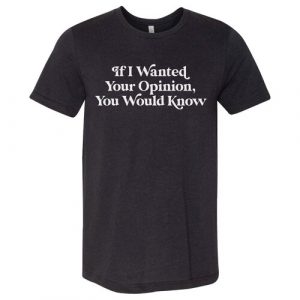 5) And finally, you have a social media campaign to go along with the song with the hashtag #ifiwantedyouropinion. What was the impetus to start that campaign, and how has it been going?
I love hearing people’s stories—and especially hearing what others have overcome or what challenges they have had in their confidence or self-esteem only encourages me. So I thought, maybe others will benefit from hearing stories as well. So I’ve been asking people to video themselves answering the question “When was a time when you had to courageously be yourself, shut out the noise of others’ opinions, and listen to your own voice?” It’s been going really well so far! I was sharing them every week, but I’m slowing down a bit for the holidays. I’ll definitely get back going in the new year. They’re posted on my socials but all live at www.ifiwantedyouropinion.com as well. There’s also an invitation on the website for anyone to share their stories. They can be submitted via email and be written or in video form.

Thanks for the interview, and now we hope everyone enjoys this world premiere video of Michaela Anne’s song “If I Wanted Your Opinion.” Catch the DittyTV Debut of the song on Wednesday night, Dec. 16, on The Curve at 11/10c.