We have a real treat for you with The Imaginaries. First, DittyTV is excited to offer the world premiere video for their song “Blue Sky” below and on the network. To catch the DittyTV Debut of the video, tune in to The Curve Wednesday night, March 24, at 11/10c. And next, this duo of Shane Henry and Maggie McClure provided us with a fantastic exclusive performance video, which you can see below. And finally, we hope you get to know this duo a bit better with the following 5 Questions segment.

1) We’ve known about y’all at DittyTV for quite a while, so we know this album has been a long time coming. So first, what does it feel like to finally be releasing this debut album (March 26) into the world?
Shane – It feels amazing and honestly surreal to finally be releasing The Imaginaries’ self-titled debut album into the world. We could have never imagined the setbacks that we have encountered leading up to this release, and after the last year and a half this project means even more to us than ever. We are so proud of these songs and recordings. Right now feels like a good time to us to be releasing new music. We’re all adjusting to what our “new normal” is and our hope is that this album can help bring some healing and inspiration to whoever hears it.

2) And then let’s backtrack a bit. Y’all are both from Oklahoma, but how did you connect with each other to form The Imaginaries?
Maggie – We are both from Oklahoma. I am from Norman and Shane is from Verden. We met through music when I opened a show for Shane in 2003 in Norman. I don’t think we would have ever met if it weren’t for music, actually. We had our separate solo careers, became friends, started dating years later (and are now married), then started backing each other up at shows. Between 2009-2012 we were playing hundreds of college shows every year and accompanying each other (so I would play keys and sing background on Shane’s shows and he would play guitar and sing background on mine). We had been writing together for years but our first recorded collaboration was a holiday project. We always knew we would do something together at some point, but we never knew it would unfold like it did. When we were selected to be a part of the OneMic Series put on by John Cuniberti at the legendary Muscle Shoals Sound Studio in April 2019, that is what jump started the new band (and also gave us a deadline to come up with a band name). We had such a fantastic experience with the OneMic Series that we decided to get our songs together and go back to record The Imaginaries debut album. 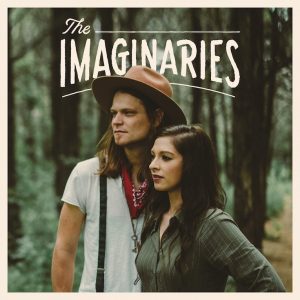 3) So let’s talk about that. Y’all recorded this album at Muscle Shoals Sound Studio with a lot of musicians well-known in the Shoals. What can you tell us about that experience?
Shane – We recorded the album at Portside Sound in Cypress Moon Studios in Sheffield, Ala. When we were in town doing the OneMic Series we connected with local area musicians who we wanted to work with again on the album. Kelvin Holly helped us decide where to record, played guitar on the album, and also acted as a “band leader” of sorts and helped with pre-production ideas. We worked on pre-production for a few days before we started tracking. Shonna Tucker and N.C. Thurman also joined us in the studio when it was time to start tracking. We flew in our longtime friend and drummer Rob Humphreys from Los Angeles, and spent I believe four days recording all the songs. It was always important to us to record this album organically all together (with minimal overdubs) like albums used to be made. And we got to do just that and it was everything we had hoped it would be. The recording experience went very smoothly as we were working with pros who understood exactly what the songs needed with little direction. Decisions were made on the fly and there were a lot of spontaneous moments that helped shape the record. It was truly a magical experience and we look forward to returning again soon.

Speaking of actually playing together and performing, let’s take a break right here to let everyone see and hear you in action. DittyTV is pleased to offer this exclusive performance video of The Imaginaries!

4) From the time you started the album until its release, the music world has changed a bit, if you haven’t noticed. So what are your plans to promote this project going forward?
Maggie – The world has definitely changed since we started working on the album and it’s had a huge impact on our release and plans. We are excited to have an excellent team on board helping us seize every opportunity we can with this album release. We have an amazing publicist, marketing consultant, radio promoter, and distributor on board. We’re excited to do so many livestream shows with venues, film festivals, publications, and collaborations just like this leading up to the release and after! We’re making the most of the current situation and constantly keeping up with what’s going on and coming up with new ideas on how to get the music out there and make an impact. We hope to be playing outdoor shows starting this summer and would love to be back on the road touring this fall depending on if it’s safe to do so and what’s going on in the world at that time. Touring is such a big part of what we do and we really look forward to playing out again. We are submitting our music videos to film festivals and many are happening online now so that is showcasing our music to new audiences. One thing’s for sure: we are not sitting still, but doing all we can to get this music heard by as many people as possible.

5) I wanted to end by asking about a particular song. The whole album is great, but I guess I’ve been in a sentimental mood of late, so I’ve really come to love “Blue Sky.” I know that, at its essence, it relates to your move from Oklahoma to Los Angeles, but what else can you tell us about that song?
Maggie – Thanks for the kind words. We wrote “Blue Sky” with our talented friend Shane Alexander. Yes, it is about our journey from Oklahoma to Los Angeles. It’s also about the fear and excitement we felt as we drove out west. It represents our leap of faith in launching The Imaginaries, our faith in each other as a couple, and as musicians pursuing our careers in general. It’s about knowing that we will arrive at the destination, wherever it may be at the time. It reiterates the fact that as long as we have each other, everything will ultimately be just fine.

Thanks so much for chatting with us, and now we’re thrilled to present the world premiere of “Blue Sky” here! Catch the DittyTV Debut Wednesday night, March 24, on The Curve at 11/10c.