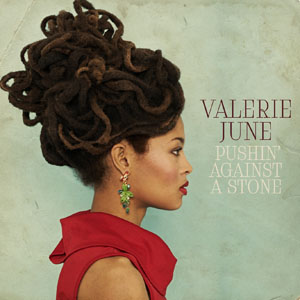 @dittytv @TheValerieJune | Memphis and DittyTV loves Valerie June! Do yourself a favor and check her out, amazing new album out, we hope to get her on the show next time she’s in town.

“I feel like my whole life I’ve always had a stone I’ve been pushing,” she says, explaining the record’s title. “Some days it’s a good thing to have, like a best friend, and sometimes it’s your worst enemy. In the case of this record, I had so many friends helping me move the stone.”

It was about that time when famed producer Kevin Augunas stepped into June’s life. Taken with her music on first listen, he immediately flew to Tennessee to introduce himself. Augunas connected her with The Black Keys’ Dan Auerbach, who, unbeknownst to June, was completing work on his Easy Eye Studio in Nashville at the time.

“The intention was to meet him and write some songs,” says June. “Songwriting can be like going on a blind date, you don’t know what’s going to happen, but when we got in the room together, we were on the same page. We really got each other. After two sessions, he said, ‘My studio’s about to be finished if you want to record some of these and your own.’ The music always tells me what to do, and I knew I needed to capture those songs there and then. I had to read the signs.”

The result is a stunning studio debut from an artist who’s journeyed a long and dusty road, pushing a mighty stone all the way. It’s been a long night, but dawn is just breaking for Valerie June.