The HawtThorns’ sophomore LP, Tarot Cards & Shooting Stars, will be released on February 25th via Mule Kick Records. We caught up with the now Nashville-based duo to discuss the journey they took to complete the new album and more while premiering a stylish and laid-back new video titled “All the Right Reasons.” Check it out!

5 Questions with The HawtThorns by Sam Shansky

1) Your sophomore LP, Tarot Cards & Shooting Stars, will be released on February 25th via Mule Kick Records. Could you walk us through the journey you took to complete this album and tell us who all was involved? 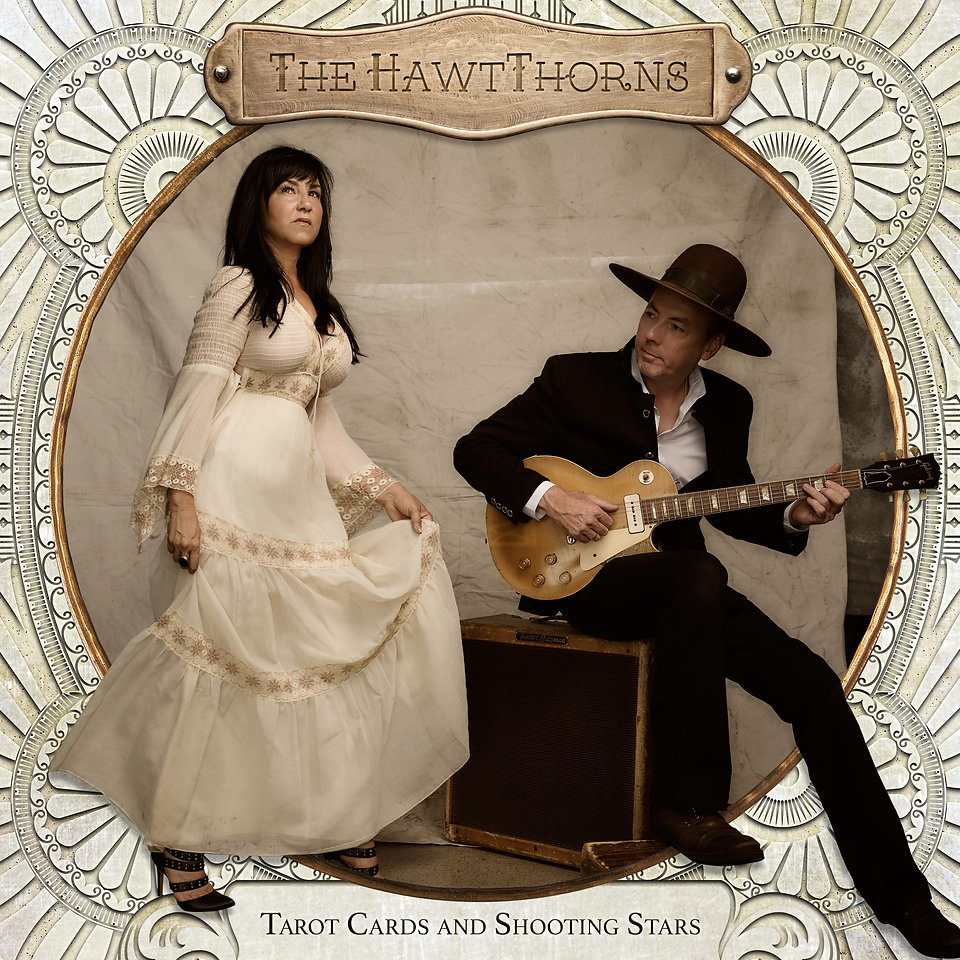 Yes! As we have all gone through a lot the last couple of years, we have our own story. We had just solidified the band and released our first record in August of 2019. Only 7 months into it, and after putting all our resources, blood, sweat and tears into the project, we got shut down. We had lived in LA together but we had a little place in East Nashville and when the world stopped, we headed east to wait out the storm.

Being here in this very musical community with a much slower pace helped us both recharge and get our heads back in the game. We took several trips to LA in 2020 and 21, we were staying with our production partner Steve Berns who asked, “So when are we making another record?” At that point, we hadn’t planned, but we had been writing often and had iPhones full of voice memos with potential tracks. That very day we had our good friend and drummer Matt Lucich come over and track 10 songs in 2 days.

A few days later, Eliot Lorango came over and played all the bass parts – we added the rest over the next few weeks with Sasha Smith adding keys, Kaitlin Wolfberg playing all the beautiful strings and even singing some backing vocals. We took the tracks home and Johnny worked on the guitars in our Nashville studio since we had all the time in the world. With this record, we were able to take the time needed to mold the sound and make it special. Mark Niemiec, a producer/mixer here in Nashville agreed to try his hand at some mixes and it was exactly the right fit. We delivered the mixes to Hans DeKline in LA who did a fantastic mastering job that was that.

Bonus: Regarding the album’s title, are you tarot and astrology devotees, and if so, why does it appeal to you?

We are not occult fanatics but we both know that there are forces at work that we can’t see. It’s impossible for us to ignore the idea that there is mystical knowledge and power affecting all we do. It appealed to us for a title particularly for this record because there has been so much that we can’t control and we could definitely use a little peek into the unknown.

2) Could you highlight one or two songs from the record that bear the most significance to you, and please explain why?

It’s tough to choose because we feel like the songs on this album all kind of balance each other out and they all have their own unique strength and meaning. If we were going to choose two, we would say that “One Human At A Time” has a special importance. The lyric came to us on a long drive from Nashville to LA after being barraged with political news on the radio and hearing the spiteful, unproductive arguments. It’s very easy to take the low road and go after the red meat of hate and name-calling – but when you take the time to actually listen and try to learn who people are and what motivates them, that is when communication happens. I (KP) began to think about how much we don’t know about one another vs. how much we assume. Our song begins with my own personal story and moves on to talk about others’ struggles. I don’t want to tell anyone what to think or how to feel, but I would love to be able to influence someone to be kind and listen to another human being.

Another song we both love is “Baby It’s A Gift”. I (KP) started writing this a couple of years ago with Shane Alexander in LA but we didn’t get too far. Once we moved to this humble little house in Nashville and pointed life in a new direction, the song was easy to finish with the help of a new songwriting friend, Emily Bell. It’s really a song about a couple who realizes that all the hard things you have to go through are part of the reward. The stuff we struggle through can make us better. It’s also the only track on the record that Johnny plays pedal steel on!

Mule Kick Records was formed by KP Hawthorn and Adrienne Isom of NOCONA. It came about originally as a production company for a documentary film about The Palomino Club of North Hollywood and California roots music. We quickly realized we would need a record label for the soundtrack of the film, and in doing so we couldn’t ignore the fact that there is a lot of music out there made by some special artists we love. It was a no-brainer to get a distribution deal going and set up releases with the help of some great PR companies and radio promotion. We are small but mighty and everyone loves their job here. Besides The HawtThorns’ new record this year we also have releases by Andrew Leahey & the Homestead, Suzie Brown, Desert Hollow and more coming in 22’.

Bonus: What’s something newly established in Nashville that you’re excited about right now?

There’s a lot to be excited about in Nashville! The backyard music jams on our deck are pretty sweet, the ability to be at any one of 10 hip venues on the east side in a few minutes is incredible! The former owner of a venue called The Family Wash just opened a crazy cool venue with his partners up the street from our house called The East Side Bowl – christened on its opening week by a benefit show with The Mavericks. I think we are in good shape here for some great hangs and fantastic nights of music.

4) Let’s dig into your new video single, “All the Right Reasons.” Who were your collaborators, where did you film, what was that experience like, and what kind of guitar is that Johnny’s seen playing?

The song was written by KP Hawthorn and Debbie Hennessey. We partnered up with a company called Stereophonic Films, co-owned by Mark Niemiec who mixed our record. They also recorded 4 live, in studio videos for us and they are all top notch. We were going for a video that featured just two of us that could help people get to know us as a duo. In the past, we have done some other cool videos, but we wanted to take it to the next level production-wise, keeping the concept simple.

We already knew that the guys at Stereophonic were capable, led by director Nathan Meckel. We spent the afternoon in Dee’s Country Cocktail Lounge in Madison, TN, and filmed 3 main shots with some additional footage. We loved the concept of “sliding” from scene to scene, each of us trading off the same part (bartender, pool shooter, on stage musician) while the story of a past relationship is being told.

One of the interesting things we did for the shoot was to paint sunglasses with green paint so they acted as “green screens” for the fireworks and disco ball shots. All of us were real happy with the final edit! That beautiful silver sparkle guitar is an Xotic XTC (telecaster style)- made in Van Nuys, CA custom made for Johnny.

5) As for the song, what inspired it, and what’s the key takeaway?

It was honestly just one of those songs that had a cool hook right from the beginning with the recurring line at the end of the verses and chorus. That got written first, we were actually in Austin TX during SXSW when the idea first hit and we recorded a verse and chorus onto our iPhones. Our friend, LA songwriter Debbie Hennessey (winner of New Music Weekly AC40 Female Artist of the Year) got together with KP for a zoom writing session and we picked the tune back up after it sat for a year and a half.

The girls turned it into a sassy therapy session; bringing up past indiscretions and bad choices that led to even worse relationships and had a good laugh. The takeaway for this one is looking back at the innocence and naiveté of youthful ideas that look totally different in the rear view – realizing that sometimes when we feel like we may have been abandoned, we actually dodged a bullet.