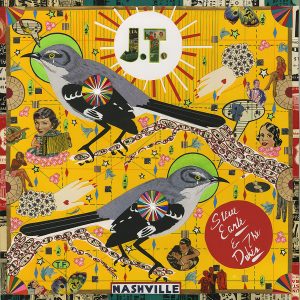 On the new album, J.T., Steve Earle & The Dukes pay tribute to Earle’s late son, Justin Townes Earle (J.T.), who passed away on Aug. 20, 2020, in Nashville. The album is being released digitally on what would have been Justin’s 39th birthday, Jan. 4, 2021, CD and vinyl formats will release March 19.

The first track that was available for download is “Harlem River Blues.” The poignant song is one of Justin’s best-known compositions and took Song of the Year honors at the 2011 Americana Music Honors & Awards ceremony following Justin’s win in the Emerging Artist of the Year category in 2009.

All of the artist advances and royalties from J.T. will be donated to a trust for Etta St. James Earle, the 3-year-old daughter of Justin and Jenn Earle. While somber in parts, the album is ultimately a rousing celebration of a life lived with passion and purpose.

Take a listen to the album’s first single, “Harlem River Blues,” below.