You are here: Home / News / Southern Avenue Finally Back in Memphis 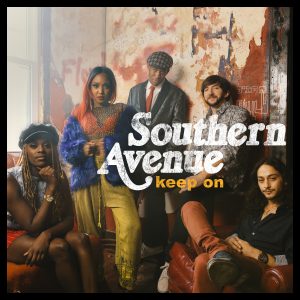 “When we’re touring,” says guitarist Ori Naftaly of the band Southern Avenue, “we have two things on our mind. When is the last time we played Memphis, and when is the next time we play Memphis.”

The answers: The group played Memphis in May just before it released its new album, Keep On, last May. That means the band’s “album release party” in Memphis has been delayed six months. That changes on Nov. 23, however, as the group comes home to play a 7:30 p.m. show at the Halloran Centre at the Orpheum.

“It will be great to be back,” says Naftaly, who formed the group along with the Jackson sisters—Tieirnii and Tikyra—a few years ago. “At one time we were playing in Memphis four times a week. We really miss that so we’re looking forward to finally playing this album for the fans who have been with us from the beginning. There are the Blues Society folks and the people from Midtown and the people from the suburbs. We’re looking forward to reflecting a bit on ourselves and then giving the best versions of ourselves on Nov. 23rd.”

In addition to Naftaly, Tierinii (vocals), and Tikyra (drums, vocals), keyboardist Jeremy Powell has been with the band almost since the beginning. The group’s newest member, coming in after Gage Markey played bass on the album, is bassist Evan Sarver.

Signed to Concord Records, the band recorded Keep On at legendary Sam Phillips Recording in Memphis. Johnny Black produced the album. “It was fun,” Naftaly says. “It’s like playing in a museum. It was very different from recording our first album in which we were secluded. At Sam Phillips, it’s right in downtown Memphis and people are in and out and it’s a whole different feel but it was a great experience and we had some great Memphis musicians to play on the record.”

“I had not heard of the term ‘sophomore slump,’” Naftaly says, “so we really weren’t concerned about that with this album. But in a lot of ways, this really felt like our first album as we grew a lot as a band after our first album. I guess the challenge now is to not have that slump on the next album.”

As for a next album, Naftaly says the band members are writing all the time so the songs will be ready when it’s time to record. But for now, the band is still touring hard and promoting Keep On. “We’re out with the Tedeschi Trucks Band now,” Naftaly says. “We’ll be touring with Galactic in February and then going to Europe in March.”

To get a feel for this great band’s live electricity, watch the official video for “Keep On” here: