“Music has always been the art form I’ve pursued while visual art and film have been in the constant periphery,” says New Orleans-based artist Ric Robertson, whose Free Dirt Records release Carolina Child captivates more with each listen. Aside from being an adept multi-instrumentalist and acclaimed singer-songwriter, Robertson is an excellent animator whose music video work has evolved over the last year or so thanks to the extra time brought on by COVID-19 shutdowns and lack of touring.

Today, we dig into Ric’s work in that visual realm, while also delivering the World Premiere of his new animation-less video, “Getting Over Our Love,” which features performance from modern dancer Shayla Taylor. Carolina Child was produced by Dan Molad of Lucius, and features Jess Wolfe and Holly Laessig from Lucius plus Robertson’s musical pals including Dori Freeman, Oliver Wood (The Wood Brothers), and Logan Ledger.

1) When you’re not writing songs or playing music, you often spend time working with claymation and building puppets. You’ve put your filmmaking skills to use in several of your music videos, including “Anna Rose,” “Strange World,” and others. Have you always been a visual artist, and what films, or filmmakers, have most inspired your efforts?

Music has always been the art form I’ve pursued while visual art and film have been in the constant periphery. Besides a music video for “The Fool” from my first record, I hadn’t really taken the dive into film and especially not animation until last year. I had recorded the songs for the EP Strange World and thought it would be cool to have a 10 minute animation accompany the music.

COVID and early shutdowns had just hit and like most musicians, I was out of work with way too much time on my hands, so I started figuring out stop motion animation using paper with a roommate of mine. Three months later the movie was done and I had become infatuated with the process. So I made another mixed media stop motion for “Thinkin’ About You” and collaborated with a wonderful borosilicate glass artist Clinton Roman on an animation for “Anna Rose”.

I always loved animation, and growing up in the 90’s it was everywhere, all that Disney and Pixar stuff in the movie theaters, plus Nickelodeon and Cartoon Network. I especially liked the kids’ shows back then that had a sort of psychedelic lawlessness to them too, stuff like Rocko’s Modern Life and Ren and Stimpy, and as I got transitioned to middle school I got way into The Simpsons and South Park. As far as filmmakers, I ate up all the Quentin Tarintino and Wes Anderson stuff in high school, and all the quirky indie movies at the time like I Heart Huckabees and Eternal Sunshine of The Spotless Mind. 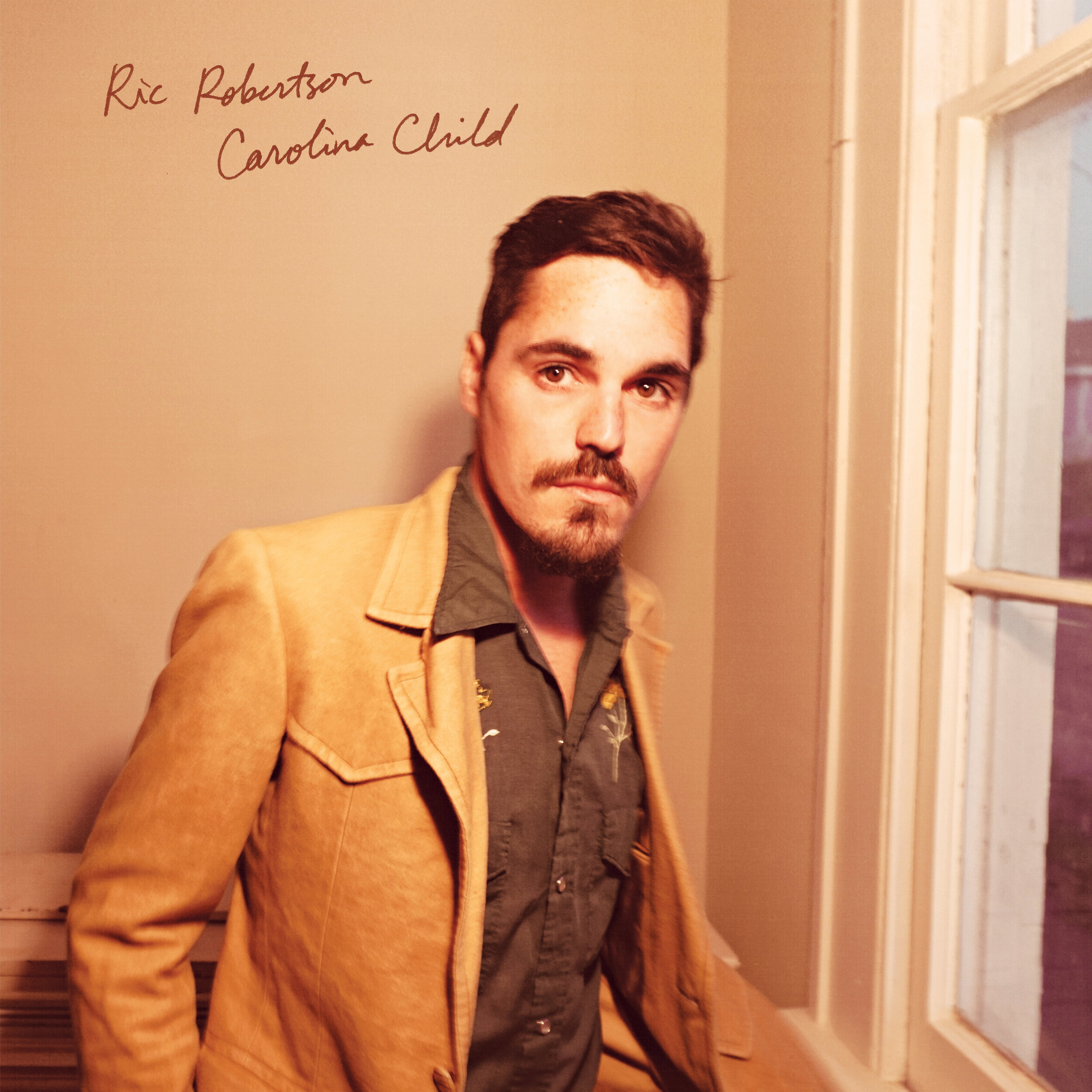 2) The title of your album, Carolina Child, is said to have been inspired by an off-hand comment from Esther Rose after she saw the look of delight on your face as your tour van made its way through the Blue Ridge Mountains. You’re originally from North Carolina, but New Orleans is where you hang your hat. How do you think those two musically rich places affect your songwriting most?

I actually grew up outside of Philly and in Dallas before getting to North Carolina when I was 8, which eventually exposed me to bluegrass and old time string band music. This was in the early 2000s when there was a mini sort of revival of that stuff with the movie O Brother, Where Art Thou? and artists like Alison Krauss and Nickel Creek on the rise. I thought that music was pretty lame. I was more into whatever pop music was happening on MTV at the time… everything from Green Day to Snoop Dogg to Ben Folds to R. Kelly.

But when I was thirteen, one of my neighborhood buddies was a banjo player and we got into it going to the local jam with his dad. My parents came to folk music through the Grateful Dead parking lot and had been exposed to it going to festivals in the 70s where they saw John Prine, Old and In The Way, David Bromberg, and John Hartford. My dad had the video of The Band’s The Last Waltz and I was always the most excited about Dr. John’s performance on there.

I went to college for music in Boston and moved to New York City after some years and then eventually down to New Orleans. I love to play and that’s the only way I’ve ever made a living, so in North Carolina, I’ve played Carolina music and in New Orleans, I’ve played Louisiana music. I suppose those places come out in the songs, but I don’t really think about it that way. I’ve always felt more like a visitor than a citizen of this planet, let alone any particular city.

3) How would you describe Dan Molad’s style of producing (and approach to music and art in general), and why do you think it’s compatible with your own approach?

Dan is relentless in following ideas down the rabbit hole and somehow remains unattached to how he wants something to be. He can be heavily opinionated but without an ego, which to me makes him a producer I feel a lot of trust in working with. His ear for sonics and how certain sounds convey feeling is unlike anyone else I’ve ever known. We have been nurtured by and brought up in quite different musical worlds, and the places where they do and don’t overlap tend to create some interesting results that neither of us could plan for. He’s also a wonderfully soulful multi-instrumentalist and singer who is so fun to play with, and I love when we get to lean into connecting on that level!

4) Your song “Sycamore Hill” experiments with a variety of sounds that work together beautifully. From bird songs to fiddle trills and low-end synth, how did this tune materialize, and what are some of your favorite memories of the sessions for this track?

We set up to record “Sycamore Hill” at the home studio of Kai Welch. Kai has a Swedish sampling keyboard called the OP-1 which he used to sample my good buddy Logan Ledger singing the hook lines- “sycamore, sycamore hill.” Then Logan left and we jammed on the song with Dan Molad on drums, Nate Leath on Fiddle, Sam Fribush playing a Moog bass synthesizer, and Kai playing that sample of Logan singing. That’s where you get all those high pitched “sycamores” that sound like little woodland trolls. Dan added the bird songs to the beginning and end and layered my scratch vocal with a couple other quick vocals I dubbed. Other than that, the track is totally live!

5) Today, we’re offering the World Premiere of your new video, “Getting Over Our Love,” which features your bandmates from Lucius. Would you please share as much as you’re willing to about both the song and the video?

I recorded “Getting Over Our Love” In LA while Dan and had begun other mixing tracks for the Carolina Child album. I had tried the song in a number of different ways before landing on the 12/8 feel, playing a weird little four string tenor guitar that Dan had laying around the studio. He played drums and we did it live just the two of us. Jess and Holly from Lucius came through the next day and put down those beautiful harmonies, with the other member of Lucius, Pete Lalish, playing a twelve string guitar using mallets. Sam Fribush finished off the track with some duct-taped piano and synthesizer on the interlude.

My film collaborator Cameron Scoggins, with whom I made the videos for “Sycamore Hill” and “Carolina Child”, and I had the idea to use a modern dancer for the “Getting Over” video and were very fortunate when someone recommended Shayla Taylor to us. She is originally from Baton Rouge, LA but has been finishing school at UNCG in Greensboro, NC, which is where Cameron and I grew up. She came up with some beautiful choreographed sequences and let me in some movement improvisation, with Cameron shooting all the footage. We spent just two days filming and got lucky with some locations, including the treehouse featured in the back half of the video.

Bonus: Could you share some about your creation process when you’re at home and tell us about your great-grandmother Sadie’s old Spinet piano?

Sadie was my Mom’s Mom’s Mom, and she played that old Baldwin piano for my grandmother when she was a girl. My brother and I both learned to play music on it growing up. My creation process is mostly revolved around trying to find ways to shut off my thinking mind and let the subconscious work. This can happen any way and is not something I seem to have much control over. I just stay involved on some level with the songs always. I want them to show up. But they don’t like to be forced to. It’s a real paradox, mostly frustrating, and sometimes magic.