We caught up with California native and Nashville-based artist Stacy Antonel in 5 Questions to discuss her new album Always the Outsider and to learn more about the making of the video for the album’s title track. Directed by Oceanna Colgan and shot at Dee’s Country Cocktail Lounge in Madison, TN, the song itself was inspired by a lonely night at Dee’s, and the video speaks to this experience by having every character played by the Antonel.

“Having this particular song out in the world has taught me that I’m not unique in feeling like an outsider,” Antonel tells us. “Sounds obvious, but it continually blows me away how much it resonates with people. It’s made me feel less alone, and like I shouldn’t view my feelings of isolation as a personal failure. Everyone’s internal experiences differ from what they’re projecting to the outside world.”

1) Mind sharing about the time and work put into your debut record? How did you write and record Always the Outsider, and with whom did you collaborate? 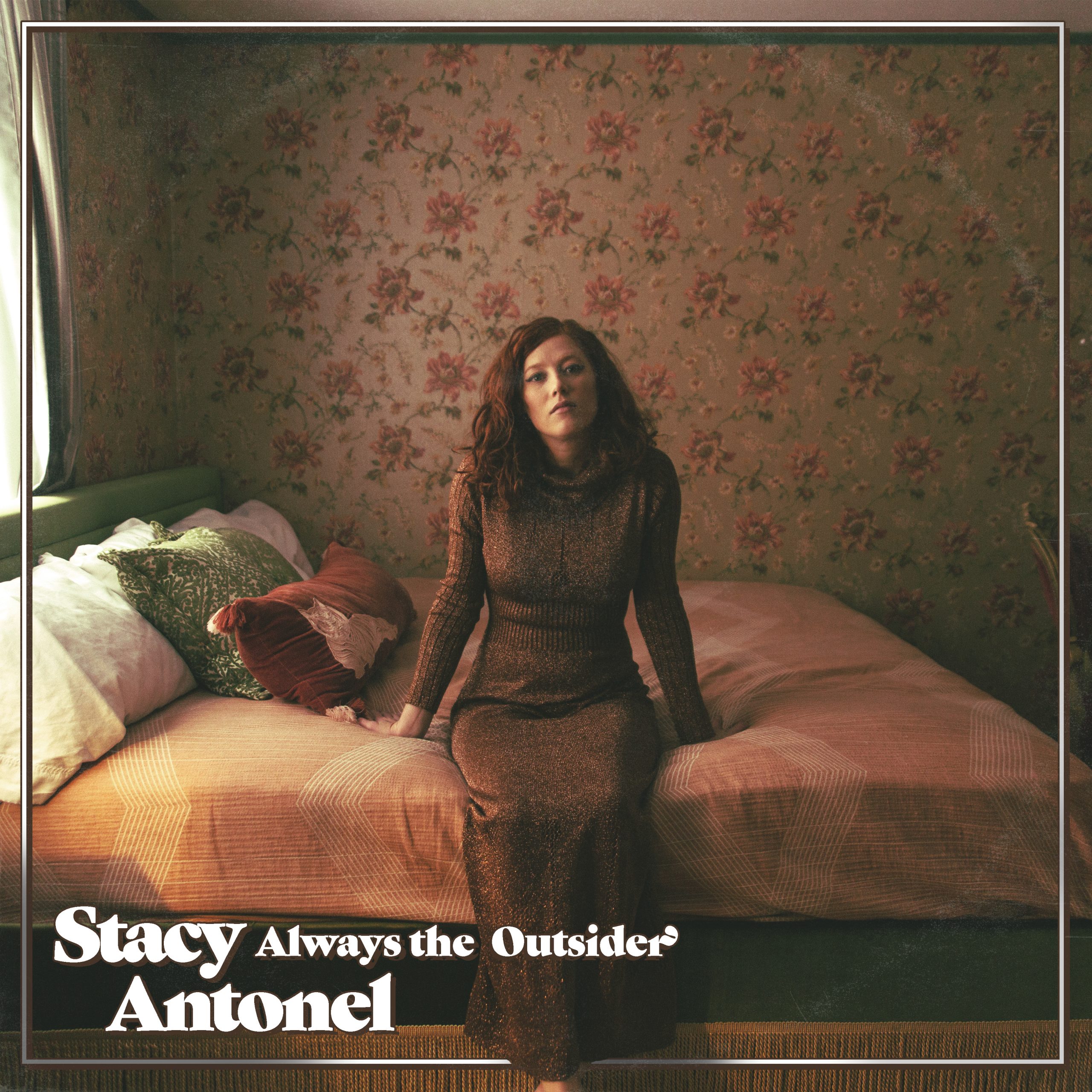 I wrote about half of the album during the early part of the pandemic, and those songs comprise the emotional heart of the album. They don’t have anything to do with the pandemic per se, but I happened to be going through a really intense romantic relationship during that time, and I had plenty of time to reflect and write. I learned a lot about myself from that relationship, and because I spent the bulk of 2020 in California, I was also able to process the previous two years in Nashville with some distance.

I almost exclusively write alone, so I didn’t collaborate with anyone on that end, but bringing the songs to life was a team effort with the band. We recorded the album in May 2021 at Singing Serpent Studios in San Diego, with Ben Moore producing and engineering. I brought my Nashville guitarist Paul Sgroi, but Ben put together a band of local players, the most well-known of whom is Doug Pettibone on pedal steel. Most of the songs had never been played live before, and we recorded 12 songs in three days, so each song had to unfold pretty quickly. It was exciting and also totally nerve-wracking.

Bonus: Design, dress, location – talk to us about the album’s cover art. I read that Fanny’s House of Music was involved. What can you tell us, and what do you love most about Fanny’s?

The album cover was shot by Lindsey Patkos at The Paper House in Nashville, and I’m wearing a dress that I bought at Fanny’s. I’ve bought several amazing dresses at Fanny’s over the years and longed for many of their guitars. I’m very much a brick and mortar person, so I love having an actual store I can go to, and the staff are awesome.

Learn about Fanny’s House of Music in our recent Americana Connection episode hosted by Cyrena Wages.

2) The first song from the record I caught was “Planetary Heartache,” heard paired with the wistful visuals of the Oceanna Colgan-directed music video listed below. Could you share some about the making of that video and how you first connected with Colgan and explain how the video complements the tone of the song?

My friend Teri (aka Brontë Fall) had used Oceanna for one of her music videos and highly recommended her. She’s just amazing at converting the spirit of a song into a really compelling visual idea, and she’s also super supportive and easy to work with. In my head, “Planetary Heartache” takes place in the ’70s, so I really wanted that aesthetic, and I wanted an alien element but not a heavy-handed one. The video really enhances the heartbreak of the song, and Oceanna’s idea to have me singing from the cover of vintage sci-fi novels incorporates the outer space theme without turning it into a gimmick.

I was really nervous going into the shoot because I’m not an actress, but thankfully I was able to tap into the energy of the relationship that I wrote the song about. This song has always been one that I really FEEL when I’m singing it. Nathan Kalish made all the happy parts easy to film, and all my laughter is genuine.

3) You recently shared that “Heartbroken Tomorrow” is the oldest song on the record and that it went through several incarnations before becoming the version we hear today. Would you mind sharing some details about the tune’s origin and also explaining why allowing a song to evolve can be beneficial?

It was one of the first songs I ever tried to write, around 2015. I tried several chord progressions to no avail and ended up just giving up on it. Early last year, I randomly started singing the lyrics over a much faster tempo and some really basic chords, and all of a sudden it started to come together.

For me, it’s really all about allowing the subconscious to take over and work beneath the surface. The thinking mind has its limitations in creativity, and when I can feel myself starting to drown in a new song, I know I need to step away and let my subconscious do its thing. When I was first writing this song, I never would have made the decision to put really devastated lyrics over uptempo, cheerful music, but that juxtaposition is part of what makes it cool. Coming back to a song days, months, years later allows for a shift in perspective that’s difficult to attain in the initial stages of writing a song.

4) We have the pleasure of premiering your brand-new music video for the album’s title track, another piece of Oceanna video magic. What’s at the heart of this song, a question that could extend to the whole album, and what has writing and performing it taught you about yourself?

The heart of this song is about feeling alone and on the outside. It’s specifically referring to feeling like an outsider in Nashville after moving here alone with a big fire in my belly. I’m not the most outgoing person, and it takes a few years in a new place to really feel at home and build community, let alone advance your career in a city filled with people trying to do the same. It was painful sometimes, and this song speaks to that. As a whole, the album has a very cosmic, ungrounded, outsider vibe, thanks in part to several songs about aliens, past lives, and alternate dimensions.

Having this particular song out in the world has taught me that I’m not unique in feeling like an outsider. Sounds obvious, but it continually blows me away how much it resonates with people. It’s made me feel less alone, and like I shouldn’t view my feelings of isolation as a personal failure. Everyone’s internal experiences differ from what they’re projecting to the outside world.

5) California-born, Nashville-based – what’s the story there? Where did you spend your formative years, what music did you grow up on, and was Nashville always where you were heading? What drew you there, and what keeps you there?

I grew up in San Diego studying classical piano but mostly listening to pop, R&B, and ’90s-era grunge bands. I went to college for Anthropology and Women’s Studies, got a job in the California Bay Area, and didn’t start pursuing music until years later. I started singing professionally in 2011 and started my first country band (Ginger Cowgirl) in 2014, but even then, Nashville wasn’t the plan. Eventually, I got tired of singing covers in hotel lobbies, and I felt increasingly drawn to writing my own music. I was back living in San Diego at the time, which didn’t have much of an Americana/country scene, and on a personal level, I really needed a change. I’d been going to AmericanaFest for a few years, so I was familiar with the city and the scene, and I wanted to be part of it.

Moving to Nashville has done incredible things for my songwriting and for my growth as a person. To live here is to constantly be surrounded by inspiration, and there’s no other place like it in terms of the availability of amazing musicians and industry people. I can’t really imagine living anywhere else.

Bonus: You recently toured through California. How was that experience, traveling back to your home state?

I go back to San Diego pretty often, but it had been years since I’d been to the Bay Area, and I loved it. Berkeley and Oakland are where I became an adult, and those places feel like home to me in a way that no other place does. Unfortunately, California isn’t a great state for a touring musician right now, between the $7/gallon gas prices, the insane cost of Airbnbs and motels, and a higher covid consciousness than other states.