At the beginning of July, we featured Phöenix Lazare in The Ditty Dozen as one of ’12 Artists You Need to Know,’ and today, we’re doubling down on that stance. Lazare, a graduate of Berklee College of Music in Boston, MA, independently released her debut full-length album Gold on July 9th. We caught up with Lazare to hear her take on DIY recording, liner notes, what to do when uninspired, what constitutes a ‘hypnotic’ song, and more. Plus, she offers an exclusive performance of “This Too Shall Pass” from Gold that’s peaceful and perfect to start your week with.

1) You recorded your debut album Gold remotely, never stepping foot into a traditional recording studio. Could you share about your DIY approach, explaining why this method worked or did not work well for you, as well as how your family was involved? 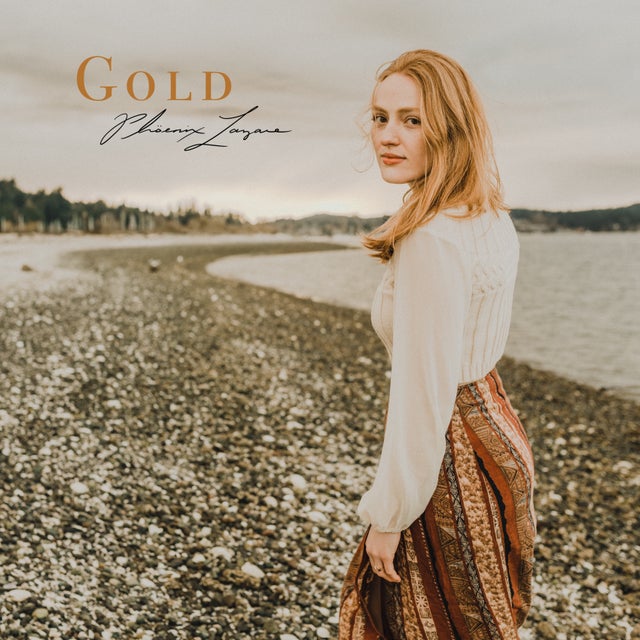 The absence of a studio throughout this project was in part because of convenience, and in part because I wanted the album to feel authentic and grounded. I craved the flexibility to be able to record and produce the songs without time or financial constraint. We began recording the album two years ago in British Columbia – we started with the drums, played by my brother Atom Lazare, on his home kit where he felt the most comfortable. The rest of the recording process followed me from Nashville to Toronto and back to BC, entirely using a home studio setup. As much as I love the atmosphere in a professional studio, this past year was a reminder to many independent artists that you don’t necessarily need to be in that environment to complete a quality project.

2) You’re from Salt Spring Island, British Columbia, but you attended school 3,000 miles away in Boston, MA, at Berklee College of Music. Could you identify a couple of different moments on Gold that were inspired by those two key locations?

Absolutely! The album’s fourth track, “What I’d Give,” has many Boston references in the lyrics:

Burning cigarettes on the fire escape / Morning sex, coffee break / … Frosted Boston fingers in the middle of the night

The song is reminiscent of carefree college years and the beginning of my relationship with my fiancé Justin. In addition, most of the album’s collaborators are Berklee College of Music alumni: mix engineer Louis Remenapp, drummer Atom Lazare, electric guitarist Trevor Larkin, bassist Adam Discipio, as well as myself and Justin.

The seventh track on the album “Against All Odds” also has a little bit of inspiration derived from my hometown of Salt Spring Island:

All I need is room to run / And space to catch the setting sun / If I have that, I can breathe

I wrote the song during a time when I felt extremely unstable in my life and I think these lyrics come from a place of familiarity – that familiarity being sunsets and hometown fields.

3) Could you detail what you do when you’re feeling uninspired as a songwriter — how do you shake things up?

The thing that most inspires me to write when I’m feeling in a rut is simply the act of listening to music. Whenever I need a good dose of writing motivation, I turn to my influences first. I can always take away some sort of inspiration from listening to songs I wish I had written – whether it’s a groove, a lyrical technique or even a sonic atmosphere.

Another way I sometimes shake things up when I’m feeling writer’s block is to open the many notes full of song seeds that I keep on my phone, choose an idea and challenge myself to write based on a title, lyric or voice memo.

4) As someone who loves vinyl records, do you also love liner notes, and do you remember the last liner notes that you read that really captured your attention, and why?

I do love liner notes, and that is part of the reason why I love vinyl records so much. As a songwriter who is driven by words, I love being able to follow along with the lyrics of a song. I also think it’s really important to give credit to all of the instrumentalists, engineers, songwriters and music industry executives that contribute to an album. I find these days it’s much harder on streaming platforms to find credits on a song or project.

The LP that sticks out in my mind in regards to liner notes that have captured my attention is Steely Dan’s Gaucho. I grew up listening to the band with my dad’s influence, but in college my friends and I would find ourselves most evenings gathering in one apartment to listen to vinyl records and talk about the music. The album we listened to the most was undoubtedly Gaucho, and I remember reading the liner notes, realizing just how much I loved music.

5) You shared a compelling TikTok video in which you were brought to tears while listening to the final masters of Gold for the first time — you said, “It’s hard to describe the feeling of writing, recording, and producing an album, and the catharsis that comes with releasing it.” For anyone working on their debut album and who might be struggling to complete it, what advice do you have?

I would encourage any artists that are sitting on recorded music to release it. As creative beings, we are our own worst enemy when it comes to the idea of perfection. There is a delicate balance between perfecting a song and knowing when to call it complete. The beauty about artists and bands releasing music throughout their careers is that as a listener, you’re able to see the music grow with time. As difficult and emotional it may be to let go of a song or a musical project, you owe it to yourself to share that art instead of keeping it bottled up.

Bonus: Share three songs from other artists that you would describe as “hypnotic.”