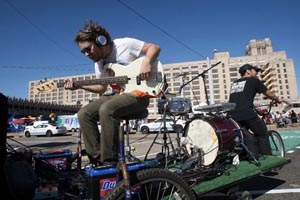 A multi-instrumentalist, singer/songwriter and producer, Paul has been a professional musician for 25 of his 40 years. With two solo releases under his belt (“Open Closed” & “Share It”, makeshift records 2007 and 2009 respectively), Paul is gearing up for a year of multiple releases in 2015.

In addition to a busy schedule of solo acoustic performances around Memphis (where he covers everything from Thelonious Monk to Pete Seeger to Doobie Brothers) and leading his electric rock band The Merry Mobile, Paul can currently be seen drumming with Hope Clayburn’s Soul Scrimmage, and as a sometimes drummer for Devil Train, Mighty Souls Brass Band, and Robert Ellis- or playing bass with John Nemeth.