“It feels like a really special time for music in Kentucky right now,” says Tiffany Williams, a Kentucky native whose eloquence as a songwriter is striking and worth exploring. Along with the World Premiere of a new single from Williams, we chat with her this week about her upcoming album, All Those Days of Drinking Dust, her time spent working at Tennessee School for the Deaf, the recent flooding in Eastern Kentucky, and more.

1) All Those Days of Drinking Dust – that’s the evocative title of your new album, a collection of songs inspired mainly by your lineage of Kentucky coal miners. What was it like when you were a kid growing up in that part of the country – what music stands out the most in your mind and how were people living out their relationship with music that fascinated or inspired you? 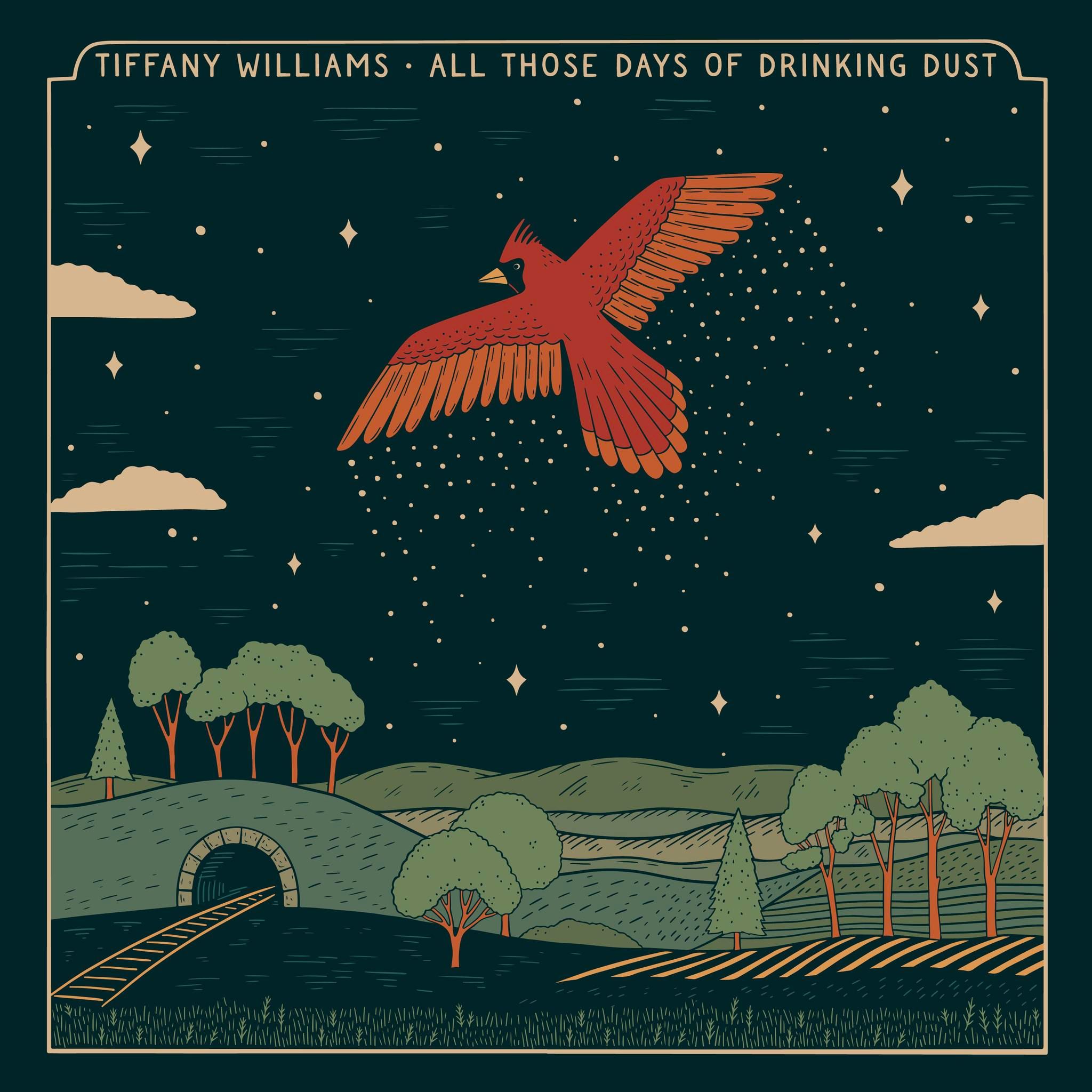 There was always music playing. With Dad, it was mostly 70’s rock, and with Mom, it was mostly contemporary country. My region was steeped in popular music, just like everywhere else. There was the odd bluegrass gathering in my periphery growing up, but the most significant regional music of my childhood was the music in church. We went to the Church of Christ, where instrumental music as part of worship was interpreted as biblically forbidden, so we were a cappella always. The voice was sanctified. And there was this emphasis on singing as a pure, visceral expression of love for divinity that left an imprint on me and influences me still.

In addition to voice-as-sacred-instrument, I was among people from my community, a remote part of Appalachia, whose families had been in the mountains for a couple hundred years just like mine had. Just like the Scotch-Irish remnants in Appalachian speech, the singing at the church held that influence, too. Not only does the brogue bleed into the melody, the intonations seem ancient. I’m not a musicologist, but I know others have studied the lineage of Appalachian singing, secular and religious. To get the feel for what it was like sitting in the pews in Letcher County, think “O Death,” as sung by Ralph Stanley, who grew up just over the hill from where I’m from.

2) Mind sharing about your time working at Tennessee School for the Deaf? What were some of your responsibilities, and did any of your experiences at the school impact your new album?

I love that you asked about TSD because it definitely had an effect on me as a human, a consumer of music, and a songwriter, even though I was only there about half a year in 2005. I supervised high school girls after school at the group residence, or “cottage” (it’s residential—west of Nashville, they flew home on weekends, and east of Nashville, they were driven home). I grew and learned so much during my time there.

Some of the other staff were deaf, so there were times I was the only hearing person in the cottage. I had a hard time dealing with it at first and went through what I called “hearer’s guilt.” For a month or better I didn’t listen to any music, even in the car—I honestly felt guilty that I had the ability to hear it. Then one night flipping through channels I happened to catch Ray LaMontagne on Austin City Limits, and it was a revelation. I think his performance and songs would’ve affected me regardless of my circumstance, but there was something about the timing of it that shoved the pendulum the other way, and I began listening to music with a hunger and a fervor that I hadn’t had felt in years, if ever. Instead of feeling guilty about hearing and experiencing music, I felt so incredibly fortunate and grateful. My music discovery in the months and years after that, primarily roots music, really informed my sensibilities about what makes a good song and what kind of singer and songwriter I wanted to be, even though at that time I didn’t know I would go on to write songs and sing them.

3) Who were some producers and players involved in making the album, where did you record, and what drew you there?

Duane Lundy of Lexington, Kentucky, produced the album. He’s phenomenal, and it feels fated the way it came together. With my first LP in mind, I was listening to other artists to try to find production that pulled at me, and what really did it was that of Joe Pug’s Windfall. So I figured out who produced it—Duane—and looked him up. Turns out he’s in Kentucky, and we have several mutual friends. It was kind of surprising we didn’t know each other already.

We recorded at Dune’s studio, The Lexington Recording Company, in Lexington. He had some top-notch players in mind—J. Tom Hnatow, Tripp Bratton, and Justin Craig. He had worked with Ben Sollee, who I knew of and loved, so we had him play on a track where it felt like a good fit. I called on the crazy talented Ellie Miller and Taylor Shuck, who were on my first EP for fiddle and banjo, respectively. And for the duet, I knew I wanted Silas House to sing with me since it was a song we had sung together before.

It was a wonderful experience, top to bottom, and I feel especially grateful to have had Duane at the helm. He’s brilliant, and I feel like he understood where I was coming from as an artist and a human and where I wanted to go. And he didn’t get too freaked out when I cried, as I am wont to do.

4) We’re proud to present the World Premiere of your new single, “Harder Heart.” You wrote about the inspiration behind this tune, saying: “I woke up one morning, thinking about an unhealthy love cycle I found myself in, and in wishing I could break it, I said out loud, ‘I wish I had a harder heart.'” Are you tenderhearted by nature, and has writing and recording this tune changed you in any way?

Thank you for premiering it! I really love the way it turned out—the production on it makes it one of my favorites on the album. I’m definitely a tenderhearted person. Always have been. Being sensitive is a quality I’ve had to learn to utilize for good, so that it’s not a liability but an asset, or a superpower even.

Writing this song allowed me to process my feelings around the situation, for sure, and recording it allowed me to revisit the emotion and the processing of it with a slightly more objective, more focused lens. I’m sure it changed me. I think all writing shapes us—every song is more water over the stone.

Bonus: Do you need to be in a certain mood to speak out loud to yourself, or is that something you often do?

Not at all. We talk all the time, me and I. Honestly, not that often. Some things will push their way out into the open. Otherwise, it’s just an internal dialogue. But, fun fact, sometimes I’ll talk “out loud” in sign language to myself. I’ve gotten caught in the hall at work once or twice.

5) Who are some need-to-know artists from Kentucky that you’re currently enjoying, and are you familiar with The Local Honeys? If you are, what’s your favorite song of theirs, and why?

There are so many! It feels like a really special time for music in Kentucky right now. I know you’ve featured several Kentuckians, so I’ll try to name some you might not be aware of: Anna Kline (Swift Silver), Jen Tackett, Chelsea Nolan, Bek Smallwood, Dave Shoemaker, Dalton Mills. Two Kentucky singer-songwriters I think you’ve featured before that I love are Eric Bolander and Abby Hamilton, both of whom have worked with Duane Lundy as well.

Definitely familiar with and a fan of The Local Honeys! Hearing them do “Hares on the Mountain” is part of what inspired my song “The Sea,” which also relies heavily on metaphor. I really love “Throw Me in the Thicket (When I Die)” and “Cigarette Trees.” And hearing them do “I’m S-A-V-E-D” live at a show we were on together was delightful.

Bonus: Considering those affected by the recent flooding in Eastern Kentucky, are there any organizations or relief funds you recommend to readers?

Yes, thank you so much for asking! So many communities in Southeastern Kentucky, including my own, took a devastating hit, and it will be a long recovery. Foundation for Appalachian Kentucky is a good place. And Governor Beshear has set up a Team Eastern Kentucky Flood Relief Fund.

NPR’s Mountain Stage! The set will be on August 28th and will air later this fall. Also, Bristol Rhythm & Roots! It’s a festival I’ve always loved, and this is my first time playing. I have two sets this year—Friday, September 9th at 7:30 pm on the Shanghai Stage and Saturday, September 10th at 12:30 pm at Theatre Bristol.