From Pharis & Jason Romero’s latest LP, Tell ‘Em You Were Gold, released in June 2022 via Smithsonian Folkways Recordings, comes the World Premiere of “Been All Around This World,” a live-performance video filmed during the actual session that you hear on the album.

Check out the video to see Pharis playing her 1939 Gibson J-35 guitar and Jason playing a banjo that he built called “Papillon.” “Banjos are the reason we met,” says Pharis, “the reason we bought a house, the reason we found this path together… Jason started the J. Romero Banjo Co in 2002 and is currently working on our 500th banjo (along with the 20th anniversary year of building).”

1) You released your most recent album, Tell ’Em You Were Gold, on June 17, 2022, via Smithsonian Folkways Recordings. Before we dig into the making of the record, could you share a bit about working with Folkways and what sort of creative bond you share? 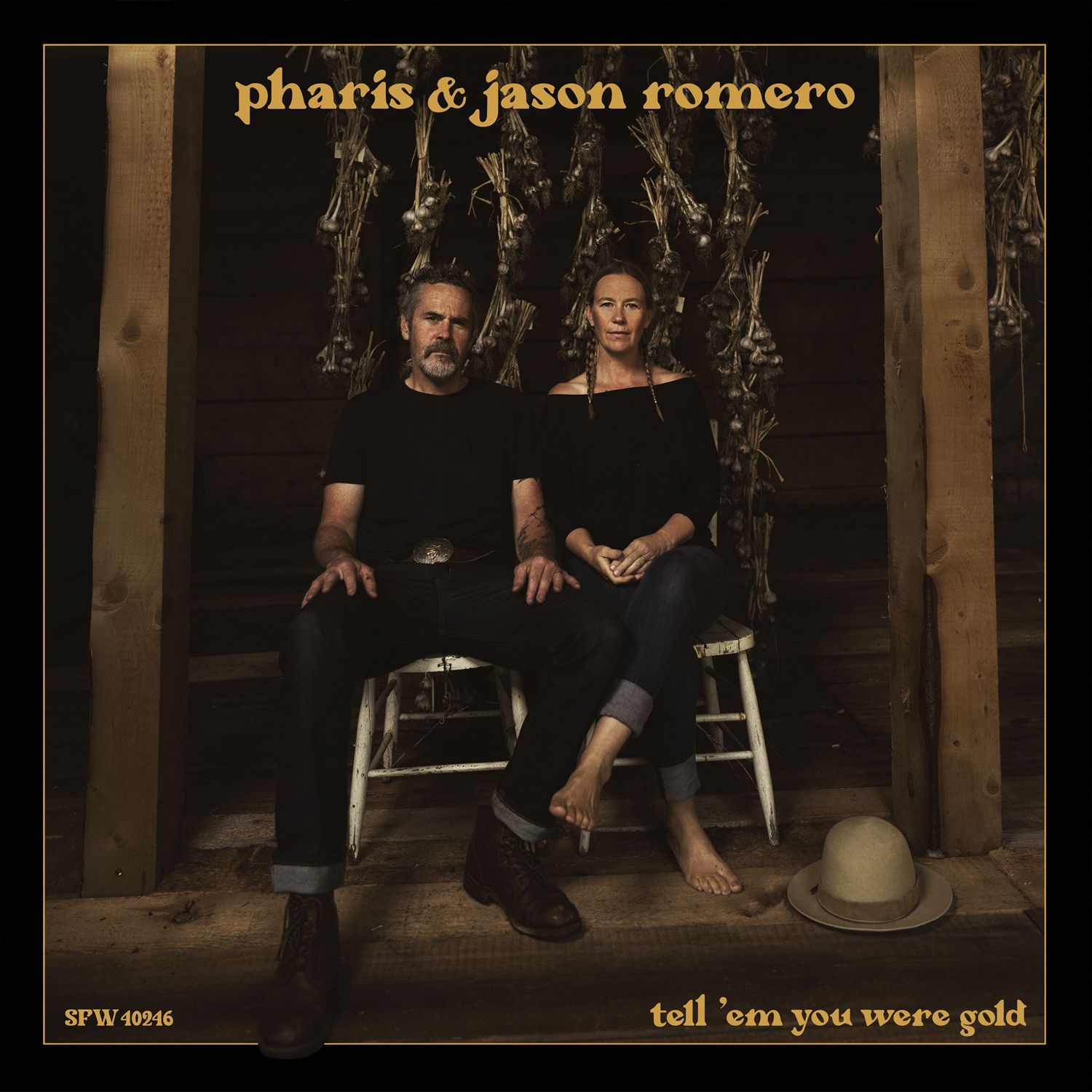 We met John Smith, the working AD at Folkways, at Folk Alliance in 2016 (Pharis was just pregnant with our first kid) and hit it off right away. We’ve worked with him over the years through Free Dirt Records, and when he moved to Folkways we chatted about working on a record together when the right project came along for us.

Since we started releasing records (our first duo record came out in 2011, after a few other project-based recordings), we knew something featuring all banjos would be in our future. Banjos are the reason we met, the reason we bought a house, the reason we found this path together; banjos have been very good to us. Jason started the J. Romero Banjo Co in 2002 and is currently working on our 500th banjo (along with the 20th anniversary year of building). He’s had a lot of years of creating his tonal and visual aesthetics, innovating what works for him as a player and as a builder.

In early 2021, we felt like we were ready to think about making another record, and John Smith and Folkways were on board with the idea of something featuring a bunch of different banjos that we’d made. Folkways has such a beautiful history of saturated liner notes and tactile artwork, and their desire to create something that visually conveyed the music and the beauty of the banjos felt so exciting for us. We’d both spent years listening to and looking at Folkways Records, and the whole immersive sensory experience always felt like how we both love to experience music. Folkways was amazing in their vision – knowing they wanted a mini-documentary on the video (again, expanding the sensory experience), lots of videos of the recording itself, beautiful photos, extensive liner notes, and an incredible team of creative energy helping to bring it all together.

Bonus: Could you name one or two Folkways releases that impressed or moved you and inspired you to want to work with them?

There’s a lot – Hazel and Alice, Strange Creek Singers, Don Stover, all the bluegrass and old-time collections. We have quite a few on vinyl. The music is always sublime and bringing you into a moment, and the printed paper on matte cardstock always feels excellent when you’re pulling the record and liner notes out.

Number one though is Mike Seeger’s Southern Banjo Sounds, which came out in 1998. Jason and I each loved this record before we met. Jason especially spent hours looking at the fold-out poster of all the banjos on the record, gazing at each banjo as Mike played it and visualizing what went into the banjo’s creation to make the sound Mike was bringing out into it.

2) You wrote and recorded Tell ‘Em You Were Gold in your barn, a run-down space you recently restored by hand. What were the most challenging aspects of that restoration process?

First step was replacing the roof, which was falling apart and was our deciding factor in whether or not to save the barn. Pharis fell through the rotten second story while we were replacing it (she got lucky, she just put a couple ribs out). We rebuilt the roof as it was originally, with the 2x10s lying flat from the sides to the peak. We have access to a lot of beautiful lumber around here through friends with small mills.

We leveled the barn as much as we could. It sits on the dirt on small fir timbers, and we dug out the corners and sides with the tractor, one at a time, jacked up each part with bottle jacks and then reinforced them with cement blocks and fence posts we had on hand. It’s still not level, but it’s better. We figured out how to block up all the drafts and make it cozy feeling using a lot of patience and small fillers. The main body is 2×12 spruce and fir timbers milled on the property in the ‘60s, framed up and then insulated with sawdust which has settled a lot over the years.

And replacing all the old, rotten boards – the floor, the base of the walls, the reinforcements going from the walls to the roof – from years of water damage from the leaking roof. We pulled down the original second floor and reused most of the boards to replace the damaged ones. It was a couple year project, with most of the work done the summer before we recorded.

Bonus: Were you listening to a lot of music while you worked on the barn? If so, who were some of the artists, and do you feel they influenced the sounds of Tell ’Em You Were Gold?

Funny enough, we weren’t. There’s something about the quiet and space of being in the barn, working and chatting occasionally, making plans for the next steps.

3) It’s been two years now since the release of Bet on Love, your sixth studio album release. Other than restoring your barn, what are some significant life changes you’ve experienced since then, and how are those experiences woven into the new record? Could you share an example or two?

Bet On Love came out in May 2020, at the start of the pandemic. We found a lot of peace in moving our lives to more home-centered things. We started raising chickens, we got bees, we expanded the gardens, and we spent a lot more time camping and in the mountains. These are all things that were important before but we hadn’t felt like we had time – especially for bigger gardens and animals. We both have project-based brains and loved the time to dig into some new ones. We had some very excellent friendships develop in this time too, with more time feeling grounded at home. Some dear friends we grew closer to and some new friends who have become really important in our lives (one of them is Grace Forrest, who lived on our property with her husband Max Malone from late 2019 to early 2021 – she plays fiddle on the record).

Jason also started building a vehicle, where he was bringing together all the elements we need – touring, moving a family, sustainable, 4wd, safe and super reliable, and relatively simple to find parts for. He rebuilt a 12-valve Cummins motor with our local diesel guru and rebuilt and machined all the parts to turn a 1991 (square body) Suburban into a diesel manual 4wd vehicle. The vehicle is almost completely recycled, gets great mileage, and will be able to run directly on veggie oil. All that to say, songs like “Souvenir” are a direct feeling of joy in the moment, reveling in the time to have sun on your face. And songs like “Cannot Change It All” are from the deep centering love of being in the mountains, and the hope that humans can do better to show that love for the entire ecosystem.

4) Nearly half of Tell ’Em You Were Gold’s 16 songs are in the public domain. Do you notice a personal difference in feeling or emotion when playing other songwriters’ material versus your songs?

Singing our own lyrics (and playing our own instrumentals) brings a specific story with it – whether it’s of the place it was written, the feelings it was written for, or the person it’s talking about. Or maybe also the struggle/ease with which the song was written. Singing other’s material has an open quality to it, where the lyrics get to be interpreted without the specific background story that the songwriter experienced in writing it. In some of the public domain material, the lyrics come with a great vagueness – sometimes written because someone needed words to remember the tune, sometimes remembering small moments of note.

A great example of this is in “Train on the Island”: train on the island, thought I heard it squeal, go and tell my true love how happy I do feel, how happy I do feel. Jason is very much a sounds and rhythms person and he doesn’t listen to lyrics as intently, while Pharis spends more time on the words but is really drawn to the sounds as well. This sometimes results in us experimenting with singing our songs like they’re trads, where we zone into the sounds and the pulse, and the lyrics are a way of moving us there.

5) We’re grateful to be able to offer the World Premiere of your new music video, “Been All Around This World,” a song you each sang before you met. Three questions: Is this footage from the actual recording we hear on the album, who was involved in cutting this track, and could you give us a brief description of the instruments you used for this song?

We are grateful to you for featuring it! Yes, this is the footage of the actual recording you hear on the album. We are very lucky to have musicians who are dear friends come up to Horsefly to record with us. On this track, John Reischman is playing mandolin and Patrick Metzger is playing bass. They’ve both been on our last three records, and we sometimes tour as a band with them and pedal steel player Marc Jenkins (who played pedal steel on “The Dose” and is an associate producer on this record).

The member of the band you don’t see is the engineer John Raham, who usually works out of AfterLife Studios in Vancouver (previously known as Mushroom Studios). This is our third record working with him and his incredible remote set-up (the knowledge! the mics! the pre-amps!) in Horsefly. He is a gently sublime human and truly gifted engineer. John Reischman is playing his 1924 Gibson F-5 Loar mandolin (he’s had it since the ‘80s and has many wonderful stories about this instrument), Patrick is playing a Kay bass with gut strings, Pharis is playing her 1939 Gibson J-35 guitar (two tone bars, for the nerds out there), and Jason is playing his banjo “Papillon” with a small resonator, torrefied maple construction and Romero tonering on an experimental mounting system.

Bonus: Who produced and directed the video, and what was it like working together?

Trent Freeman produced and directed the video and was at our place making videos for nearly the whole recording (plus an earlier part of the summer) with his partner Eva Anandi Brownstein. Together they also created the mini-documentary Tell ‘Em You Were Gold: Behind the Scenes that came out earlier this year, and they took many of the photographs that are in the liner notes. Trent is also a very special musician, mostly known for his work touring with The Fretless. He spontaneously played fiddle on this record on the song “Sour Queen”. It was incredible working together. We were cautious, as being filmed while trying to focus on making a record felt potentially overwhelming and unrealistic. But Trent and Anandi – maybe because they are musicians themselves – were the perfect people for their unobtrusive and gently settling work. They felt like members of the band.