Seattle’s own Peter Donovan has partnered with DittyTV to bring you the world premiere of his new music video, “If I Knew Then,” a smartly-written Dylan-esque track from his debut solo LP, This Better Be Good.

“The songs are more reflective than bitter, more nostalgic than sad,” says Donovan of the new collection. “It’s an album about learning and growing from life’s experiences and reflecting on past failures in the interest of future successes.”

1) Do you remember how you initially got interested in music or has it always been on your mind? Give us a brief background of your musical life.

I was raised on show tunes. My mom would play a lot of musical theatre records at our house when I was young. She listened primarily to classic shows from the 40s and 50s, but I would go to the library and check out whatever CDs I could find under the “Musicals” section, curious about what else was out there. I remember stumbling upon great stuff like Jesus Christ Superstar and Roger Miller’s Big River.

One day I found a copy of The Who’s Tommy. Except it wasn’t the Broadway version — it was the actual Who album. Someone had accidentally misfiled it as a musical. I took the CD home and loved it immediately, but I remember being very confused. It seemed to me to be a very bizarre musical. I could tell there was some sort of plot, but it sounded like the same singer was performing all the characters.

Eventually, I got it sorted out. My dad explained that The Who was a classic rock band, and after that, along with musicals, I started checking out 60s and 70s rock records from the library too — The Who, The Beatles, The Beach Boys, Fleetwood Mac.

By the time I was a teenager, the 90s were in full swing. I bought my first CD (Gin Blossoms, New Miserable Experience), went to my first concert (The Wallflowers at the San Diego Fair), and started playing guitar. I had made a new friend my Junior year of high school, a kid who had just moved to town, and he showed me my first chords and taught me my first song (“When I Come Around” by Green Day). I started writing my own songs a few years later and have been after it ever since.

2) You’ve played a part in groups like All the Real Girls and The Rose Petals, but talk to us about your debut solo album, This Better Be Good. What stories are you exploring on this record that excite you? 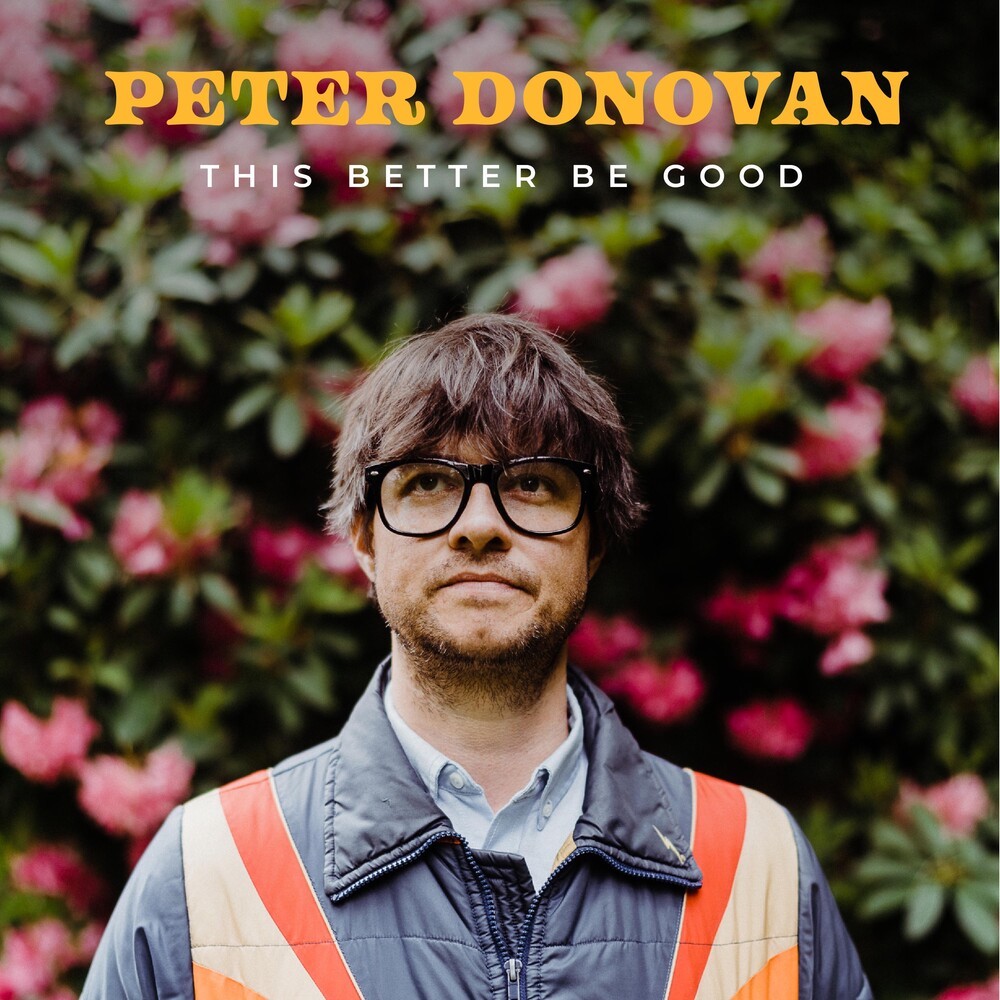 In my past bands, I wrote a lot of story songs, some inspired by real-life events (a different US President inspired each track on The Rose Petal’s record), others pure works of fiction. Either way, I tended not to write about myself all that often.

For my solo record, I wanted to write something much more personal. I decided to take my “story song” approach but use my own life as an inspiration.

The experiences I drew on were past relationships — the ones that didn’t work out. So, on a basic level, this is a break-up record. But, these heartbreaks happened a long time ago, and the wounds are no longer fresh. A few scars remain, but the distance has allowed me a new perspective.

This Better Be Good is a loose concept record about the ups and downs of an ultimately doomed romance between two people. Each song is intended to be a snapshot somewhere along the timeline of their turbulent relationship and inevitable break-up.

The songs are more reflective than bitter, more nostalgic than sad. It’s an album about learning and growing from life’s experiences and reflecting on past failures in the interest of future successes.

3) You recorded the album with producer/engineer Bradley Laina at Strange Earth Studios in Seattle. What drew you to Bradley, and what did you learn from him in the process?

I was (and still am!) a fan of Bradley’s band, and he produced some local records that I thought sounded great. I had only met him briefly before we made the album, but he was very enthusiastic about working together when I reached out.

Making the record at Strange Earth was an extraordinary experience. From the jump, I could tell that Bradley really believed in the songs and was genuinely invested in making the best record we could make. Plus, he’s a triple threat — not only a great engineer and a fantastic musician (cello and electric sitar are among his many performance credits on the record), but he’s also an excellent songwriter and had insight to offer from that point of view as well.

The biggest lesson I learned from working with Bradley is to embrace the imperfections. He wanted to record the album primarily live — just the band and me playing the songs together in the room. The music might not be “by the book perfect,” but I think there’s a spirit and energy to the record that would have been lost if we chased perfection. The imperfections (or “human moments,” as my piano player likes to call them) are, in my opinion, what make the music special and unique.

4) What inspired your tune, “If I Knew Then,” and how does it fit in thematically with the rest of the songs on the record?

The version on the record was the last take of the last night of the recording session. We performed everything together live in the room, other than one overdub…

The Band and Bob Dylan, particularly Blonde on Blonde, were major influences on the ramshackle vibe of this track. With that in mind, once we had our keeper take of the song, Bradley had the band circle around a microphone, tambourines in hand, and we overdubbed a rowdy and chaotic gang percussion track, our nod to “Rainy Day Women #12 & 35.”

This track always makes me smile because it perfectly captures the ever-present enthusiasm and camaraderie while we were making the record. I hope that joy translates to all who give the song a listen.

5) We have the honor of premiering your official music video for “If I Knew Then,” and we want all the details. What was it like to work on this video with Hamilton Boyce and Danny Hahn, and what was the vibe on the day of the shoot? Did anything unexpected happen?

The first time I met Hamilton, the video’s director, my old band was opening for his band, and we closed our set with a cover of “Poor Poor Pitiful Me” by Warren Zevon. After we finished, I was back in the green room, decompressing, and I caught sight of Hamilton’s setlist. Written near the bottom, I saw “Poor Poor Pitiful Me.” It was crossed out.

I had inadvertently performed one of the greatest sins as an opening act — playing a song on the headliners set. Luckily for me, Hamilton was understanding, and we bonded over our mutual love of Warren Zevon. The next day we got together and wrote a couple of songs. We hit it off immediately, and he’s been a great collaborative partner ever since.

I sent him the album asking if he would direct a music video, and this was the song that he gravitated towards. He pitched me the concept, and I was immediately into it. Hamilton also brought Danny on board as well as the two other performers, Chantal Anderson and Neil Ferron.

We shot one day in downtown LA, just outside city hall. The shoot was delightful. Everyone was in great spirits, and it was a lovely time. We didn’t have any permits, so the area was open to the general public while we were filming. Every once and a while, a random pedestrian would wander into the frame, and we’d have to cut and start over, but considering the complexity of doing the whole thing in a single take, the shoot pretty much went off without a hitch.

At one point, in the late afternoon, a gentleman set a lawn chair in the center of the bridge and spent about half an hour broadcasting his complaints about city politics loudly through a bullhorn. We decided that would be an excellent time to take lunch.

So, I’d say that the most unexpected thing was that nothing really unexpected happened!

Bonus: Did you watch The Beatles: Get Back documentary? What was one of your favorite scenes, and do you have any other recent music docs to recommend?

I did watch Get Back. My favorite parts were the behind-the-scenes look at their songwriting process. It was fun watching how they would all help each other, contributing small ideas or certain lyrical lines. It was also mind-blowing to watch Paul write “Get Back,” seemingly pulling it out of thin air as he’s killing time waiting for John to show up.

During the early days of quarantine, I came up with an idea for a daily challenge to pass the time and to keep my chops up. I decided to learn one Beatles song per day. I would spend a couple of hours with my acoustic guitar, recording a different cover each morning. I posted the videos to a Facebook group as friends and friends of friends began posting covers of their own. I didn’t have an end goal in sight; I just figured I’d keep going until I didn’t feel like doing it anymore. I lasted 58 days.

As I was learning daily Beatles songs, I was also writing songs of my own, 11 of which turned into my debut solo record — This Better Be Good. While I don’t think the final recordings sound overtly “Beatle-esque,” the Fab Four were an undeniable influence on my songwriting process.