You may have already heard Georgia native and Nashville-based singer-songwriter Kristina Murray melding her voice seamlessly with Rounder Records artist Logan Ledger in their newly released duet cover of Vern Gosdin’s “That Just About Does It,” but now you get to go behind-the-scenes and glimpse the actual recording in a new grin-inducing documentary-style music video premiering on DittyTV.

We also invite you to learn more about Murray’s musical tendencies in 5 Questions. “Country music is a never ending treasure chest of discovery; I think I’ve heard it all and then someone unearths a gem that floors me– it really keeps me invested in this genre I love so much,” says Murray.

1) When you were a child in Georgia, did you grow up in a musical household and how did that lead you to Colorado and to Nashville? How long have you been in Nashville and what excites you most about its creative scene?

My folks loved music, but didn’t play or sing. They almost always had music playing though; my daddy loved blues, Dylan, and world music, and spent many summer evenings sitting on the back porch listening to music, smoking cigarettes and drinking Red Dog. I was pretty musical early on, playing violin from 1st grade to 9th grade and then switching to guitar right around sophomore year; I was ALWAYS singing, too– my momma said I “came out the womb singing”!

I wanted to play guitar at my church camp and youth group and started learning chords and harmony singing. My summer camp was in north Georgia and so bluegrass and old gospel was certainly a big part of that education. I fell in love with bluegrass and moved to Colorado to pursue studying that genre and getting into that scene. After about three years out there, I started performing and writing traditional honkytonk and 70’s-country-influenced music. Hitting the ceiling in Colorado, and wanting to advance my career with songwriting and touring, I moved to Nashville eight years ago in 2014.

I think one thing I love about Nashville is all the incredible music that has historically come from this place, whatever combination or collaboration of song, artist, musicians, studios, time and trend manifested that music– it’s really stunning and continues to humble me. Country music is a never ending treasure chest of discovery; I think I’ve heard it all and then someone unearths a gem that floors me– it really keeps me invested in this genre I love so much.

Additionally, my favorite artists and albums that have come out in the last five-ish years are generally my peers and my friends that live here in Nashville; everyone here is SO good and it certainly challenges me to strive to be a better writer, singer, guitarist and performer. I like that.

2) You’ve stated that you consider yourself a “words person,” someone who starts by creating lyrics and then composing melodies. Is there a particular ritual or setting you prefer for writing lyrics and do you usually write alone or with other people?

I mostly write alone, though there are a few folks that I love to write with (Logan being one of them!). I don’t have any rituals but I have notes upon notes of lyrics, titles and theme ideas in my phone and in notebooks. Truly unique melodies unfortunately don’t come as easy as words do for me, but sometimes if I’m starting from scratch instead of with words, I’ll rip on a tune I’ve been diggin lately to try to manipulate it into a new song. For example, I’d love to write just a classic, straight the fuck up rock n roll tune like the Dead’s “Truckin’.”

3) We’re pleased to present the world premiere of your brand-new music video, “That Just About Does It,” a Vern Gosdin tune you cover with Rounder Records artist Logan Ledger and an all-star cast of musicians. What was the vibe during the session, and who all was involved? 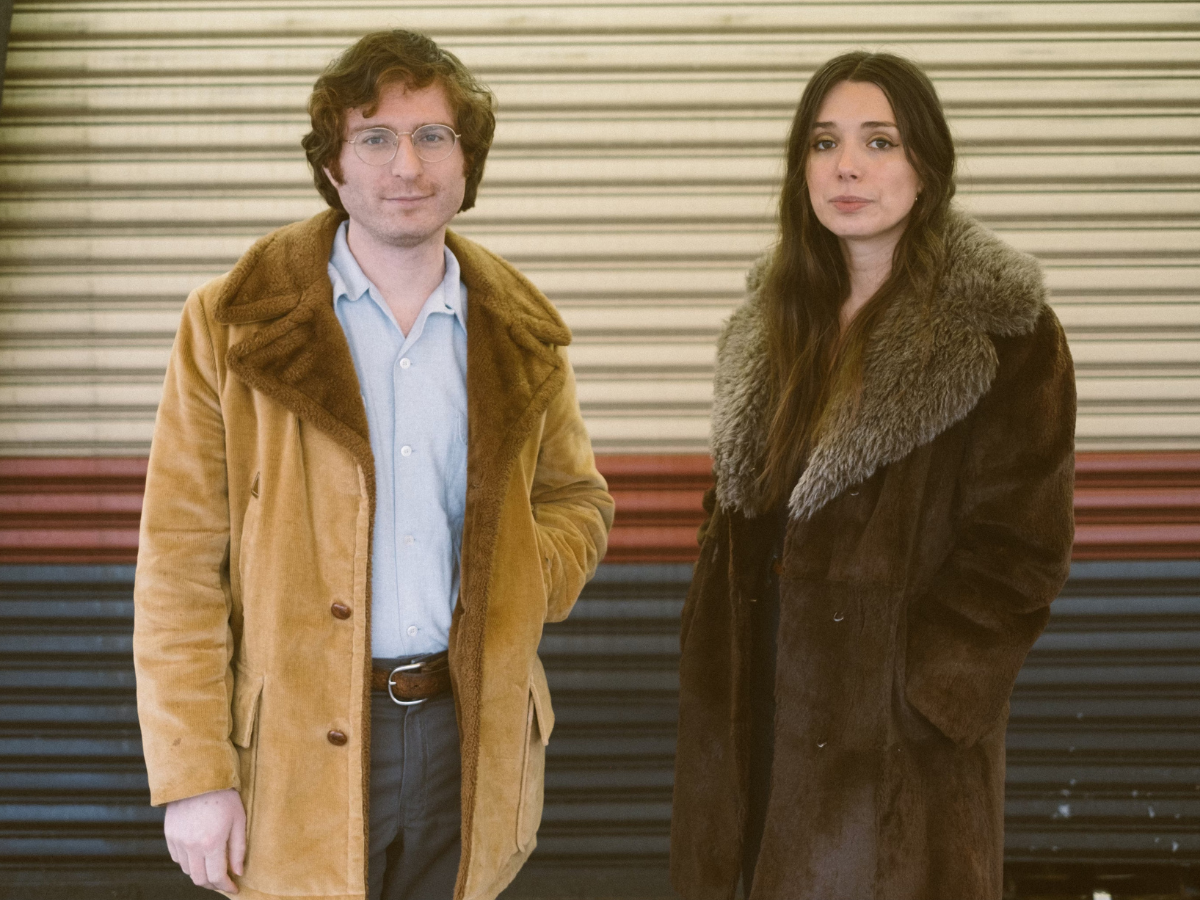 This was such a special day and fun session; about a year ago to the day! Though we’d talked about doing a covers project for a couple of years, my dear friend Misa Arriaga (who is the producer/engineer and also played on the two songs) and I had been actually plotting the logistics of the recording for about three months and it finally came to fruition last July when we assembled the core group of musicians– Dom Billett on drums, Adam Chaffins on bass, Nick Bockrath on electric guitar, Ryan Keith on keys and Logan Ledger on acoustic guitar.

Misa had asked another guitar player, Ethan Ballinger, to play on the session and he initially hadn’t been able to confirm; a little bit before we got started recording, Ethan just walked up to the house with guitar in hand! So we added him on baritone guitar. Beau Bedford also just showed up on the stoop the morning of the recording— I think he was just there to hang with Misa– but that’s the kinda guy that’s not gonna sit back while recording is happening…so we put him on another acoustic guitar as well. Music City Studio B is a house in Donelson and so we put Beau in the bathroom cause there was literally nowhere else for him to go!

The vibe was so electric and buzzing but also relaxed and comfortable– I would describe it like warm tones through a prism. It was a really interesting collection of musicians who, I think some of them had peripherally known of each other but hadn’t necessarily worked together before. I mean, these guys play with or have played with all sorts of incredible artists and bands– Cage The Elephant, Kacey Musgraves, Yola, Miranda Lambert– and so to bring them all together and with what they uniquely bring to the table sonically, in this small house… it was just feel good vibes and smiles all day. That “DAMN! Making music with great musicians is FUN AS HELL.” Felt very old-school, pre-cosmo Nashville. I feel honored that these fellas played so beautifully and dynamically on these tracks. Also, I love that this video– shot by Schuyler Howie– shows in documentary style the recording of “That Just About Does It.” Stick around to the end of the video for a little surprise!

Bonus: Is this cover tune a part of a larger project?

It’s not a larger project but it IS the B-side of a digital single, my “covers project.” The A-side is a cover of David Allan Coe’s “I’m Gonna Hurt Her On The Radio.” My version is a combination of DAC’s, Keith Whitley’s, Shenandoah’s, and the Bellamy Brother’s versions of that song, though I changed it to “I’m Gonna Hurt Him On The Radio” and put a lil spin on it. Lillie Mae Rische sings a killer harmony part. Give it a listen!

4) Can you recommend any reading materials or organizations to support for those who wish to get involved after the Supreme Court’s ruling to overturn Roe v. Wade?

Oh boy; that’s some absolute shit huh?? I’ve recently donated to Abortion Care for Tennessee; I guess, to me, a way to maybe feel like you’re helping a little in a mostly helpless situation is to donate to local or regional organizations that provide travel funds for women to travel to states where abortion still is legal– women who are essentially seeking to exercise natural autonomy over decisions that concern their own bodies, lives, and futures. The National Network of Abortion Funds has travel fund listings by state and, internationally, the organization AidAccess assists with pills by mail. Thanks so much for asking this question and shining a light on this profound travesty and obliteration of equal rights in this “free” country.

5) You’re out on the road this month sharing shows with Jaime Wyatt, Banditos, The Murphs, and others. What have you learned about your relationship with live performance in the last couple of years (since the pandemic), and how do you approach it differently now?

Obviously, I have a deeper appreciation for getting to do and having the ability to do what I love to do–sing and perform on stage– after not having the chance to do it for over a year. I’ve gotten to the place where I feel confident and comfortable on stage and, when the crowd is hyped and they’re dancing and especially when my band is really cooking, there’s no higher feeling. Playing music with people and for people is so fun and addictive; I am so grateful to people who give their time and treasure to take a chance on me and come see me play. I try to give an entertaining performance to help folks have a good time and perhaps convey a little truth about our weary world and our beautiful thing called life!

Bonus: How about telling us one of your favorite songs by each artist mentioned above and describing why it’s special to you?

Jaime’s album Neon Cross was probably one of my three favorite records of 2020. The songs “Goodbye Queen” and “L I V I N” are my jams.

Banditos’ new record Right On is basically perfect from top to bottom but both the title track and the song “Waves” on that record are real real special. Mary Richardson’s vocal prowess and style are unmatched and everyone should know who she is.

I’ve been touring and playing with my best good buddy Todd Day Wait a lot this year and I think everyone should go see him play his very special songs and check out a tune of his called “Heart Over Mind.”