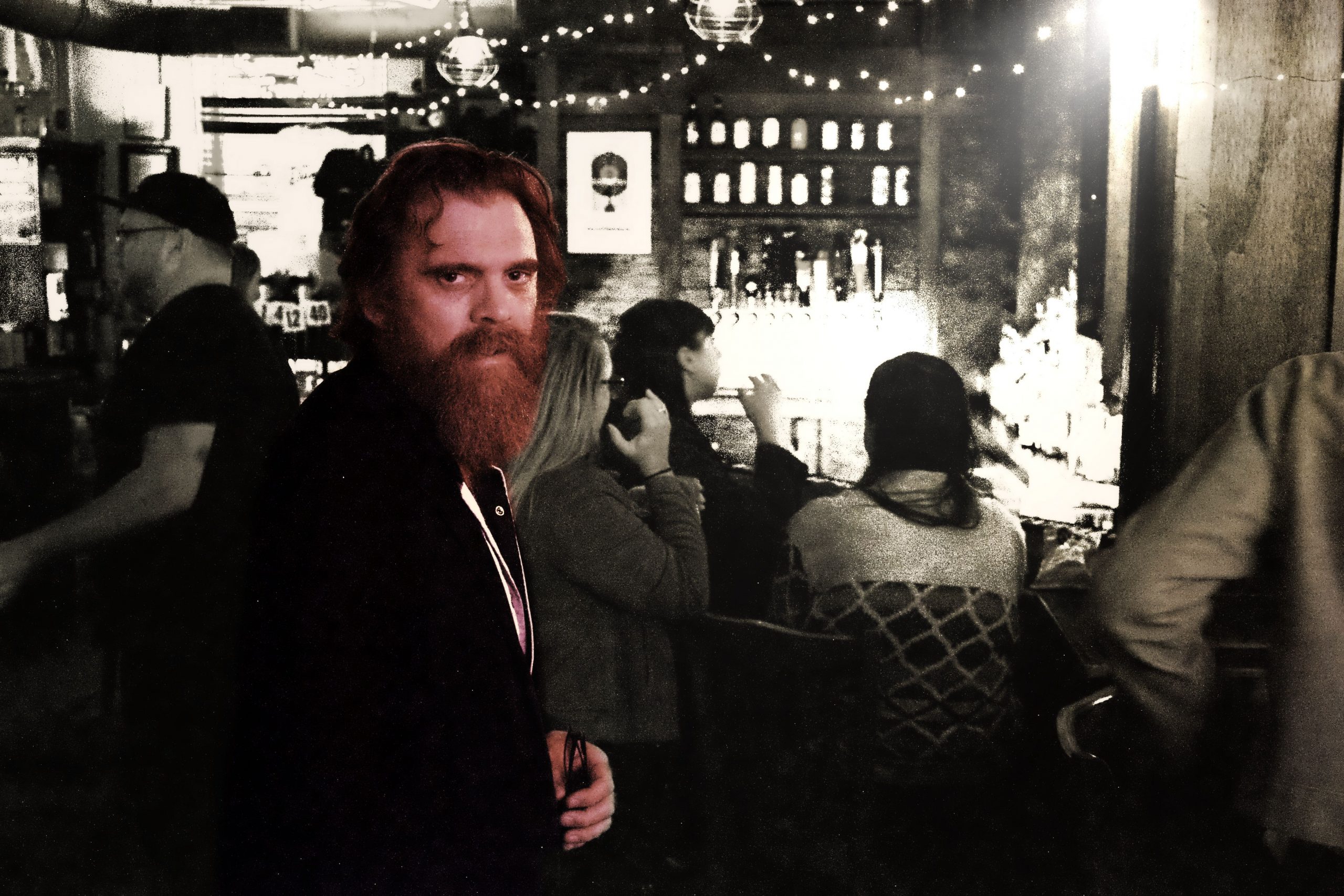 Toronto native David Newbould has partnered with DittyTV this week to premiere his latest music video, “Peeler Park,” a rippin’ and gritty selection off the forthcoming Blackbird Record Label album release, Power Up!, produced by the “eclectic mind” of Scot Sax, as Newbould puts it.

Based in Nashville for the last 13 years, David is an adept songwriter with a taste for loud guitars who details the making of the album for us while uncovering elements of his Toronto roots, the concept behind his Dean Tomasek-designed album artwork, and much more.

1) Talk to us about recording Power Up! quarantine-style, separated by a pane of glass, with producer/collaborator Scot Sax. Looking back, what was heavy on your mind at that time? 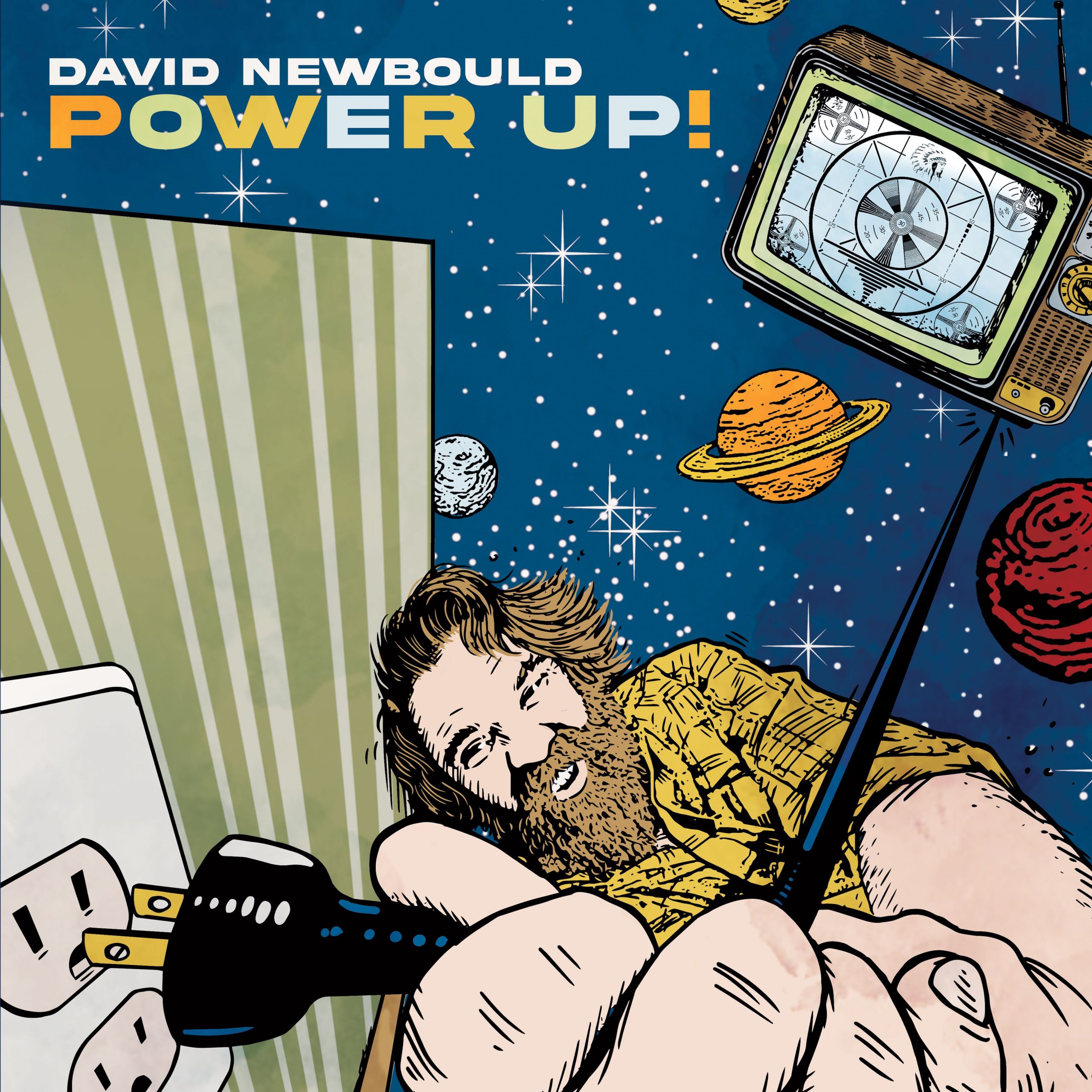 Well yes, but mostly it was just a pain in the ass. We had to pass mics and cords and everything back and forth on the floor, under these cracks in the window setup Scot had made, and if I wanted to come around to show Scot something on the piano, say, he’d have to leave the room and listen from outside. Lots of stuff like that. But we got used to it.

Some elements that came out of it ended up being kind of fun. We really wanted to record live band on a few songs, so we all set up in his back driveway and cut outside, which is the type of thing we wouldn’t have done otherwise. We both have young kids, and his wife (singer-songwriter Suzie Brown) is a cardiologist, so we really couldn’t mess around with it. Most of it was in pre-vax time.

2) What were you aiming for sonically, and were there any new production tricks that you tried out that you’d never utilized before in your music?

Everything started with the song “Power Up!,” and while it was a collaboration, sonically it ended up such a cool creation of Scot’s very eclectic mind, that I wanted to just go for lots of what I wouldn’t have thought of on my own, which in turn would start pushing me to think of things outside the box.

A good example is the song, “Home Depot Glasses.” Early on we cut a really nice version of traditional upright sounding bass, an actual vocal melody, and some trippy organ. But once we got further into the process of the album, it wasn’t interesting enough to me anymore. So Scot suggested a canned organ beat, and I got on that same organ and went for the most Alice In Wonderland stuff I could get, and did a few vocal/guitar takes until I got all the way to full spoken word. I never would have done that before. Overall we were just going for stuff that felt raw, immediate, and exciting, not worrying too much about actual fidelity.

3) Give us a breakdown of the album’s title track. You can tell y’all had fun working on this one. What’s the inspiration behind this song?

I brought my son over for a playdate, and Scot came down with a bass over his shoulder and amp in hand and said, “I took our old TV to get fixed, and the guy said ‘hmm, it won’t power up.” So whaddawe got? We came up with the chorus very fast, based around his bass line, then he got behind the drums and I picked up a guitar, and we just went for about 20 mins with the tape rolling. I kept trying to find the counter riff to the riff I’d come up with, and all those attempts ended up just being the song. At one point we thought there should be some sort of B section, so we went A-C-D. Well Ab-B-Db, since Scot tunes all his instruments down a half step.

Next day he’d edited it all down to 5 or 6 minutes and we each wrote a verse on the spot and sang them. Originally we were recording it as a “duet,” but as the album kept developing we thought, “let’s throw it on and I’ll just sing both verses.” Anyway, we just kept editing it and I have to give him so much credit, he really blew my mind by the end, along with our mix guy Goffrey Moore. And that’s when I knew I needed to make this whole album with them.

Bonus: When did you and Scot realize the song wouldn’t be complete without Jason Threm’s sax contributions?

We had that part full of guitars and it was cool, but not next level. We both know Jason through Bee Taylor and Cody Brooks and just sent it to him and said, “go,” and that’s what you hear. Blew my mind.

Bonus: Who designed the album’s artwork and what did you tell them you were looking for to depict Power Up!‘s energy?

Dean Tomasek. I had the idea of a floating TV and a plug. I was kind of thinking of some of those ELO covers, but just an object floating around through space trying to find a place to plug in. We’d also taken some pictures of me and the plug too though. A couple of days later he sent me a version of what we ended up with though, and I loved it. He’s so good, that Dean.

4) You’re from Toronto originally but have been based in Nashville for many years. What were those Toronto years like for you, musically, and was Nashville on your mind even back then? 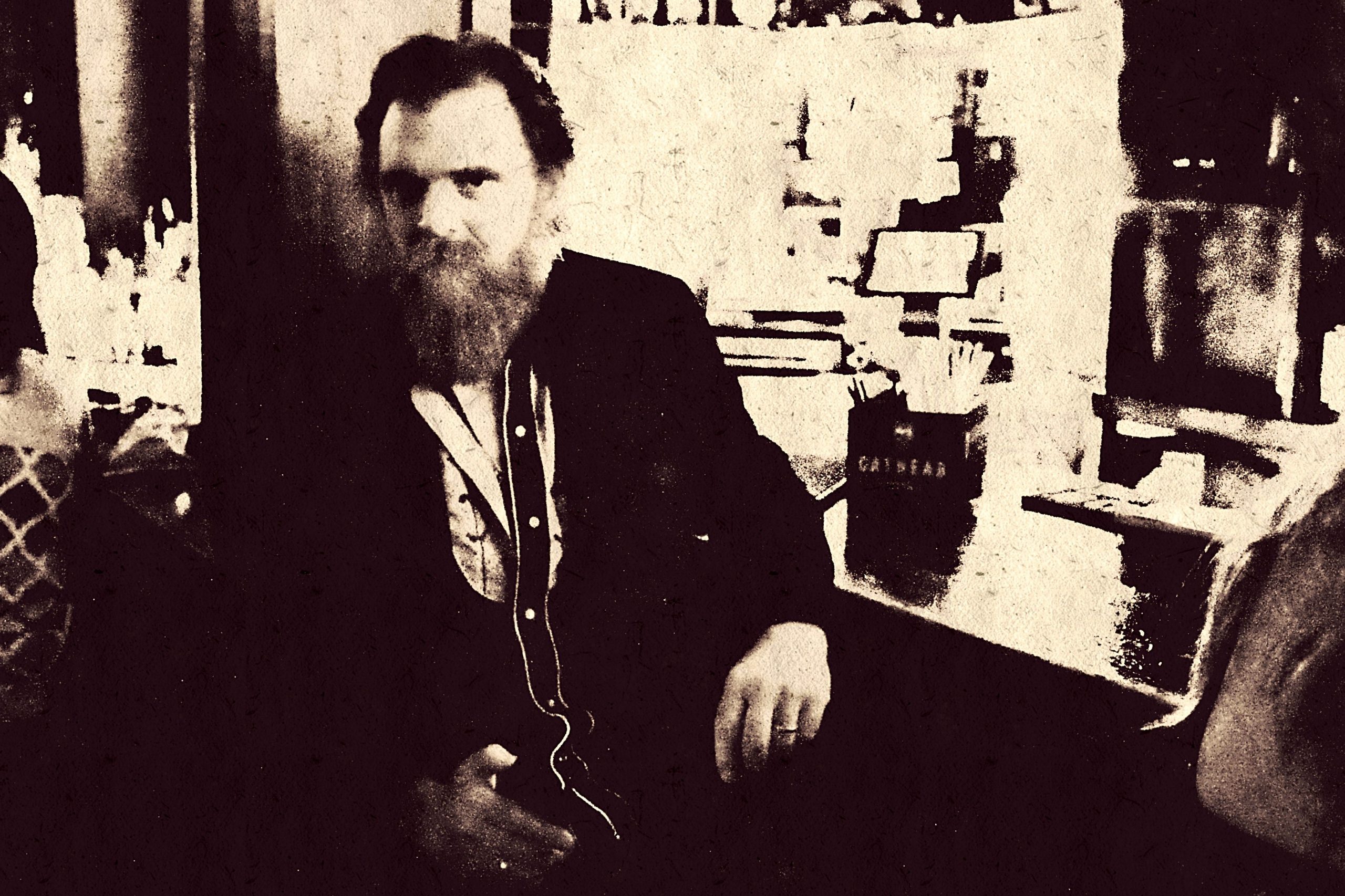 Well, I grew up there though to the end of high school, so my music identity was mostly shaped through all of those years. To me, it felt like I was just wanting to be great, and somewhere more in line with where all my favorite artists were from or migrated to – New York, LA, England… Toronto just felt like where I had happened to be born. Toronto *is* a really great place, but at the time I just felt locked.

I started putting bands together at 14 or 15 and was playing clubs by 17, but it wasn’t as serious for everyone I played with, and I couldn’t see the route to making the type of life or career I wanted by being in Toronto or Canada for that matter. Looking back I don’t know if that was necessarily an accurate assessment – especially looking at how the whole scene up there has developed since then – but it definitely was the driving force at the time behind all my decisions.

I moved to New York City as soon as I could. Nashville was the furthest thing from my mind. I never even thought about it once. It wasn’t until I’d been living in Austin for a time and started learning about the songwriting element of the Nashville industry, and the favorable geographical location of Nashville for touring as compared to deep in the heart of Texas, that I contemplated the switch. But I love Austin and Texas, love New York as well, and Nashville has also been a good home to me for 13 years. Lucky 13!

5) We have the privilege of premiering your new music video, “Peeler Park.” What can you tell us about this song and video?

Well thank you, and I’m privileged myself to have you premiere it. To be honest, it’s kind of a song that goes down the rabbit hole of depression. I’ve never gone to be diagnosed, and I don’t claim that howling, debilitating level of suffering that some people we all know have had to live with, but let’s face it…life can feel awfully bleak and dark a lot of the time, and I’ve spent a lot of long, lonely nights driving around trying to center myself and find perspectives I can deal with. And if it weren’t for my family and the love we all share…well let’s just say I’m grateful to have that to lean on a lot of the time. All the time, really.

So that song is largely about that type of struggle that I know a lot of people have, certainly people in my line of work. And feeling worthy enough to go home and face those you love, and honoring that. It’s such a privilege. It’s hard when you look at all the glass half empty sides of life, but it can also lift you up to look at the glass half full aspects – love and community.

As for the video – we did the “Power Up!” and “Peeler Park” videos in the same shoot, as if they were 2 segments on a late night cable access talk show, hosted by our friend Stuffy Shmitt. We just wanted it to be low budget and cool, and show the energy of the songs and have some fun with it. I love loud guitars.