For those that love The Deslondes – we have something unique to share with you – the very rare occurrence of having every band member participate in an interview. We cover the making of the group’s latest album for New West Records and what it was like to work again with producer/engineer Andrija Tokic, their impromptu photoshoot with Bobbi Rich (aka Mama Hot Dog), how parenthood and living in New Orleans has changed their outlook on life, and much more.

We also have the honor of offering the World Premiere of the band’s three most recent music videos combined into one”Full Cut.” They released three videos from Ways & Means that were all directed by Joshua Shoemaker and each shot in one take. They work together for a larger narrative which you can observe for yourself by watching below.

5 Questions with The Deslondes by Sam Shansky

1) For this record, you were more intentional with the songs and arrangements before entering the studio than with your previous albums. What were some key decisions made before you went into the Bomb Shelter to work with producer Andrija Tokic? And on top of that, could you describe what it’s like to work with Andrija and why you prefer him as producer? 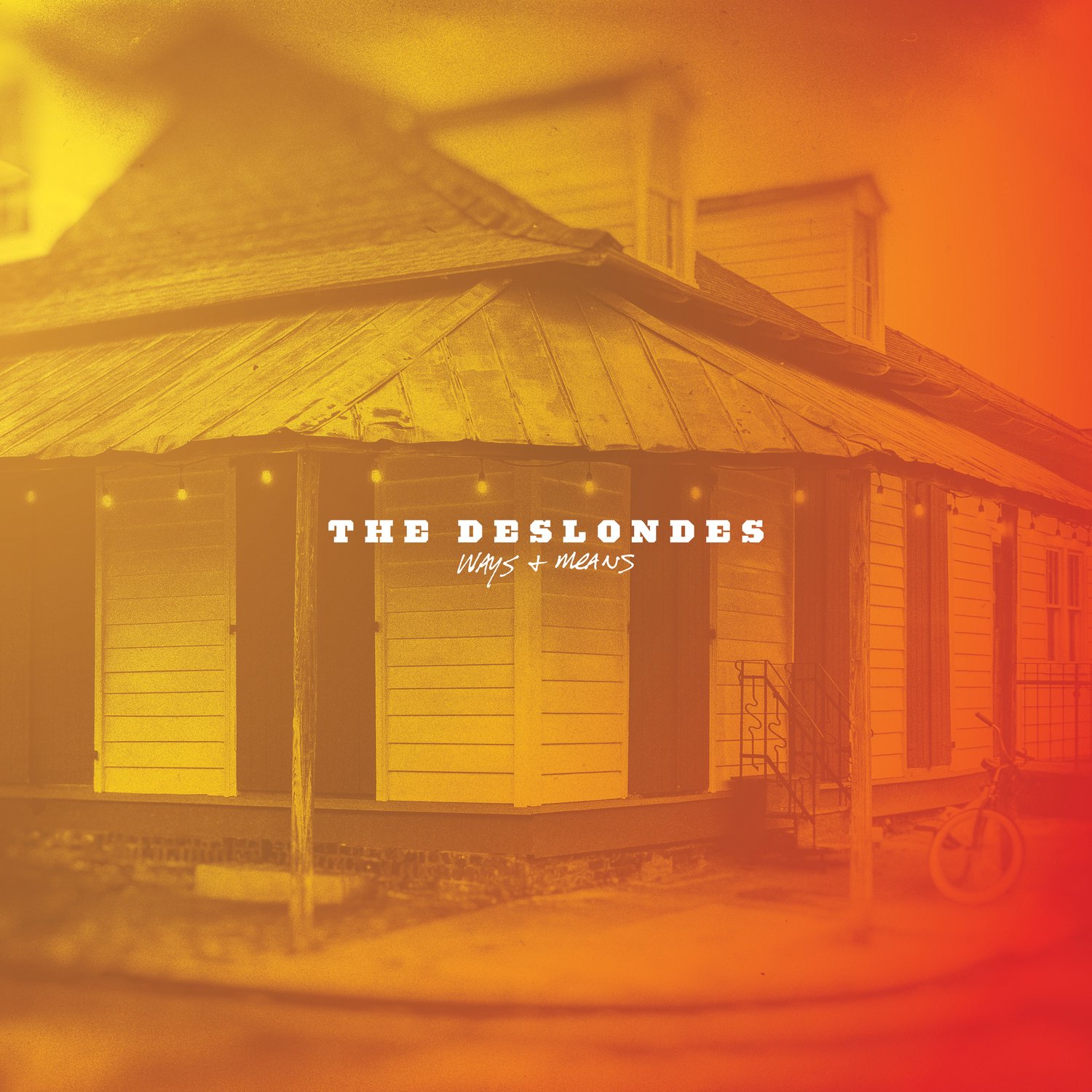 JJ: I think the approach of being more intentional with the songs and production on this record came out of a workflow that we had settled into with Andrija the past few years at his studio. This record for myself kind of kept that momentum rolling with working with him, but as our band and him are practically family, it was like bringing that workflow home to my band for me.

Some key decisions that were made for this album were, for one, doing a lot of pre-production ahead of the sessions, mapping out all kinds of logistics, arrangements, vibe, instrumentation and things which we had also been in the groove with doing on other sessions and honestly I think is really important and have learned a lot in doing so.

Another key decision for this record was to all be open with each other and to have space to process a lot of things that have happened over the years and in doing so being a little easier on each other. It sounds weird to have that be a decision, but forreal you kinda have to make that choice to deal with a lot of emotions and ideas in working creatively with others, especially if you all know each other real well.

Working with Andrija is a special thing. Not only is he a master at his craft, but you also get to dive into the process deeper in my experience than with other producers, and is gifted at navigating personalities and mental states during the sometimes overwhelmingly large process that is making a record. He also is extremely hard working, but never lets the workload prevent the times from being fun. I’ve cracked up so much in that fuggin studio.

Bonus: What’s your favorite work (other than your own) that Tokic has produced, and why?

JJ: My favorite work Dre has produced besides co-producing with us is probably all his work with Nick Woods. He also just produced a record for Sunny War that I got to do session work for, and is amazing. Can’t wait for that one to come out.

Bonus: What’s been the most surprising response to the new record so far?

JJ: The most surprising response to the new record honestly is that it’s been five years since our band put out a record. 😳🫠 I’m just really grateful to be able to have done another one with all these guys, I love em and am proud of our work and the songs on this record, and I hope people enjoy it!

Bonus: What’s The Tigermen’s Den, and how would you describe the space and the collaborative vibe there?

JJ: The Tigermen’s Den is a spot that we have spent time in New Orleans, putting a lot of energy into what we do in our band. Shows, Recording, songwriting, demos, hanging out. The vibe is pretty timeless in a way, and with a lot of group experiences there in our band and among friends and family in our community, it felt right to put it on the cover of this LP.

2) Would you mind taking us behind the scenes on your photoshoot with Bobbi Rich? How would you describe Wernig’s artistic and directorial style, and what is it about her and her work that appeals to you?

Riley: I met Bobbi through mutual friends when I was living in Nashville, as I do from time to time. We were all just quick buds and she had a lot of other projects going on at the time and was running all over but squeezed us in last minute one evening while we were at the studio. I know she would have rather set up a set and had more time to plan it, as I think she usually does to set the scene and vibe, but she was down to roll with us and our schedule, and we were extremely grateful that she worked us into hers.

Her work is beautiful and very captivating and almost otherworldly or multi-dimensional, and it takes you to somewhere you and your eyes have never been. We shot the photos and then had to run right back into the studio to finish the record.

Bonus: Whose car was that you shot in?

Riley: The car is actually our producer and engineer Andrija Tokic’s station wagon. I believe it is a Chrysler Town & Country that he has had for a few years. He got it from an old funeral home. Anyhow it was Bobbi’s eye that caught it and said we have to include it in the shoot. If you haven’t heard of her or seen her work, I highly recommend you check out Mama Hot Dog!

3) I know the general history of The Deslondes, going back to when you guys put out Holy Cross Blues as Sam Doores + Riley Downing and The Tumbleweeds, but how did this group initially form? What’s the origin of this brotherhood you’ve all built together — where did you all come from, how did you first meet, and what led you to New Orleans?

Sam: Well, it’s a bit of a loooong spiraling staircase that eventually brought us all together. I apologize in advance if this gets tedious. I first met Cameron Snyder during a brief stint at Evergreen College after taking my first couple post-high-school years to busk around Kansas, Texas, New Orleans & Ireland. Cam and I hit it off immediately and started a band with our friend Ben called Broken Wing Routine. I dropped out of Evergreen that Spring to travel with B.W.R. to the Woody Guthrie Folk Festival in Okemah, Oklahoma. It was there we first met Riley Downing, who was in a band called Tamper Dan & The Dirt Merchants. For a few years, Cam & I would get together every so often to play some gigs and kept coming back to the Guthrie festivals in Okemah as well as Pampa, TX. I moved back down to New Orleans soon after dropping out & during that time started my own little country band called The Tumbleweeds (the members of which included Dan Cutler, Matthew Bell & Tony Fricky). Eventually, we asked Riley if he’d like to join The Tumbleweeds. He agreed and we started touring with Hurray for the Riff Raff a bunch. Dan and I also became full time band members in HFTRR during that time.

Now I warned you this was long winded, haha…

The Tumbleweeds went on tour one summer with Pat Reedy and The Long Time Goners (who had both Cameron Snyder and John James Tourville backing Pat up at the time). Our drummer Tony ended up joining Pat’s band and John James joined ours. Now we had 4 out of the 5 of us all together and we got invited to open up a run with Alabama Shakes and Michael Kiwanuka. That’s when we released our album Holy Cross Blues as Sam Doores + Riley Downing & The Tumbleweeds (because ‘The Tumbleweeds’ was already taken). On that run, we played in Seattle and casually asked Cameron to sit in with us on a couple songs to play a little Kick & Snare and sing some harmonies just for fun. Well, it sounded too good once we added Cam, so we asked him if he’d like to hop in the van the next morning and join us. He’s been in the band ever since & after that, we decided we needed a real band name that wasn’t a math equation… so we named ourselves after the street I lived on and where the band got its start – Deslonde St., in the Holy Cross neighborhood of the Lower 9th Ward.

4) How has living in New Orleans and the rich culture there affected both your sound and your perspective on what it means to be a musician?

As far as our sound goes, I would say that it is very much informed by the music of New Orleans’ past. You can easily hear the influence of R&B, gospel, and jazz on our albums. But it was the influence of these sounds that brought us to the city in the first place. When I think of the rich culture of New Orleans today, what comes to my mind most prominently is bounce and brass bands. And while that stuff is floating all around us, I can’t really say that it has much of an influence on the sound of the band.

5) For the band members with kids, how has becoming a parent affected your relationship with music, and how are you implementing your musicality into your parenting style?

Dan: Obviously, it’s gotten harder to have an itinerant lifestyle with kids, so I’ve put more energy into playing music locally in New Orleans. I’m fortunate to live in a place where live local music is a viable career choice! I don’t try to push music on the kids, but it’s also been nice to provide an example of a somewhat alternative career with gigging and touring and songwriting. If you can make a living with music you can probably make a living doing just about anything! Apart from that, I’d say having kids provides me with more patience and perspective than I had before, which shows up in all kinds of little ways day to day, including in my playing and musical life.

JJ: Becoming a parent nine years ago now has affected my life relationship with music in an extremely helpful way. It definitely made me get my act together in a time of my life that was pretty all over the place. The love, responsibility, and time management of being a parent have given me a good handle on a lot of aspects of life, including being a professional musician. My kids are 7 & 9, and I think the biggest implementation music has for us is kinda more the feeling you get from music. Like listening to something all together that gets you so hyped, and carrying that feeling throughout the day. Like we will blast some old thrash bands or rap music in our van on the way to the skate park and just get amped up. Or we will listen to country and Cajun 45s after dinner and play cards, and just enjoy the tunes and time. I have so many great memories of my dad playing me (very loud ) music, and I hope my kids will have good memories of a childhood filled with music.

The band released three videos from Ways & Means that were all directed by Joshua Shoemaker. They were all shot in one take and work together for a larger narrative. Watch the World Premiere of the videos combined into the”Full Cut” below.