C.J. Lewandowski of The Po’ Ramblin’ Boys has checked in with us to discuss the band’s recent album release Never Slow Down on Smithsonian Folkways, getting hooked on Bluegrass as a kid by visiting Dolly’s Stampede, what it’s like to own Jimmy Martin’s 1973 Ford F-100 pickup, and much more.

The Po’ Ramblin’ Boys’ Never Slow Down Tour 2022 is in full swing, and you can see dates and purchase tickets now at theporamblinboys.com.

1) Congratulations on your recent release of Never Slow Down on Smithsonian Folkways! Connecting the past to the present is an important part of bluegrass, but so is breaking new ground. Mind sharing a couple of examples of how you’ve done both with this record? 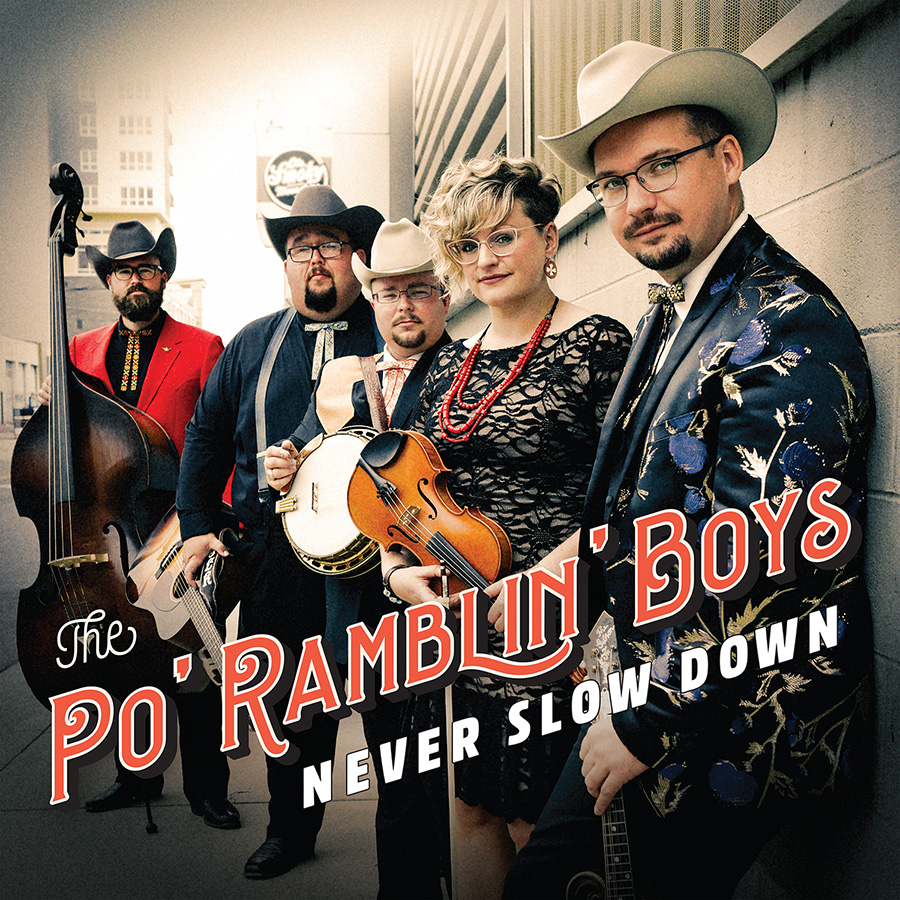 Thank you for that, we are so honored to be working with an historic label such as Smithsonian Folkways. Not only is connecting the past and present close to our hearts, we want to leave our own mark in history as well. Being true to yourself is honestly what we are doing. Whether it be covering George Jones, The Stanley Brothers, Hazel Dickens, etc., sitting down and penning a song from in house, or finding something never recorded by a certain songwriter, we want to feel the material and it’s got to have depth.

Emotion breaks down the barrier of “Cover Songs,” if you will, and we try and let the song do the talking. We love to bring artists out of the darkness with some songs we have dug up, as well, and that’s always a lot of fun. We are all preservationists naturally by how we were raised in Traditional Bluegrass, it’s ingrained in us.

It’s satisfying to cut a classic song that impacted us in some way, but add our own twist to it. One of the biggest compliments we get is fans telling us they had never heard a “such and such” song until we sang it and it’s 50 years old. That’s Preservation at its finest, to me.

Bonus: What drew you to Smithsonian Folkways, and what has that experience been like, working with a label of that caliber? 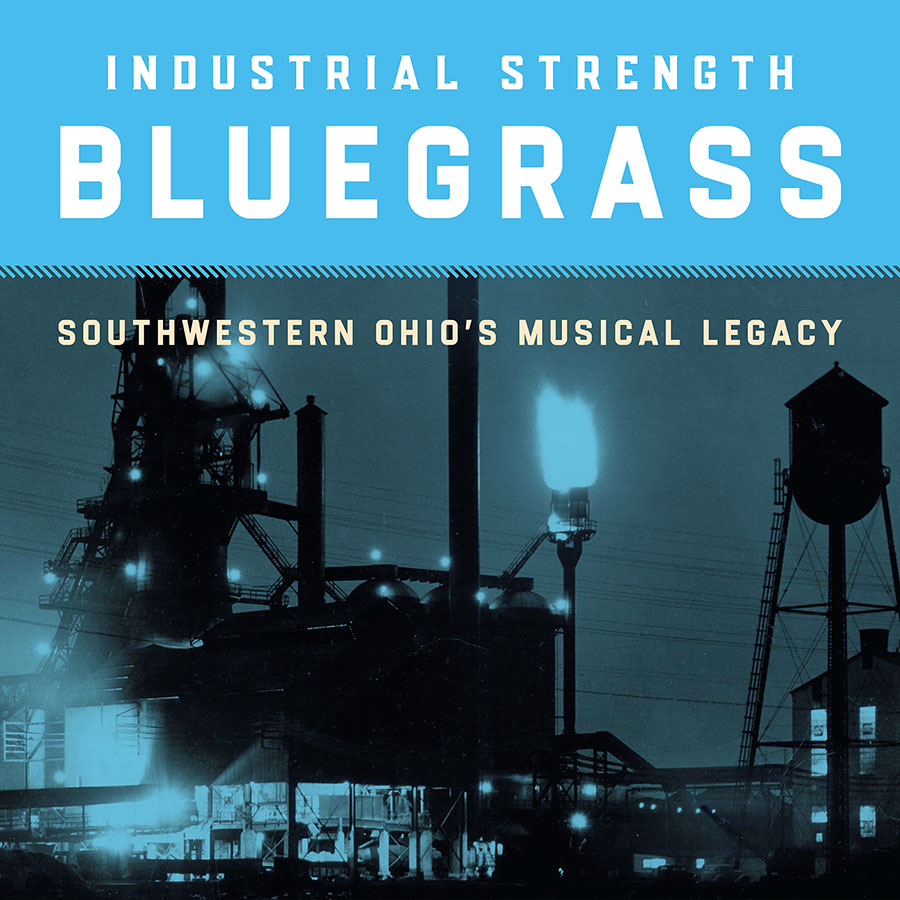 Smithsonian has been nothing short of a blessing. When were starting the album, we were with another label (Rounder Records) and it was a good situation, as well, but we were in the middle of a pandemic, and one thing that I really wanted was a drawn out plan for was marketing. We had no idea when we were going to be able to sell these records in person again. That was our bread and butter, but we could not do that, so what was the plan?

The label came to us with an idea that just didn’t seem to be the direction we wanted to head into, so I remembered a talk I had with John Smith of Smithsonian Folkways a few years prior at Pickathon. I called John and let him know we were looking for another label and what we were looking for in that label. Within 48 hours, we had a proposal and phone meeting and it just seemed right.

Their preservation, of course, is something I love. But Smithsonian Folkways is in the heat of making some of the BEST current American music today. They are a living and breathing label that works hard to present the best examples of every facet of American Music. The diversity is enlightening and exciting. When they dipped a little more into the Bluegrass world with the Industrial Strength Bluegrass project, that led me further to believe that Smithsonian Folkways was the right choice for us. History preserved yet making history every day!

2) Talk to us a little about the unique camaraderie of your group. What are some traits of The Po’ Ramblin’ Boys that you treasure?

The Po’ Ramblin’ Boys have been a unit since 2014 but we have mostly all been friends since 2008, so when I say we fight like brothers, we sure do! But we have the unique ability to fight and argue about something and be over it about 5 minutes later. We all have our own unique abilities, talents, and traits, that’s for sure. And when Laura Orshaw joined the group in 2020, it was like she had been there from the start.

One unique trait I cherish is the time we all spend together. Our friendships don’t stop when we get off stage, like some bands. We hunt, fish, shop, drink, pick, work on cars, do little projects, float the river, whatever together. There’s usually two of us together every day and there’s never a day where we aren’t in communication with each other. I’m an only child, so these truly are my brothers and sister.

3) Do you have a first memory associated with bluegrass?

My first memory goes way on back to when I was about 10 years old and my family took a week long trip to where I live now, Sevierville, TN. We went to Dolly’s Stampede and the reshow was a four piece band named Horse Play. It was so entertaining and so real life to me. There is nothing between myself and the entertainers except a sound system. They were creating all the music and vocals right there in front of my eyes. I was hooked right then. I even told my family that I was gonna live in East Tennessee one day, they didn’t believe me, but here I am working on 10 years as a Tennessean!

4) Word on the street is you’re keeping bluegrass history alive in your garage. What can you tell us about what you’ve got in there? 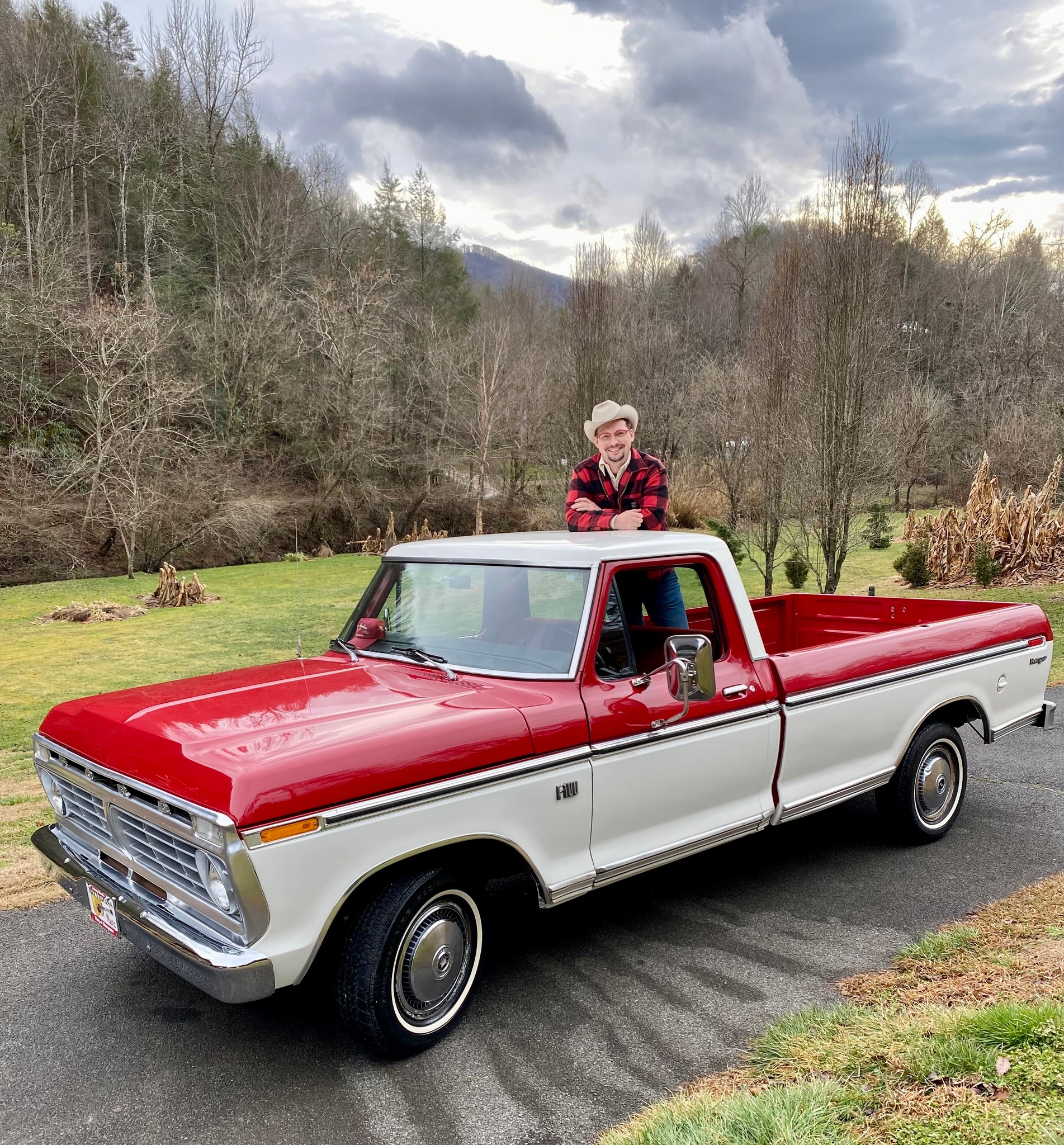 Word must be getting around on that old beast, haha. I like classic cars and trucks, and a fellow Bluegrass nut/car guy was showing me his collection one day. He told me to flip back the plastic on a particular car and underneath that dusty sheet of plastic was Jimmy Martin’s 1973 Ford F-100 pickup that he bought new and used for 30+ years to hunt out of. I never knew where it had went until that moment. It was perfect! Still had Jimmy’s name and signature on the title and his 8 track still in the deck.

It took me two years to strike up a deal with him, but I finally brought the truck home in the fall of 2021. It’s a treasure. I never thought in my wildest dreams that I would own Jimmy Martin’s truck or anything Jimmy owned for that matter! Smithsonian Folkways has taken a shine to it and featured it on their social media some and it actually was included in the liner notes of Never Slow Down – that was Stacy Chandler’s brilliant idea. It’s just like old, good music. You can shine it up and make it fresh again. Just because Jimmy’s gone doesn’t mean the truck should sit in a barn and rot away. I wanna take it to festivals and show people Jimmy’s truck, my truck. It’s made a lot of history but it’s bound to make a lot more!

5) I’m told you also recently journeyed to Greece to buy a mandolin. Where does your drive to collect things come from, and what did you pick up while there?

I sure did. In December 2020, amidst a global pandemic, I decided to fly to a COVID hotspot on a chance and see if a Lloyd Loar-signed Gibson F-5 mandolin was real. It was real and I brought home a beautiful mandolin signed and dated the same day as Bill Monroe’s famous mandolin, and it’s also two serial numbers after Bill’s. Pretty exciting to bring an undocumented original Loar-signed mandolin home to the states again after being in Europe virtually its whole life. There is an in-detail interview of my journey for the Loar mandolin through The Fretboard Journal Podcast if anyone would like more information on this crazy adventure that I took.

I don’t really know if I can honestly tell you what drives me to collect and hoard some things. I am unique and love unique things. Bluegrass is unique in all aspects, so I feel I fit right in there. The man who really taught me a lot about music and mandolin was Jim Orchard, and his house is loaded with memorabilia and collectibles and instruments. He lives, eats, and breathes Bluegrass and Classic Country music. His Influence has to have something to do with it. I’ve always been a collector, even previous to Bluegrass music.

I had one of the biggest collections of Hot Wheels/Matchbox cars, and I still have them. My dad and I would collect them. I collected Pogs, you remember them? Legos, the dang Looney Tunes Character cups from McDonald’s. All the St. Louis Cardinals commemorative baseballs. Lord, I found a box in the closet the other day, no idea what it was. I opened it up to find a couple hundred baseball cards. Had no idea I still had ’em. I may have a problem. I even found a mandolin the other day that I forgot I had!

Bonus: Do you have any other instruments you’re currently excited to own and play?

I am an instrument lover! The Greek Loar, “Ulysses,” is still in the shop right now having a complete go-over and a later finish is being removed. That will be my main axe, for sure.

I usually play between two mandolins, a 2020 Gibson Master Mandolin modeled after Pee Wee Lambert’s old Fern Loar (The Stanley Brothers) and a mandolin that belonged to my hero, Don Brown. I grew up 30 miles from that mandolin, back home in Missouri and spent a lot of time with it growing up. A good friend of mine owns that mandolin and lets me take it about anytime I want to and “stretch its legs” as he says. It’s a Lloyd Loar signed F-5 dated February 18, 1924. It’s an incredible mandolin that is filled with Missouri Bluegrass history. I am the third generation Missouri mandolin player to be the “caretaker” of this instrument and it means the world to me to play it as much as I do. It dons Don Brown’s name to this day on the custom pearl truss rod cover.

I also recently picked up another Lloyd Loar signed F-5, dated April 25, 1923, from the family of the original owner. A friend and I split it. It is MINT and sounds amazing. I have been taking it to a few shows to see what it will do on stage, but I get so scared with that one because it is so clean!

Bonus: What’s ahead for The Po’ Ramblin’ Boys in the remainder of 2022? 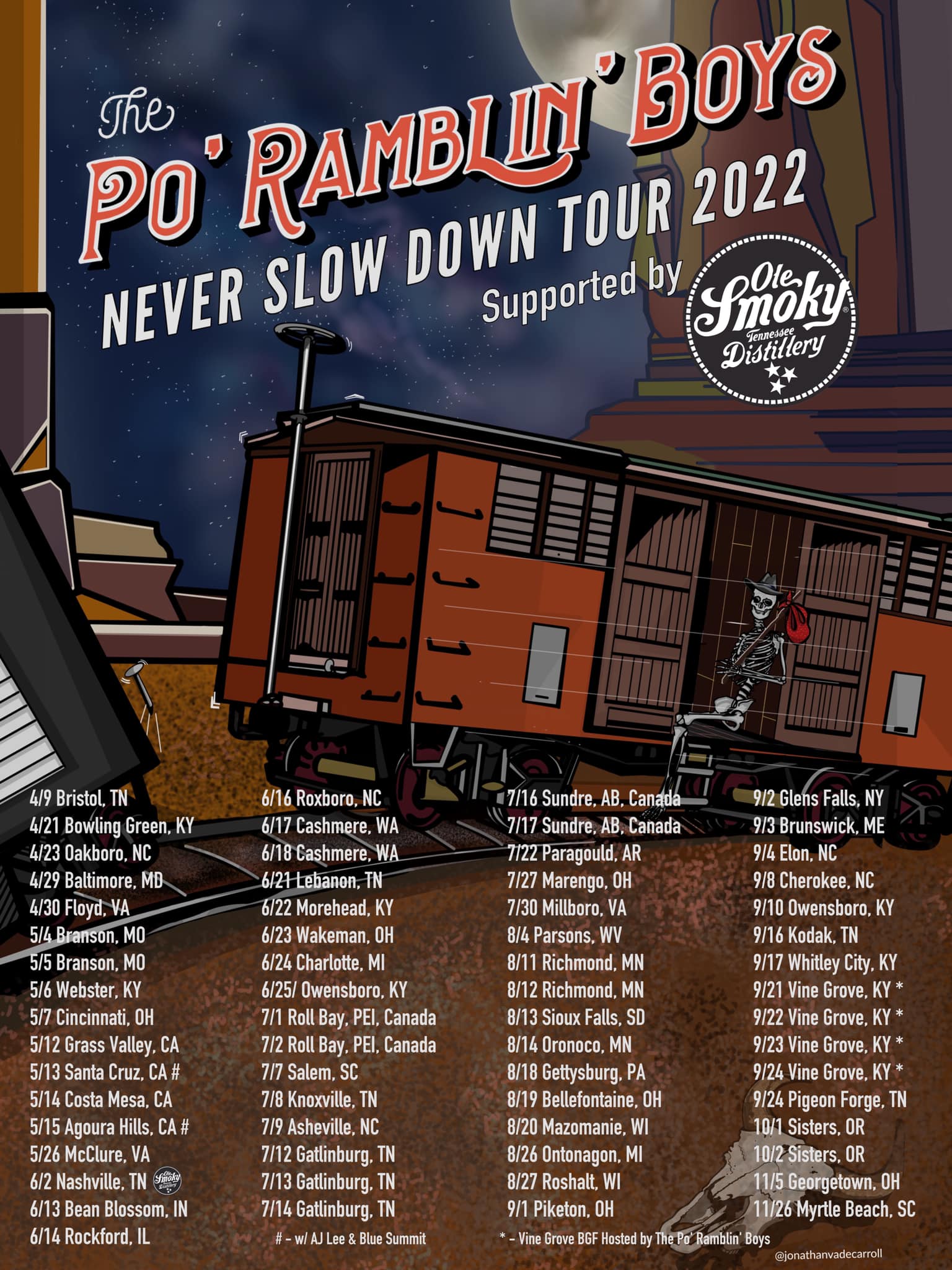 The name of the album is very appropriate because we plan to “Never Slow Down.” We are excited for the possibilities of what this new album and Smithsonian Folkways will lead us to. The Never Slow Down Tour 2022 is heavy this year and we are tickled with that, along with adding new dates what seems like every day. A new bus is coming with our latest partnership advertised in wrap form… “Ole Smoky Moonshine, C’mon Live a Little.”

It’s great to have that relationship as well because we started right there in Gatlinburg, TN at the Ole Smoky Moonshine Holler as a house band. We look to expand our horizons, musically, and we want to enjoy every day we can doing what we love. Some people don’t get to do what they love for a living, so we don’t take a bit of this for granted. We are truly blessed and I am truly blessed to live the dream I dreamed of from about 10 years old with my best friends.