Peter Mulvey & SistaStrings is a Milwaukee music mashup you need to know. The group’s upcoming studio album Love Is the Only Thing will release on August 12th via Righteous Babe Records, and today, we’re chatting one-on-one with Mulvey to learn about the making of the record and what inspired it in the first place.

1) Congratulations on the upcoming release of Love Is the Only Thing! Following Live at the Café Carpe (2020), this marks your second album release with acclaimed duo SistaStrings. What’s at the heart of this new collection of songs, and who do you feel needs to hear the message most? 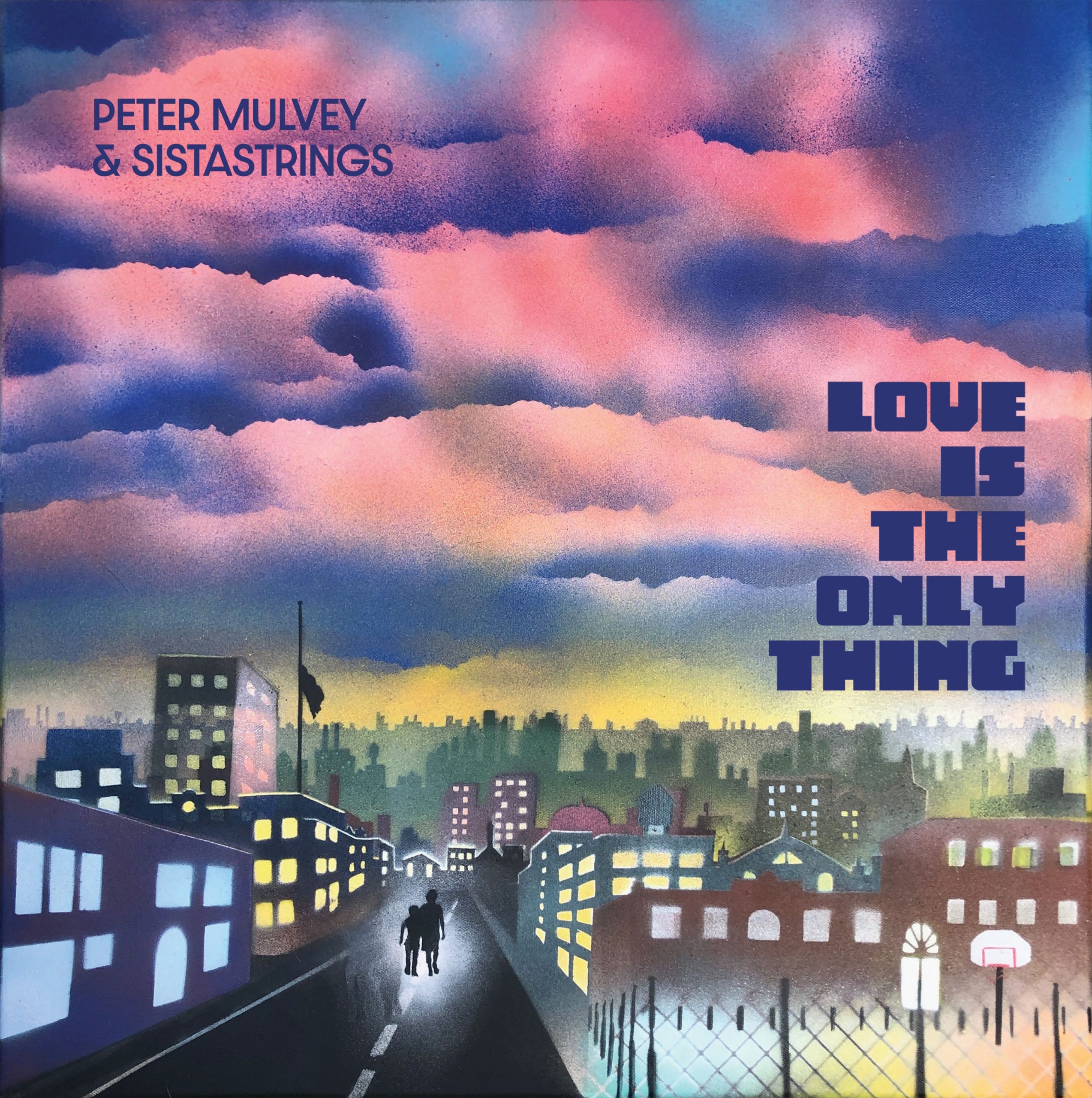 The heart of this gathering of songs is the old story: our fragile little lives, our families, our circles, with their warmth and frailty, juxtaposed against the storm clouds of this era. Given how stormy it’s been, what with the Autocratic Lurch our politics is taking, the burning continents and the acidifying ocean, and the pandemics and the murder hornets (don’t forget about the murder hornets!)… we all need to hear these songs, or any songs, any art, that reminds us that there is more good than bad in the sum of us humans. Our families, our friends, our neighbors- people of goodwill and compassion have come together to stave off any number of collapses. This is yet another time to be brave, however small we feel, and however accurate that feeling might be!

Bonus: Could you tell us what makes Café Carpe a special place for you?

I think it’s a special place for nearly anybody who loves a thoughtful, literate atmosphere, with a low-key deadpan Midwestern sense of humor and perhaps the finest small listening room within a thousand miles. What makes it special is the proprietors, Bill and Kitty, who devoted their lives to being a small restaurant/listening room in the unassuming Midwestern town of Fort Atkinson. It has the feel of an Algonquin Round Table, only with the Green Bay Packers occasionally seasoning the conversation.

2) You’ve done a lot of collaborating over the years. Mind sharing on your creative relationship with SistaStrings? How did you first connect, and what was the catalyst to begin recording together? Did you know of Chauntee & Monique from back in Milwaukee?

I first met Chauntee and Monique at my brother’s Unitarian church, and then a couple weeks later, Mike Mangione opened a show for me and they were in his band. I promptly hired them out from under him. We hit it off like brothers and sisters, and fell into a quartet, with Nathan Kilen on drums. We have a lot in common as Milwaukeeans, as artists who seek joy in our performances, who love to improvise and work off the cuff. It feels now like it was always meant to be a collaboration, even considering we’re nearly a generation apart.

Bonus: Could you describe how you felt when you saw the Rosses on stage with Joni Mitchell, Brandi Carlile, and all the other brilliant musicians at the recent Newport Folk Fest?

Oh my god. Watching this magic ride they’re on has just… it makes me so, so happy, so proud, kinda verklempt, frankly. Of COURSE they’re so deserving… but not everyone who deserves the recognition gets it. And they are getting it, and I am SO proud of them and inspired by them. Funny- I remember when they moved to Nashville, Chauntee said, “I like this town! You give someone your business card and they call you the next day!” And I said, “No… when YOU give someone your business card, they call YOU the next day!” I mean… they’re just… SO… GOOD! And to see them shine… it’s the best. I shake my head in wonder and gratitude every few days.

3) When you were coming up in Wisconsin, what music was most popular with the kids in your area, and what were you listening to that set you apart?

On the playground it was Prince and Run DMC and in the roller rink it was Olivia Newton John and the Village People. I wish I could say I listened to things that set me apart but I listened to the Police and to Rush on the rock station like all the other nerds. It really wasn’t until I got to college and took a semester over in Ireland that I got into a wider, hipper selection of stuff. To me now, it’s Ellington, Martin Hayes, Greg Brown, the Beastie Boys, Tom Waits, Beyonce…

4) As far I know, there’s only one cover on this record, the title track – a Chuck Prophet tune from his album Night Surfer. What’s the story there, what are some notable differences between your and Chuck’s versions, and what draws you to his unique songwriting style?

Chuck produced a record for me back in 2014, and I was knocked the fuck out by his writing, his attitude, his hurricane of a persona. I’ve learned a dozen of his songs, I’ve studied him the way I’ve studied Tom Waits or the Beatles or Joni. This one just fit with this batch of songs, it seemed like the perfect closer. His version is all Roxy Music crazy-ass drum solo followed by handclaps and strut and swagger… ours is more just earnest folkies hollering in a tiny room. [Listen to “Love Is The Only Thing” via Under The Radar]

5) Aside from songwriting, you’re also a published author responsible for the excellent children’s book Vlad the Astrophysicist. You mentioned in your TEDx Talk back in 2013 that you enjoy writing letters. Do you have a favorite book composed entirely of letters (like an epistolary novel), why is it your favorite, and have you ever considered writing one of your own?

Aw, thanks… I’m proud of that book. Also, I love a question that includes the word, ‘epistolary.’ So: there are two things that leap to mind: James Baldwin’s 1962 essay, “Letter to My Nephew”, and a book that was intended as an echo to it, Ta-Nehisi Coates’s “Between the World and Me.” They’re both extraordinary works. Coates is bleaker and perhaps more blunt, but they have in common a ferocious love. I doubt I will ever write an epistolary novel, but I might try my hand at a record full of epistolary songs… you never can tell.