Maja Francis is a Swedish country singer-songwriter of the pop persuasion whose new record A Pink Soft Mess was released in late September via Benny Andersson’s label RMV Grammofon. “A lot of the songs on the album are about my mental health struggles, but also about the beauty in between,” says Francis, a courageous writer and angel-voiced artist who’s been referred to as “Emo Dolly Parton.”

This new record is Maja’s return to country music after a stint in pop territory. “I missed my singer-songwriter me, and the fast food vibe of the music bizz I was in at that time didn’t fit me. That’s when I lost the joy for music, paused for a year and my debut album slowly started to take its form… I’ve never felt more rooted. This album is all me, no compromises.” 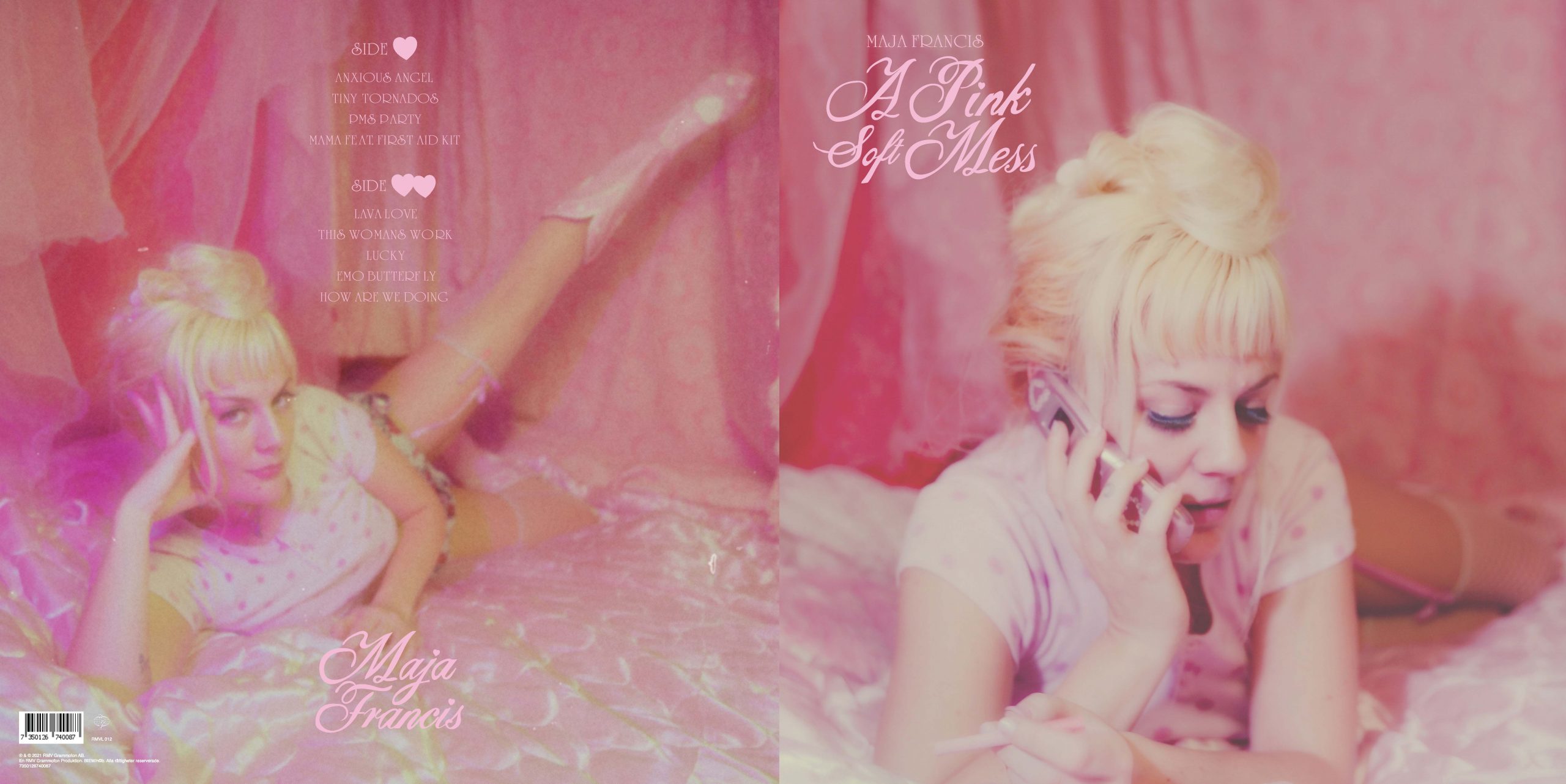 1) What are the essential themes of your new album A Pink Soft Mess and what are some key things that you learned throughout its creation process?

A lot of the songs on the album are about my mental health struggles, but also about the beauty in between. I started writing this album after a long depression and a break up with music. After months of sleep and healing, I slowly started to get melodies in my head again and words came to me, and my pink soft mess was slowly being made. I’ve learned so much in the process, one of them being time. I need quiet time to create, if it’s too busy nothing comes out. I also learned, with the help from my dear co-writers and producers Johannes & David, that my voice has to lead the way. And that I hate auto tune haha!

2) You’re based in Stockholm, Sweden. Could you describe the current music scene there and share a few names of fellow Swedish musicians that you admire?

After the pandemic, I feel as if there are more small venues popping up, and I love that! I’ve missed being able to pop into a bar catching a band play on a Tuesday night. Stockholm was a lot like that when I moved here 15 years ago, and I feel like it’s heading that way again. There are so many artists here I admire, to name some of them: GRANT, Nadia Nair, Augustine, Sarah Klang, Lune.

3) You recently collaborated with First Aid Kit in a Satin Bed Session for a performance of your song, “Mama.” You and Klara Kristoffersson directed the video together. What was that experience like for you, and what initially inspired the tune?

I loved recording the Satin Bed Session! We were singing on a satin bed, eating pizza and hanging out a day in the outskirts of Stockholm. I wrote the song for my mom. I realized now that I’m an adult that I understand so much more about her struggles, and how they are so similar to my own. And when my aunt passed away two years ago, I held my mom and I was thinking how I want to give back all the love she’s ever given to me. And how intense, beautiful and complex the love for a mother can be. So, I wrote a song about it and asked Klara & Johanna to join me. I was so happy when they said yes. I really love to sing with them.

4) A Pink Soft Mess is your debut LP. What has your musical journey consisted of leading up to this milestone?

I started to write songs when I was around 16, and when I moved to Stockholm I recorded these songs on my computer and put them all out on Myspace. Then I released an EP on my own label when I was around 22. Myspace also led me to a collab with an artist in Nashville, so I went over there and we started a duo and toured around the east coast in his camper van. When I came back home to Sweden (with a broken heart) I went into the pop world releasing some EPs… but I never felt quite rooted in that. I missed my singer-songwriter me, and the fast food vibe of the music bizz I was in at that time didn’t fit me. That’s when I lost the joy for music, paused for a year and my debut album slowly started to take its form… I’ve never felt more rooted. This album is all me, no compromises.

5) What are your plans for 2022, and how has the COVID-19 experience altered your viewpoint of being a musician and artist?

I’m hoping to be able to go on tour outside of Sweden! That would be a dream… but it all depends on how the world looks, of course. Covid 19 reminded me of how we are all connected, and it definitely reminded me how I can’t control or plan everything. But since I had been sick and kind of isolated before Corona came along, there wasn’t that much of a difference to me personally. It was just another year of taking it real slow and keep on healing.

Bonus: You’ve been referred to as Emo Dolly Parton. Do you have a favorite Dolly record or song, and could you tell us why it’s your favorite?

Ohhh wow, she’s so amazing and to even be compared to her is such an honour. It’s so so hard to choose an album but one of my favorite albums is Little Sparrow from 2001, and the song “My Blue Tears”. I think it kind of shows the more sad part of her. I also love the TRIO album with Emmylou and Linda.