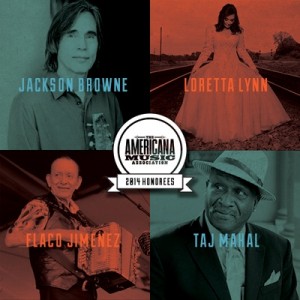 Loretta Lynn will add another honor to her career list when she receives the Lifetime Achievement Award for Songwriting from the Americana Music Association. The award will be presented at the association’s 13th Annual Honors & Awards ceremony, presented by Nissan, Sept. 17 at the Ryman Auditorium in Nashville.

Loretta has written many of her classic hits, including the autobiographical “Coal Miner’s Daughter,” “Fist City” and her debut single, “I’m a Honky Tonk Girl.” She has previously received a Grammy Lifetime Achievement Award for her contributions to American music.

In addition to Loretta, famed singer/songwriter Jackson Browne, musician Flaco Jimenez and blues artist Taj Mahal will be presented with special awards from the Americana Music Association. Jackson will receive the Spirit of Americana Award, Free Speech in Music honor, co-presented with the First Amendment Center. Flaco and Taj Mahal will receive Lifetime Achievement Awards for Instrumentalist and Performance, respectively.