You are here: Home / News / Jon Spencer Sings the Hits on DittyTV 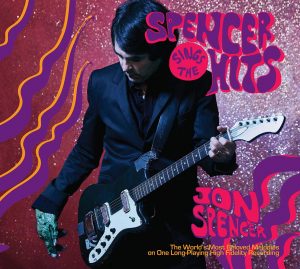 Jon Spencer has an appreciation of roots music. Whether it’s blues or rock and roll or rockabilly (even psychobilly), he somehow chaotically churns them all up and puts out an amazingly original and varying array of music. He recently played the DittyTV studio for a Concert Series premiere that airs May 1 at 8 p.m. CDT. And that same energy you see in his live performances is who Jon Spencer is. His enthusiasm and passion are contagious even if you’re just on the phone with him a thousand miles away.

Spencer is most known for his work as part of the Jon Spencer Blues Explosion but he’s been a part of Pussy Galore, Boss Hog, Heavy Trash, and other groups, including, currently, the HITmakers. “We’ve been together less than a year,” Spencer says. “It’s still new. I’m excited about doing work with the full band.”

That band consists of Sam Coomes on keys (and he creates the bass sounds on synths), M. Sord on drums/percussion, and Bob Bert on drums/percussion (yeah, it’s a lot of percussion). Together with Spencer the group has been playing songs from the album Spencer Sings the Hits, and you’ll see several of those in the Concert Series, but Spencer is excited about the future of the quartet.

“For Spencer Sings the Hits, I wrote all those songs myself,” he said. “That was before this band really came together. We’re working on songs for the next record that will be more of a full-band collaboration.” The group leaves soon for three weeks in Europe to be followed by domestic concert dates through the summer and fall.

The new songs are sure to have Memphis-area influences, which have been constant throughout the career of the New Hampshire-born Spencer. “I like musicians who have a strong personality,” Spencer said. “I like the outsiders and those who are a bit rough hewn.” He cites acts such as The Panther Burns, Charlie Feathers, Rufus Thomas, Junior Kimbrough, and R.L. Burnside as influences, the latter of whom toured and cut an album with Spencer. 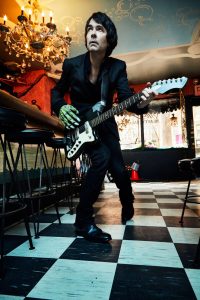 In the ’90s this new record label came out called Fat Possum and they had some amazing artists,” Spencer explains. “R.L. Burnside had a record on Fat Possum called Too Bad Jim and I loved it. So I tried to get R.L. to open for us on a series of dates. It was selfish, really. I just wanted to see and hear R.L. play. At first we were politely told ‘no’ but eventually it happened and it was great. We’d ask R.L. and his band (including his grandson, Grammy-nominated Cedric Burnside) on stage for an encore and that eventually led to us cutting A Ass Pocket of Whiskey (released on Matador Records in 1996) together. That was really some of my favorite times with the Blues Explosion.”

While Spencer clearly has a deep reverence for the blues of yesteryear, his sound is more often called punk blues—a bluesy garage rock infused with extra energy. It’s the music he wants to make for a long time. “As long as people are into it and my health holds up, I’m going to keep on playing,” Spencer says. “I still find it deeply satisfying. It’s my passion.”

Be sure to catch Jon Spencer and the HITmakers Wednesday, May 1, in their Concert Series premiere. If you miss that show you can tune in at 8 a.m. CDT May 2 or 1 p.m. CDT May 5.