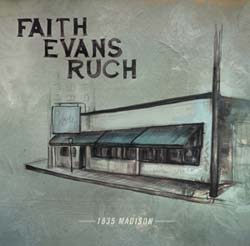 It used to be that a typical day for Faith Evans Ruch was full of heart beats, medical charts and newborn babies. In the summer of 2011, the registered nurse decided to give in to her muse, pick up a guitar and pour out her heart. Now, two years later, she’s released her debut album and is finding herself ever more at home in Memphis as she writes her page in this chapter of the city’s musical story.

Armed with a newfound confidence and a fresh batch of songs, Faith booked time at Music+Arts Studio to record. With producer Kevin Houston (North MS Allstars, Lucero, Patty Griffin) at the helm and session players like Luther Dickinson (North MS Allstars, Black Crowes) and Rick Steff (John Prine, Cat Power, Lucero), the 11 song set glides gracefully across the hills and valleys of the South’s sonic spectrum. Heavily influenced by her classic country roots, songs like “Too Stupid to Cry” ring with a world-weary wisdom well beyond Ruch’s 25 years. The resulting album, 1835 Madison, is anything but a throwback. Lead single “PBR Song,” with its easy melody and lilting horn lines, recalls the best moments of Cat Power’s “The Greatest,” while “Your Soul” swings gently between its front porch rocking chair paced verses and free-wheeling leaf-in-the-wind chorus.
Much like Ruch’s wandering road to its release,1835 Madison is an album that comes as a pleasant surprise from a previously unknown place. Dubbed “too good to be a debut” by internationally published music critic Silver Michaels,1835 Madison announces Faith Evans Ruch’s arrival on the musical map. If it is any prediction of her future, not knowing where the winding, dusty road will take her suits her just fine.