You are here: Home / News / Chatting with Teri Bracken of Brontë Fall 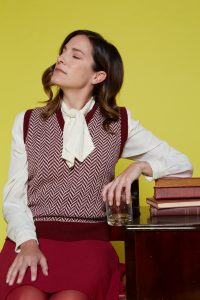 Brontë Fall, the songwriting pen name of classically trained multi-instrumentalist Teri Bracken, embodies the spirit of a centuries-old push by the Brontë sisters to have their—and all women’s—voices heard. Within her just-released sophomore effort, Finishing School, Bracken embraces Charlotte, Emily, and Anne’s fight against the ever-evolving societal restraint on women.

The album’s sixth and final track, “White Dress” was produced and mixed by Matt Odmark at Grey Matter Studio. DittyTV is happy to offer the DittyTV Debut of the song this Wednesday night, Aug. 26, at 11/10c on The Curve.

“Everyone and their mom is getting hitched,” Bracken says about the subject matter in the song. “I come from a very traditional background where most women settle down at home a few years after college to raise their families. As I get to the age where that’s what I should be doing or want to be doing, I feel more pressure to follow suit and less inclined to do so. Perhaps underlying it all in the song is my fear of marriage due to what it might mean for my career and my status in society as a female. What has been very heart-warming, however, is the amount of women it has connected with.”