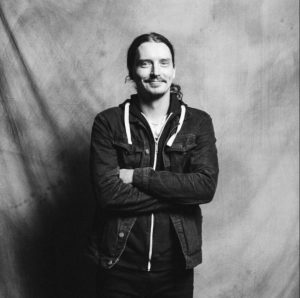 Caleb Elliott’s first solo album drops this week but he already has thoughts on what success might look like: “Just outlast everybody else,” he says with a sly grin.

Talking at a coffee shop in downtown Florence, Ala., (home of Single Lock Records) Elliott is casual and relaxed when he offers the tale of Forever to Fade, an album nearly three years in the making.

Seven songs were recorded in 2016 but Elliott wanted Ben Tanner (Single Lock Records co-owner and Alabama Shakes keyboardist) to play a major role in the project, both playing and producing. “I asked a busy man to record a record,” Elliott says, so it was more than half a year before he got back into the studio. Elliott went to work writing more songs, playing in cover bands, and doing session work in the meantime. He was officially signed to Single Lock Records, as well, which helped ease the financial burden of the project. Eventually 16 songs were recorded; 12 made it to the album.

It’s quite a memorable debut. Starting with the introduction to “Makes Me Wonder,” to the final bars of “Black Lung,” Elliott takes you on a sonic experience full of gorgeous grooves and occasionally, symphonic strings. As good music should, the album defies easy categorization. You can call it indie folk or chamber pop or swamp-art-rock on anything else but the bottom line is that it’s good. Really good. An array of players helped create this smashing solo debut, such as the aforementioned Tanner on keys, Jeremy Gibson on drums, Michael Stephens on guitar, Shawn Stroope and Zac Cockrell on bass, and Kimi Samson on strings.

“Caleb brings a really impressive arsenal of tools and talents, and his songs don’t always follow the typical rules or structures of a lot of singer-songwriters,” says Tanner. “They usually surprise me in where they go melodically, harmonically, or structurally.”

It has been quite a journey for the preacher’s son from Natchitoches, La. Raised in a strict religious home as the son of a preacher, Elliott didn’t listen to secular music (other than some classical works) or have much pop culture exposure at home. He started playing cello in third grade but was embarrassed to tell his friends. “As it turns out that’s really the thing that opened doors for me in music,” he says.

He later picked up guitar and says he’s “pretty good” on just about any stringed instrument. He attended college at the University of Louisiana at Lafayette and his musical world expanded while he pursued a degree in biology. Playing in cover bands paid a lot of his school expenses his final couple years in college.

Afterward, he was discovered by Dylan LeBlanc, who asked Elliott to tour with him. Then LeBlanc recruited him to come live in the Muscle Shoals area of Alabama, a place rich with musical tradition and legendary studios. Elliott became a session player on cello and backed acts such as John Paul White, Lera Lynn, Donnie Fritts, and Sean McConnell. But eventually Elliott knew he wanted to move from sideman to frontman. The album slowly took shape. And now he’s excited to tour in support of McConnell most of the month of March and with fellow Single Lock artist Nicole Atkins in Europe in April.

Elliott says he’s excited about the future. “I’m really at ground zero in terms of my solo career,” he says, followed by a sip of coffee. “It’s great to have this album finally being released but I guess in this business it’s all about the next record. I see it as probably a two-year cycle so I just want to tour my butt off, take advantage of any opportunities that come along, and hopefully make another record in a couple years.”