You are here: Home / News / Book Review: The Band 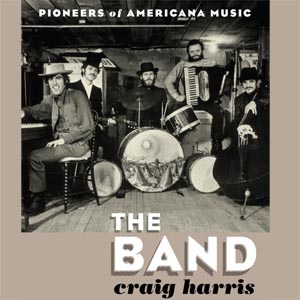 Craig Harris’ book is the third major book on The Band, the other two being Barney Hoskyn’s Across The Great Divide and Levon Helm’s autobiography, This Wheel’s On Fire. At times the book is riveting, particularly the interviews with various group members about their beginnings, and also the period before and after The Last Waltz.

However, the book is also riddled with wrong names and facts, errors in continuity, and numerous other contradictions.

After a brief opening chapter about Tour ’74, Dylan’s reunion tour with The Band that was also his return to touring after an eight year layoff (with a few sporadic appearances), Harris goes into a detailed history of the folk movement, going all the way back to labor organizer/songwriter Joe Hill. During this history, he mentions the song, originally a poem by Alfred Hayes set to music by Earl Robinson, “I Dreamed I Saw Joe Hill Last Night,” and suddenly the book switches to 1969 to Joan Baez singing it at the Woodstock Festival. The point is, if you’re going to delve into that kind of history, then mention the man who first made the song famous, namely Paul Robeson, who recorded it on the album Songs of Free Men for Columbia Records in 1942.