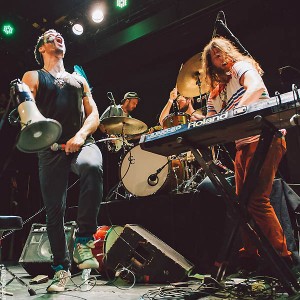 BLACK TAXI is one of NYC’s most prominent live acts, smashing an anything-goes punk ethos together with pop sensibilities, unparalleled energy, and brilliant songwriting. The result is a raucous stage show, heavy on harmonies, spitfire guitar licks, body paint, and all manner of instrumentation. Their style has been described varyingly as “grit-pop” or “dance punk”, and though their songs hint at the Talking Heads, Cake, and Daft Punk, they are driven by something entirely new and infectious.

BLACK TAXI songs can be heard on radio stations from Maine to California, accompany hit TV shows, provide the soundtrack for film, and hit the airwaves on commercial airlines. They debuted on the CMJ Radio 200 at #180 and quickly rose to #80, putting their 2012 release “We Don’t Know Any Better” in the #2 spot for self-released albums. Their music video “Shoeshine” was an Official Nominee for the Webby Awards, and their most recent video “Hand” debuted on AOL Music.

BLACK TAXI’s first full-length offering Things of that Nature received strong reviews in publications throughout the country. For their second full-length album they returned to The Bunker Studio to record with Aaron Nevezie, who has worked with Grammy nominated acts like The Black Keys and Danger Mouse.