You are here: Home / News / AMA-UK Is “Staying Connected” 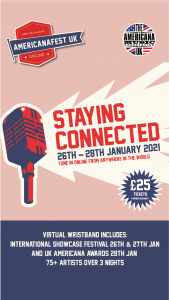 The UK Americana Music Association (AMA-UK) has revealed the nominations for the seven member-voted categories of the UK Americana Awards 2021, and also the winners of the coveted special awards presented by the AMA-UK board. The Awards show itself will be preceded by two evenings of showcases, featuring exciting international partners including Music Prince Edward Island, Thirty Tigers, Canadian Independent Music Association, North Carolina Music Export, Sounds Australia, Yep Roc, and Loose Music from the UK. Tickets for the whole event, which will be held virtually Jan. 26 – 28, are on sale now.

Emily Barker, Laura Marling, Robert Vincent, and Yola lead the way in the UK categories with two nominations each and Courtney Marie Andrews tops the international categories with a pair of nominations. The full list of nominees is below.

UK AmericanaFest will be virtual in 2021. Although the AMA-UK board members realized that the coronavirus pandemic would make it impossible to host the event across venues in Hackney as they had for the past five years, they recognized more than ever the need to stay connected, for artists to enjoy vital showcase opportunities, and for the community to celebrate the success of its award winners, all of which inspired the decision to proceed online. The Awards and showcases will be viewable across all devices and platforms via a unique UK AmericanaFest website.

As part of this year’s activities, AMA-UK along with charity partners Help Musicians, is focusing on mental health and wellbeing, with a new set of aims to include inclusivity and diversity. They are signed up to Keychange and will continue to have a 50/50 gender balance across everything they do.

Nominations for the Member-Voted Awards:

Special Awards Presented by the AMA-UK Board: 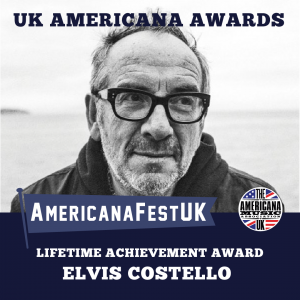 Trailblazer Award: Christine McVie
The Trailblazer Award is selected by the board members. This special award celebrates a UK artist, duo, or group that has taken an exceptional path, inspiring others to follow in their footsteps in developing the Americana genre.

Songwriter Legacy Award: John Prine
This award was designed this year especially to celebrate the life and work of the legendary songwriter John Prine, who we sadly lost to COVID-19 this year. The board wants to recognize the importance of John Prine’s writing in shaping this genre to what it is today.

Bob Harris Emerging Artist Award: Robbie Cavannagh and Demin Marriner
The Bob Harris Emerging Artist Award is selected by Bob Harris OBE, and celebrates the breakthrough artist, duo, or group that has particularly impressed the legendary music broadcaster throughout the year. This year’s award goes to two artists who have shown the true spirit of community during the pandemic and made special efforts to support other artists during this difficult time.

Grassroots Award: Music Venue Trust – Mark Davyd and Beverly Whitrick
Selected by the board members, the Grassroots Award celebrates the sometimes unsung heroes of the UK Americana scene. It is presented to individuals working in the industry (in a capacity other than as artists) who have made outstanding efforts to support Americana music from the grassroots up.