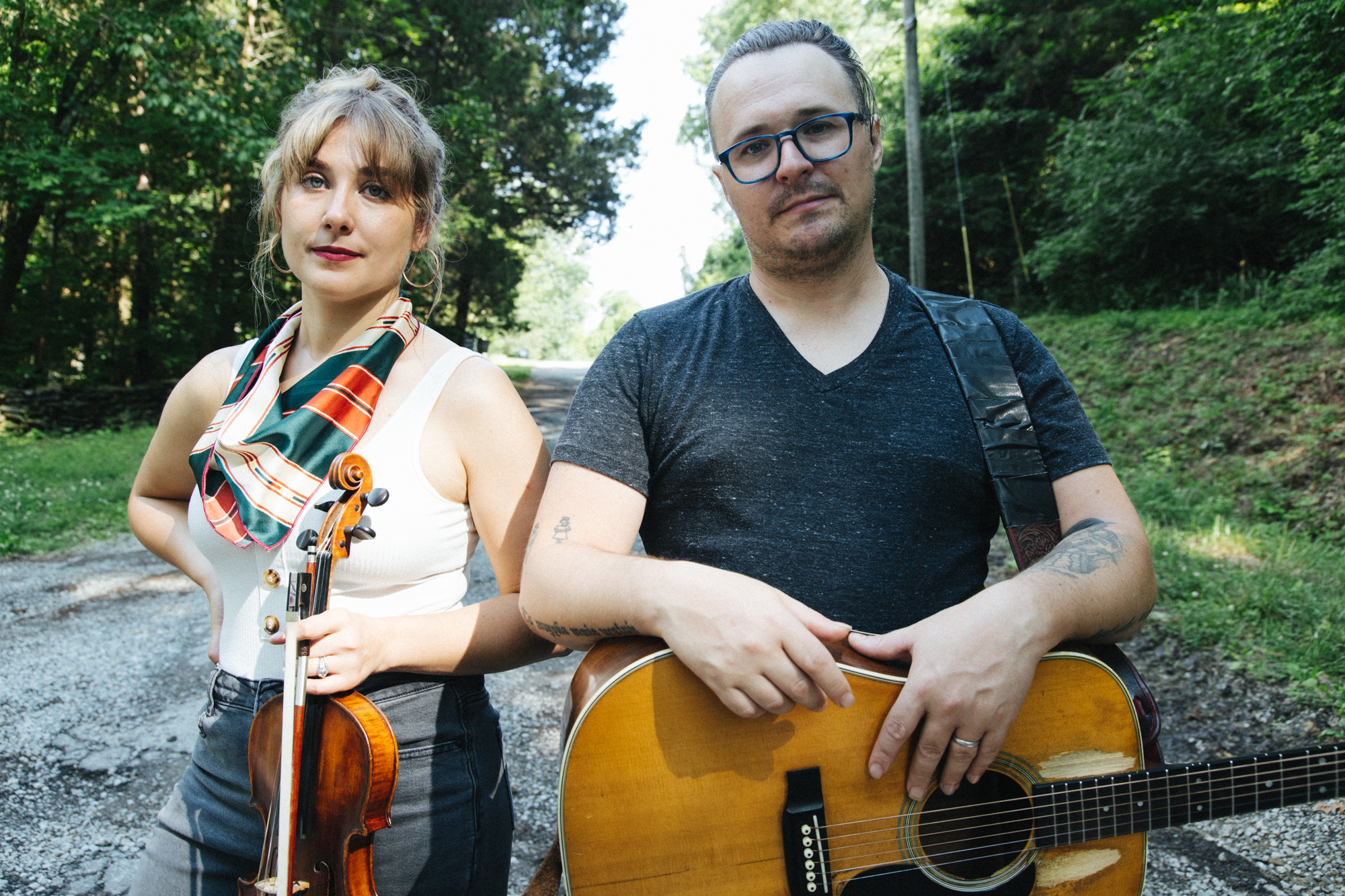 This coming Friday (8/20), Nashville-based duo Adrian + Meredith will release its sophomore album, Bad For Business, produced by Mark Robertson of The Legendary Shack Shakers. Today, DittyTV is delighted to premiere the final single leading up to the album release, “Hungover Eyes,“ a brash and bouncing song initially inspired by a friend using a dating app to get people out to one of their shows.

“While the start of this song was a funny bit about the new world of dating through an app, I think there is a bigger message here about human interaction being essential for empathetic discussion and debate, especially as the world navigates through political divides and a global pandemic,“ says Meredith. “Sometimes it’s easy to forget that there is an actual person behind the profile picture.“

1) Could you share about your musical backgrounds and how you two connected, and tell us how you landed on the specific style of Americana that you’ve become known for?

Adrian grew up on Detroit Motown music, and was heavily influenced at an early age from his Grandmother who was an organist. He started playing guitar and writing songs in college and his first bands were all in the punk world.  By the time he met Meredith in 2012 he had already shifted over to the singer songwriter Americana world though his voice and writing remained very much his own.  Meredith grew up on folk songs that her mom played on guitar, and started playing the violin in 3rd grade. In college she discovered the oldtime fiddle world and balanced her musical life between playing in her college orchestra and her college old time band.

The musical merge took years, but you can hear the combination of all of it in our music. Since touring full time together in 2014 we now discover influences together and our new material has taken on its own life, so much of it impacted by touring in Europe.

2) What was it like working with Mark Robertson as your producer on Bad For Business?

This was our second time working with Mark on a record, and as usual he has a perfect knack for pushing us both in our performance and in our creativity.  The phrase Mark uses the most in the studio is “I think you’ve got a better take in ya” and he’s usually right. A better take generally isn’t about perfect intonation or the perfect run, in those moments, he’s pushing us to perform from our gut, and he has an amazing amount of patience in waiting for the right magic moment to capture. Like all truly creative and collaborative spaces, we all get to weigh in. We argue, compromise, and stand for what we think is best, and in the end I think it always gets us to a better place.  This record in particular we wanted Mark to have some fun as a producer – We think he would agree that he did.

3) Could you give us a rig rundown and tell us what unique pieces of equipment/instruments you used for Bad For Business?

There’s a unique combination of instrumentation in our band of Pedal Steel, Brass, Banjo, etc.  Our sound is really the product of our instrumentation.  We’ve been fortunate enough to work with our friends, and get guest tracking from some of our mentors.
Our producer says we’re a rock band without any rock instruments.  All of our songs are written on acoustic guitar and fiddle, so what you hear in the records are the product of everyone involved.

4) Who else worked with you on Bad For Business, and how did they surprise you with their contributions?

When we started this record we knew we wanted to use the Nashville Horn section, but a surprising twist was getting Ken Francis Wenzel on the record playing Baritone and Tenor Saxophone. Ken and Adrian and have been best friends since 2006 when they were both roommates in DC.  After all these years, this was the first record collaboration.  Ken is amazing, we already knew that, but I think both of us were blown away by how his creative energy elevated the songs he played on.  It was so fun to work with him in the studio!

5) What’s the essential message of “Hungover Eyes,” and what inspired it?

“Hungover Eyes” was actually inspired by a funny story on the road where we were touring with another solo act who was using Tinder to get folks to come to the show. The funniest thing was that it worked!  That comical experience got us thinking and talking a lot about how humans are both more connected than ever in the digital sense but equally so isolated sometimes from human contact. While the start of this song was a funny bit about the new world of dating through an app, I think there is a bigger message here about human interaction being essential for empathetic discussion and debate, especially as the world navigates through political divides and a global pandemic. Sometimes it’s easy to forget that there is an actual person behind the profile picture.

Bonus: You’re throwing a full-band album release show on Tuesday, August 24th, at The 5 Spot in Nashville. Describe your relationship with The 5 Spot and share your most memorable experience from hanging out there.

The 5 Spot has been our home bar/venue/community in Nashville since we started spending time in the city.  It’s the only place we would want to do our record release since pretty much everyone on the record are people we met there. We call that place “Tortuga” for touring musicians – no matter how long you’ve been on the road you can pop in and see your friends and colleagues.  Many late nights have been spent there solving the world’s problems and making some too.  It is a space filled with musicians who understand exactly what you’re going through.  Whether it’s burnout from the road, or struggling with staying creative at home… It has built a beautiful supportive community.  We are incredibly grateful that The 5 Spot and many venues like it around the country survived this past year, and we are more excited than ever to get to play music on their stage again.

• Please enjoy the premiere of “Hungover Eyes” by Adrian+Meredith •