You are here: Home / News / A Look at Scott Cook’s “Tangle of Souls”

As a writer, I appreciate songwriting. But when a singer-songwriter’s CD package includes a full book—liner notes to the extreme!—then I’m doubly impressed. Scott Cook has done just that with Tangle of Souls, a 12-song album complete with a hard-cover book of 240 pages released Aug. 7.

If you don’t know Cook, who has both Canadian and U.S. citizenship, you should. Tangle of Souls is his seventh album, and he’s traveled the world playing his songs. Cook uses a string band in Tangle of Souls to convey an array of themes and then adds to the ideas in the complementary book.

In looking at the book first, it offers an introduction followed by 12 chapters, each one relating to a song on the album. He follows the chapters with an afterword (where he had time to sneak in a bit about COVID-19, among other things, before the book went to print), along with instructions on how to play his songs, recommendations for further reading, and credits. Each chapter is essentially an essay based, sometimes loosely, on the theme of the corresponding song. Throughout, Cook looks at his extensive travels, battling his own demons, and deep dives—complete with copious footnotes—into history, politics, and economics. 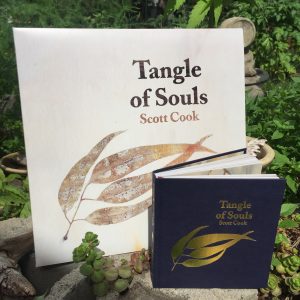 As with many folk singers, Cook is a champion of the working class, and that comes through in both the album and the book. He freely cites Noam Chomsky, Murray Bookchin, Naomi Klein, James Baldwin, Martin Luther King Jr., and others. You’ll find quotes from a smattering of writers and musicians including Walt Whitman, Leonard Cohen, Mary Oliver, Bruce Springsteen, and Woody Guthrie.

Perhaps most appealing is Cook’s plain talk—warm, inviting, nonchalant—with a philosopher’s point of view. As an example, while using numerous footnotes to back various references, perhaps the longest footnote in the book is Cook’s ranking of non-alcoholic beers.

While the book may not appeal to everyone, he certainly found his perfect audience member when I picked it up. Even if you don’t line up politically and philosophically with Cook, you’ll find that he exudes an empathy that is all too rare these days.

Although I could go on heaping praise on what is the best CD package that I have personally ever experienced, I suppose I should talk about the music, too.

Like the book, it’s a meandering of rumination and experience that offers a series of brief messages in song. From the opening track, which has the feel of a typical string-band ditty, to the final track, which is the lone instrumental, the album takes twists and turns that look at relationships and the state of the world. In “Say Can You See” (which just won third place in the Braver Angels Songwriting Contest), he offers his strongest indictment of the political system and the fact that both sides have abandoned the working class.

Hear me out for a second, this ain’t a partisan song
It ain’t about right and left, it’s about right and wrong
We’re fighting over scraps while a few are living like kings
‘Cause screwing us over’s a bipartisan thing.

Overall, the combination of music and words makes the Tangle of Souls package one that feels essential for 2020.