You are here: Home / News / 5 Questions with Her Silo

“Music has always been my connection to  feeling alive, feeling connected to others, processing the human  experience,” says Lambert, a self-described introvert. “So I want to share this album. It’s my way  of reaching out into the world, even though it scares the hell out of  me.”

With this impressive debut, we believe that Her Silo is an artist to watch in the future. DittyTV Senior Editor Tim W. Jackson touched base with this musician with the hopes that you’ll get to know her a bit better.

1) For our readers who know nothing of your background, what can you tell us about what music influenced you at an early age and your foray into songwriting?
I grew up in a religious family and for most of my childhood my exposure to music was limited to Christian music, select oldies, and some classical. My appetite for music was very deprived, and when I moved out at 18 I started buying a ton of CDs and exploring all kinds of music. One of the first bands I fell in love with was Dave Matthews Band. But the first album that really shook up my world and inspired me to learn the guitar and start writing my own music was ‘O’ by Damien Rice. When I heard that album I remember thinking “This is the music I’ve been searching for.” I think I’ve been chasing that soul-stirring emotion I felt with that album ever since, in the music I listen to and in my own songwriting.

2) Having lived in the Kirkland/Bothell area of Washington for a couple years, I can certainly relate to the environment’s influence on mood. I always told people that we put up with nine dreary months for those glorious three months of July-September. How has the Seattle area played a role in your songwriting?
I used to work in Mukilteo, just a few minutes drive from the waterfront. I’d often spend time there in the afternoons listening to the water and trying to spot seals bobbing on the surface. My favorite days were when the heavy morning fog was still burning off and the sun was just beginning to break through, shimmering on the water. I love Western Washington. I love the cleansing rain … even though the gray does begin to feel a bit heavy come February.

This area has changed so much over the years and sometimes I find the busyness and traffic a bit suffocating. But I feel a little bit of heartbreak even entertaining the idea of moving away. I don’t know how much this environment has specifically made it into the imagery in my songs, but I know it’s influenced the mood and feel, for sure. When I’m writing about struggle or darkness, I think I’m always clinging to hope, believing that eventually the clouds will begin to part, and I’ll find that light and beauty I’ve been searching for. 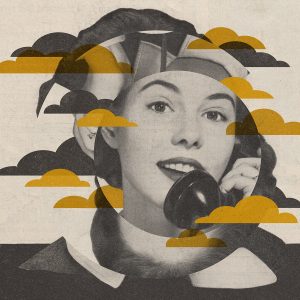 3) With your new album, Don’t Forget the Heart That’s Beating, releasing Feb. 21, what can you tell us about working with producer Joshua James and the rest of the collaborators on this project?
Joshua’s music has been a huge part of the soundtrack to the last decade of my life. I’ve really admired his work and was aware that he produced albums for other artists as well as producing his own music. When I thought about recording my own album and imagined working with a producer, it was always Joshua James who came to mind. It was such a great experience making this album with him. Not only to be in the process of making an album, but also being able to observe and learn from an artist that I’ve respected for so long. The musicians that he brought into the studio were so great, too! A couple of them play in Joshua’s band, and I’d seen them perform live with him in the past. I’m grateful for everyone who contributed to this album.

4) There’s a certain darkness to this album that I enjoy and is apparent even from the names of the songs: “Bones,” “I Should Be Ashes,” “Bring Me Down,” When Did I Give Up This Fight,” etc. What themes were you pondering as you wrote the songs for this album?
Regret, depression, insecurities, renewal, letting go, moving on … my music tends to be a tool for sorting through the darker themes and tougher parts of life. But I hope when people listen to these songs they’re able to feel the light breaking through, I hope that’s the takeaway.

5) So let’s end with a positive vision of the future: What venue could you play where you would say, “This is it. I’ve made it!” and what about that venue indicates success to you?
I try not to think of music or life in terms of “making it.” But having enjoyed so much live music in Seattle over the years, I’d have to say performing at Paramount Theatre would be a pretty mind-blowing experience. I’ve watched so many of my favorite artists perform on that stage and it’s such a beautiful theater.

Listen to the song “Bones” from the new album here.