You are here: Home / News / 5 Questions with Darrin Bradbury

Darrin Bradbury grew up in New Jersey but moved to Nashville a few years ago from Charlottesville, Va. He’s a quirky lyricist who uses humor to arrive at the truth. His new album, Talking Dogs & Atom Bombs, was just released, produced by Kenneth Pattengale of The Milk Carton Kids. This effort was Bradbury’s first for ANTI- Records. Senior Editor Tim W. Jackson touched base with Bradbury just after the release of the new album for this 5 Questions segment.

1) Your new album, Talking Dogs & Atom Bombs, was released very recently and has been getting good reviews. And I personally love your satirical humor and witty lines. So first, what can you tell me about your style as a lyricist?
I just sort of call it as I see it. Most of the tunes are just the conversations I have with myself. They’re just a reflection of my worldview. I aim for accuracy and I think that’s the point of writing. 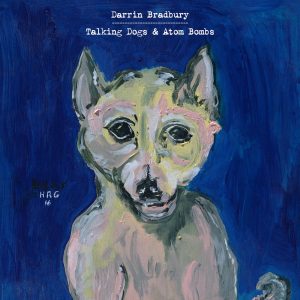 2) While I think “Motel Room, Motel Room” is my favorite song on the album, that probably says more about me and perhaps our readers don’t need to go there. So instead, let me ask you about the song “The Trouble with Time,” which features Margo Price. How did that song come about and also the collaboration with Margo?
Margo, Jeremy (Ivey, Margo’s husband), and I have been friends for a good long while. She heard the tune and it resonated with her, so she asked to sing on it. I think she’s a brilliant writer, so I was quite flabbergasted, honored, and humbled by the gesture.

3) You worked with Kenneth Pattengale of The Milk Carton Kids on this album. How did you end up choosing him as a producer?
Kenneth came to a show a few years back after hearing about me through our mutual friend Emilee Warner. Since then we’ve been pals. We got to talking and one thing led to another. He’s a real saint of a guy with lots of sage advice and great counsel. I’m grateful to have had the chance to work with him.

4) I cannot say enough how much I love your “very important PSA” that’s on your website (and embedded below). Can you give us the story on how that came about?
Well, the label made me do a bunch of these DSP (Demand-Side Platform) bumpers and I wasn’t very happy about it because I think these tech companies are whittling away at the human psyche one sponsored ad at a time. So I sent them what they requested with a little something at the end of it. I guess they thought it was funny, which is what I love about ANTI-, so we decided to make a cartoon out of it. Hopefully we’ll make more.

5) OK, we love to finish up with something a bit different. Perhaps you’re aware of the Too Much Joy song “Clowns?”  And certainly recent movie portrayals are not kind to clowns. Your mother was a circus clown. Tell us a bit about having a clown for a mom and, more importantly, from an insider’s perspective, should we, the American public, be afraid of clowns?
A few years back, I went to a Ringling Bros. clown college reunion with my mom. It took place at some beat up convention center on the outskirts of Orlando. I went in with the expectation that they’d be a happier bunch but all they did was complain about movies giving clowns a bad rap and how there’s no more good gigs left. My mother was never a scary type clown, she was more of the European, non-cake makeup type. There’s most certainly a faction of clowning that I’d consider high art. Check out some YouTube videos of Emmett Kelly (the famous hobo clown). He’s got this one skit where he sweeps up the spotlight with a broom. It’s both funny, sad, and extremely human to me. That’s what clowning is at its best.