You are here: Home / News / 5 Questions with Dan Penn

Legendary songwriter/producer/artist Dan Penn’s first new solo album in 26 years, Living on Mercy, released earlier this year on The Last Music Co. Penn, of course, wrote such classics as “Cry Like A Baby,” “Do Right Woman, Do Right Man,” “I’m Your Puppet,” “Dark End of the Street,” and many more. He produced the Box Tops’ No. 1 hit “The Letter,” written by his friend and longtime associate Wayne Carson. Penn has deep roots in the Muscle Shoals area of Alabama, which just so happens to be the same area in which DittyTV Senior Editor Tim W. Jackson lives. So Jackson caught up with Penn for this 5 Questions segment.

1) I actually know where Vernon, Ala., is and have been there. So let’s start down in Vernon where you come from. Who were some of your early musical influences, and when did you first start playing music yourself?
My early influences were Elvis, Ray Charles, Bobby Blue Bland, and Brook Benton. I started playing around 1959/1960. I wrote my first hit “Is a Bluebird Blue” for Conway Twitty somewhere around 1959. Note that Dan did a version of “Is a Bluebird Blue” for one of his own albums about a decade ago.

2) From Vernon, you started your music career in Muscle Shoals. What can you tell us about how Muscle Shoals—its studios and musicians—affected your career?
Rick Hall gave me every opportunity to succeed as a songwriter at FAME. The musicians there helped me to make it happen.

3) While you have roots in Nashville now, you may be best known for your work in Memphis, which is the home of DittyTV. What has Memphis meant to you musically over the years?
Memphis is my all-time favorite music city. I had hits there, and I loved living there. It’s a very warm place. I was honored last year to be inducted into the Memphis Music Hall of Fame. That meant a lot to me. 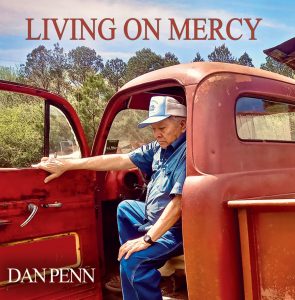 4) We’re running out of questions and still so much to cover, so let’s finally get to your new album, Living on Mercy. What can you tell us about the collaborators on the album and where it was recorded?
I chose the very best pickers around, Clayton Ivey, Will McFarlane, Michael Rhodes, and Milton Sledge. I enjoyed working with all of my co-writers, Wayne Carson, The Cate Brothers, Spooner Oldham, Will McFarlane, Bucky Lindsey, Buzz Cason, Gary Nicholson, and Carson Whitsett. I recorded the album at Creative Workshop in Nashville and at The NuttHouse in Sheffield, Ala.

5) And let’s end with the songs. You have 13 tracks on the album and so much great songwriting. What can you tell us about writing those songs, and is there one that stands out as a favorite?
I’m proud of the two I wrote by myself, “Down on Music Row,” and “Leave It Like You Found It,” and all of the others that I wrote with the guys—all of them really. I think I probably like “Edge of Love” the most myself.