You are here: Home / News / 5 Questions with Boulevards

Jamil Rashad, who performs under the name Boulevards, is set to release the Brother! EP on the New West Records imprint Normaltown Records in December. A culmination of several years of writing, playing, touring, and recording, the Raleigh, N.C.-based Boulevards’ Brother! EP is about race and reckoning in America, broken hearts, and self-inflicted suffering. It is the most explicitly political record he has done. We are happy to offer the DittyTV Debut of Boulevards’ new video, “Luv N Pain,” Sunday night, Nov. 29, at 10/9c on The Soul Side. But before that awesome debut, please enjoy this 5 Questions segment with Boulevards.

1) First, let’s get a bit of background on you, Jamil. Where did you grow up, who were your early musical influences, and then when did you decide to start performing under the moniker Boulevards?
I’m born and raised in Raleigh, N.C. My father worked at a radio station at an HBCU college and taught communications. I grew up listening to Funkadelic, Sly Stone, Rick James, Miles Davis, and of course some hip hop in there, because every kid wanted to be considered “cool.”

2) Your 4-song EP, Brother!, releases in December. What was the process like recording that EP during a pandemic, and who were the collaborators during the recording process?
The process of writing and tracking was nothing different from what I’m used to. Blake Rhein from Durand Jones & The Indications produced and composed the whole record. It was truly a blessing having him and his ideas. It was great feeding off each other.

3) Obviously you’re just now releasing a new EP, but what else have you been working on musically in 2020, and what do you think might be on the musical horizon for you in 2021?
Currently working on new music as always. Cranking out ideas and demos and digging deep for that sound for the LP. 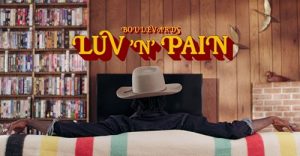 4) For the video “Luv n Pain,” we love that ’70s flair. What can you tell us about the vision for that video and how it all came together?
The video was shot and directed by Raleigh’s own Patrick Lincoln, who has worked with hip hop star Rapsody. He wanted to do something simple, a day in the life of Boulevards, getting ready for the day in his home. Dancing and reflecting about the joys of love and the pain of heartbreak.

5) As we’re offering the DittyTV Debut of that video during Thanksgiving week and your EP releases Dec.18 (which would make a great Christmas present!), let’s jump into the holidays with a fun question: What was your favorite present, and what made it so special?
We used to go see my aunt and grandma when I was a kid. We didn’t celebrate Christmas, but my aunt was always so kind and generous. She would get me video games and those Nerf guns. Also can’t forget remote control cars and trucks from Radio Shack. Those are the best.