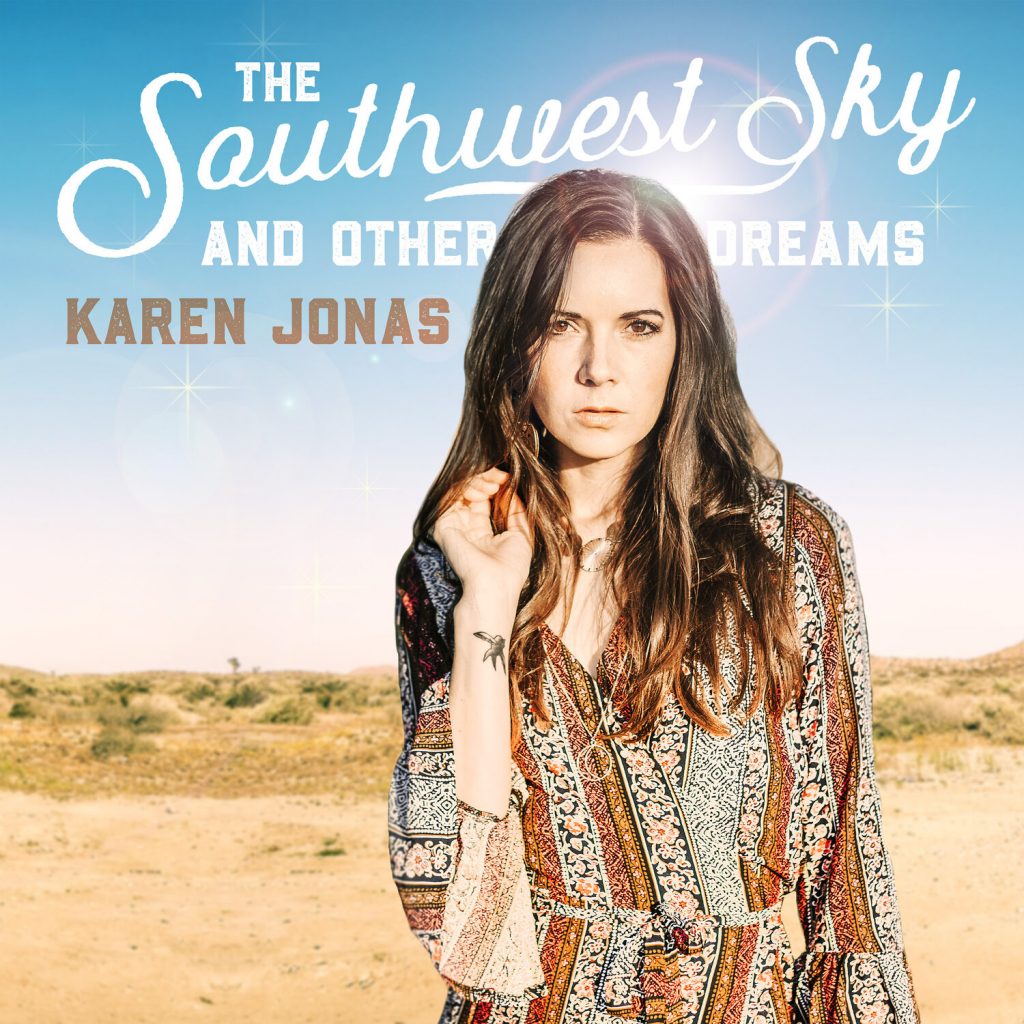 Karen Jonas’ fifth album The Southwest Sky and Other Dreams is set to release Aug. 28. Taking the vast desert expanses of the American Southwest as her backdrop, Jonas weaves small-town snapshots into vivid explorations of our inner struggle between ambition and inaction. We wanted to know a bit more about the album and introduce you to the world premiere for her song, “Tuesday,” from that album, so DittyTV Senior Editor Tim W. Jackson caught up with Jonas from her home in Fredericksburg, Va., for this 5 Questions segment.

1) It seems like it was just a couple months ago when we offered a world premiere for your video of “Ophelia.” Then I looked it up. It was nearly a year ago! So let’s start by asking what you and your band have been up to since then and how have you been handling life in quarantine this year?
The “Ophelia” video feels like both yesterday and forever ago. Time is strange, isn’t it? After we released Lucky, Revisited last July, we got straight to work on this new set of songs in the studio. Thankfully, we were able to finish the album and videos before the world shut down. Quarantine felt so stressful and heavy at first. We had to cancel our SXSW trip and our upcoming UK tour, in addition to a bunch of local shows. That was a bummer. My four kids’ schools and activities ended abruptly, and we all just sat here at the kitchen table and stared at each other for a few weeks. It’s better now though. We’ve been able to play some outdoor shows, and this new normal feels a little simpler than the old one.

2) “Ophelia” was shot in a barn owned by one of your friends and y’all had a few wasps to contend with, I understand. What sort of harrowing tales came from making the video for “Tuesday?”
Despite last year’s wasp incident, our whole band and videographer bravely reconvened for another video adventure! Our favorite venue on the new Wharf in Washington, D.C., Pearl Street Warehouse, generously hosted us to shoot this video just before the lockdowns hit. Since it’s a nice place, there weren’t any wasps or major incidents and we were able to focus entirely on making this fun video. Our biggest troubles were a toppled Scrabble board and Tim Bray’s wardrobe choices. Oh, and drinking some weird concoction of apple juice and coke in the whiskey scenes, because it was 2 p.m. and the bar wasn’t really open. See that face I make after I take a sip? Yuck.

3) And how about the song itself: What inspired the writing of “Tuesday?”
I wrote “Tuesday” one day when I was feeling overwhelmed by my grown-up responsibilities. Ostensibly, we have these endless opportunities as adults: we could move somewhere fabulous or make a big plan or get a new job. Sometimes it seems like everyone else is having adventures, and I lose track of my own story and feel stuck. “Tuesday” is about surveying all of this, becoming extremely overwhelmed, and going to take a nap instead.

And, as per the chorus, I did have a black widow infestation in my backyard a few years back. They were everywhere. It was like a Discovery Channel documentary/horror film but scarier.

4) “Tuesday is from your album The Southwest Sky and Other Dreams, which is set to release in late August. What can you tell us about the rest of the album?
Yes! This album is sharp like a cactus and a bit dusty like a big rig rolling down the highway. The 10 songs explore the difference between dreaming and living, the space between ambition and reality. There is a colorful cast of characters including a trucker at a strip club, a cowboy at a bowling alley, a suspicious wife waiting in the kitchen, and of course, me. I can’t wait for you to hear it.

5) Let’s wrap up by looking ahead. Who knows what the world will look like in late August when the new album is released, but what are your hopes and expectations on promoting the album and then for projects even beyond that?
It is definitely a challenging time to plan things. We’ve got a few tentative release shows on the books, but we’ll just have to see how things are going when August rolls around. However it goes, we’ll celebrate the album in style. We’ll have a Kickstarter preorder starting mid July, and we’ve got a couple more singles before the release, too. Be sure to follow us on Facebook to keep up with the release happenings!

Beyond that, there’s more songs to be recorded. More ideas to write. More shows to play. The rhythm of album release cycles, writing, and recording makes me feel balanced. There’s always something to look forward to.

Thanks for chatting with us, and we encourage everyone to watch the world premiere video for “Tuesday” right here. Then be sure to catch the DittyTV Debut Wednesday night, July 8, at 11/10c on The Curve.